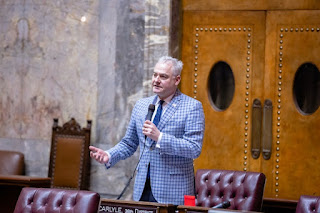 Reuven Carlyle, a commonsense Democrat from Seattle's 36th Legislative District, has announced that he will not run for a second term in the State Senate.  He began his legislative career in the House in 2008, moving to the Senate in 2015.

He has sponsored technology and environmental legislation and has been a supporter of repealing Washington's death penalty. He is credited with being able to work across party lines and with businesses.

Carlyle is credited with founding the State Legislature's Jewish Caucus .  In 2010, I attended a party for Jewish Democrats at Carlyle's home on Queen Anne Hill.

If he isn't going to run for another Senate what will he be doing next, running for King of Queen Anne Hill?