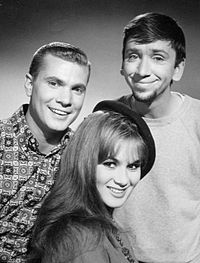 Dwayne Hickman, another black and white TV icon from the early 60s playing the title character on The Many Loves Of Dobie Gillis, has died.   Complications of Parkinson's Disease was reported as the cause.

Thought many years older than the character he played, Hickman was very relatable playing the angst ridden teen, Gillis (left in picture) along with Bob Denver's hilarious portrayal of beatnik (right in picture) Maynard G. Krebs.

On the show he had the hots for Tuesday Weld but so did Warren Beatty, guess who won? He finally got Zelda the brainy one, he should have picked her from the start.