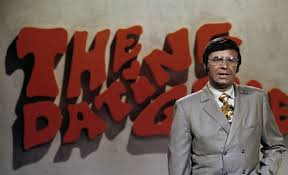 Folks my age would be more likely to remember the show than Jim Lange, but the former host of The Dating Game is dead at 81.  The Dating Game was a daytime show that ran from the mid 1960s to the early 1970s on ABC , a network that seemed to excel at marketing to America's youth.  Lange, who was also an LA DJ, was animated and telegenic.
The concept of the show was similar to the to today's The Bachelor, except that it took 15 minutes for the subject to pick a date, rather than a season.  Also, the subject would not see the eligible bachelors or bachelorettes and marriage was not even in the conversation.
With the chirpy music of Herb Albert And The Tijuana Brass in the background the show was fast moving and hip.  The trademark of the show was at the end when the couples would come out at the end and along with Lange, blow a big kiss to the audience.
TV writer and blogger Ken Levine has this tribute to Jim Lange.
Posted by Mike Barer at 7:44 PM 0 comments

Trouble At The Bay! 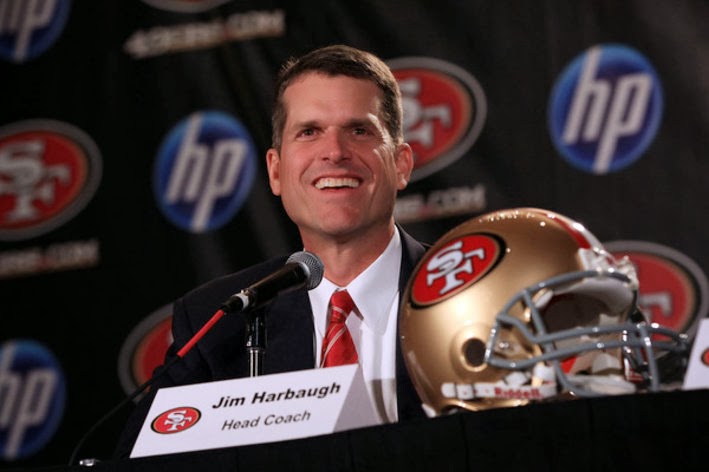 Did anyone see this coming?  Word has gotten out that the San Francisco 49ers tried to trade their coach to the Cleveland Browns.  Coach Jim Harbaugh who most fans feel has lead the Niners back to the glory days, may see the end of his days at San Francisco.  While being known as a winner, Harbaugh is known for marching to his own drum.  That is not always good in businesses minded pro sports.  Owners and General Managers like to win, but they also like to be in control.  Word is that the relationship between the coach and the front office is souring fast.
Although the tight lipped usually scowling Harbaugh is universally loathed by Seahawk fans, there is no doubt the rivalry has been good for the 'Hawks and it's fans, it has become one of the best rivalries in Seattle sports history and although wins are nice, they are even sweeter when someone can wear the "black hat" like Coach Harbaugh.
Posted by Mike Barer at 10:44 PM 0 comments

Journey To The Bottom Of The Gorge II 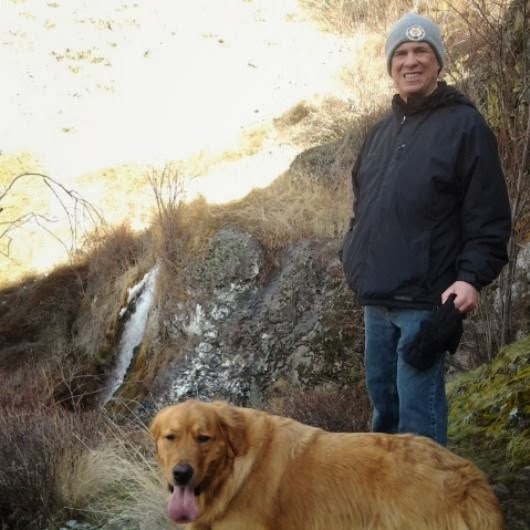 This picture of Dasher and Me, that Deb  took got around 70  likes on facebook.  The 3 of us hiked down the Columbia River Gorge trail on February 16th.
Posted by Mike Barer at 5:49 AM 0 comments

Reports have said that Wide Receiver Sidney Rice will be soon be cut from the Seahawks.  The ex-Viking did not endear himself to some local fans after he drew an unsportsmanlike conduct penalty for spinning the football in a game against the San Francisco 49ers.  More likely though, the roster change had more to do with Rice being out the second half of the season including the playoffs. Rice's release will reportedly clear about 7 million dollars in cap space for the team.
Posted by Mike Barer at 2:29 PM 0 comments 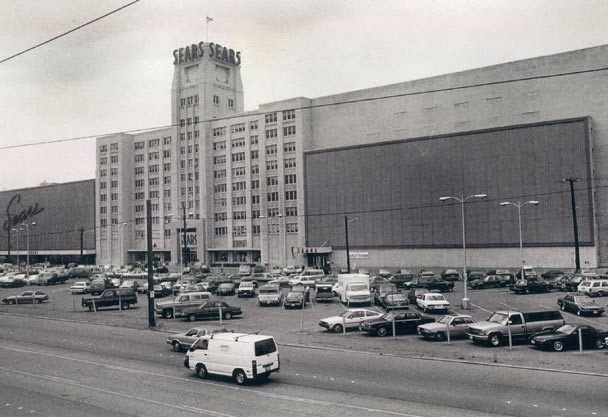 It has been announced that Sears will pull out of it's Sodo (South Downtown) location this year.  Radio reports said that it was the oldest continuous operating store in existence, however, I was unable to find anything to back that up.  The historic building is located at 76 S Lander Street and has been a visible but quiet landmark of the area once named for being south of the dome.  The building also houses the world headquarters for Starbuck's, which moved to the location in 1997 and put it's logo on the tower.
Once the nations top retailer, Sears has struggled in recent years and has lost market share to online retailers and brick and mortar competitors like Target and Costco.
Posted by Mike Barer at 12:15 PM 0 comments

Journey To The Bottom Of The Gorge 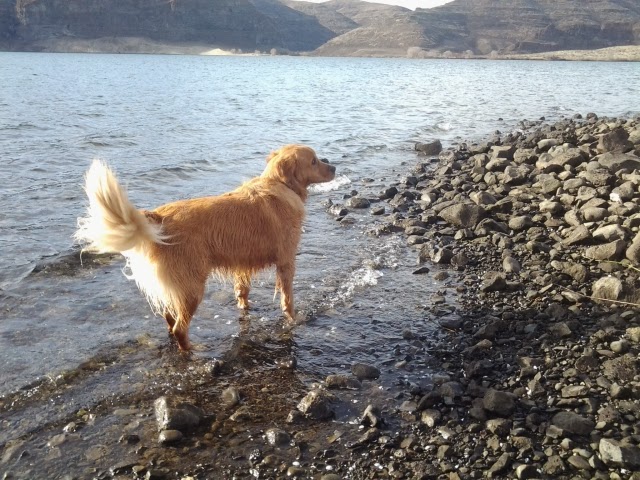 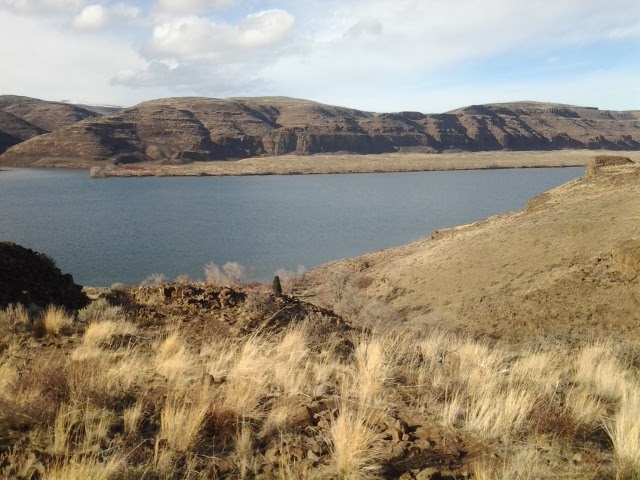 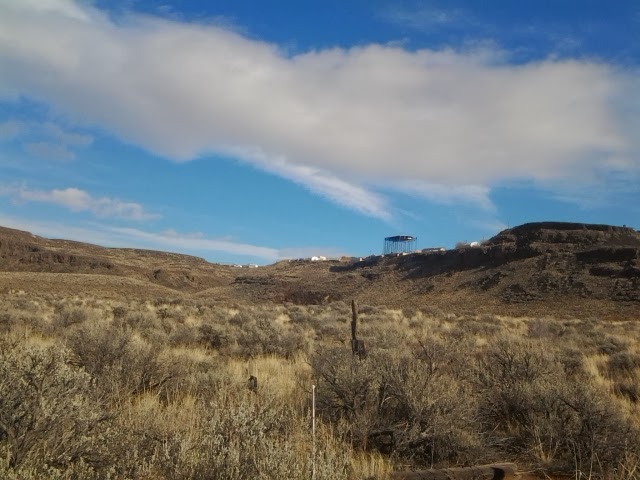 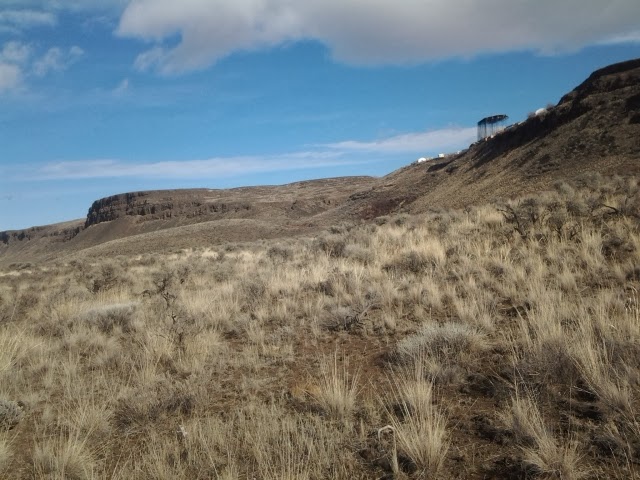 Beautiful weather was in store for us yesterday as we hiked to the bottom of the Columbia River Gorge from the Cave B winery.  The hike was about 2 miles each way and took a total of 3 hours.
Posted by Mike Barer at 9:03 AM 0 comments

This weekend we stayed at the Cave B Winery at the Columbia River Gorge in Central Washington.  The views from our room were breath taking.  We had an excellent 5 course dinner on our night of arrival which was Valentines. Day. We also enjoyed wine tasting in that afternoon. 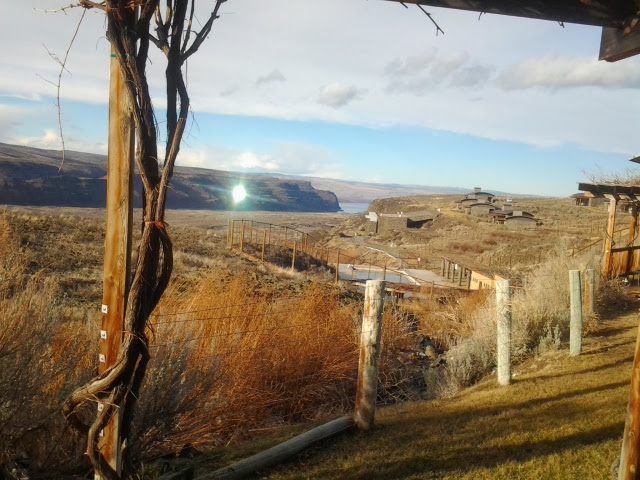 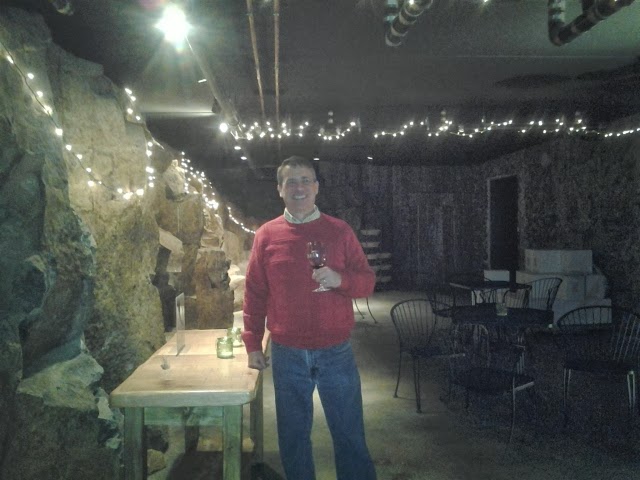 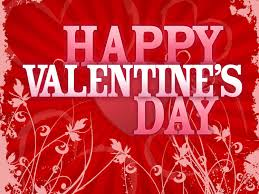 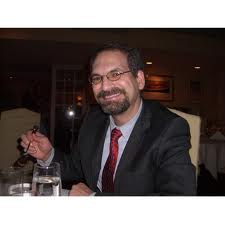 Congratulations to my brother, Danny for being named one of LA's Super Lawyers for the 10th year in a row.  Danny has been practicing in Los Angeles for almost a quarter of a century.

12th Mench Gets In The Act

The JT News, the region's Jewish newspaper got in on Seahawk mania with this picture on it's cover. 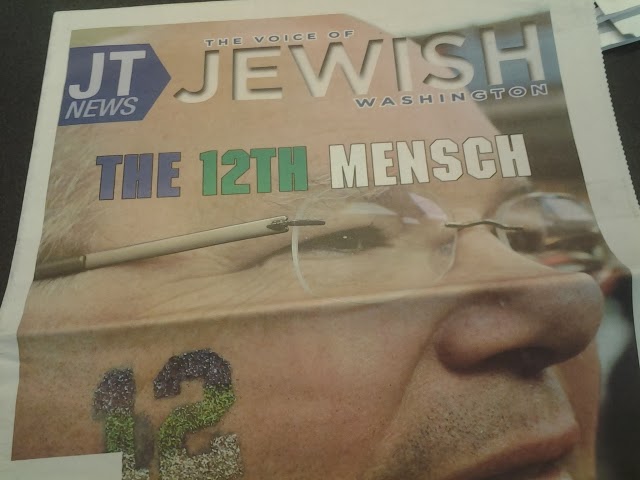 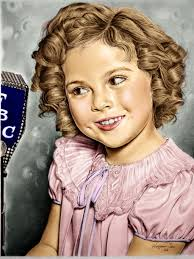 Shirley Temple, child movie star from Hollywood's golden era is dead at 85.  She also had a career as a diplomat in the late 60s.  A cancer survivor, her death was attributed to natural causes.  You can read about Temple's life here.
Posted by Mike Barer at 6:36 AM 0 comments

The Night That Changed America

The two surviving Beatles, Paul McCartney and Ringo Starr, return to the Ed Sullivan Theatre where they made history 50 years ago.
Dave Letterman joins them on their return, part of a CBS special. 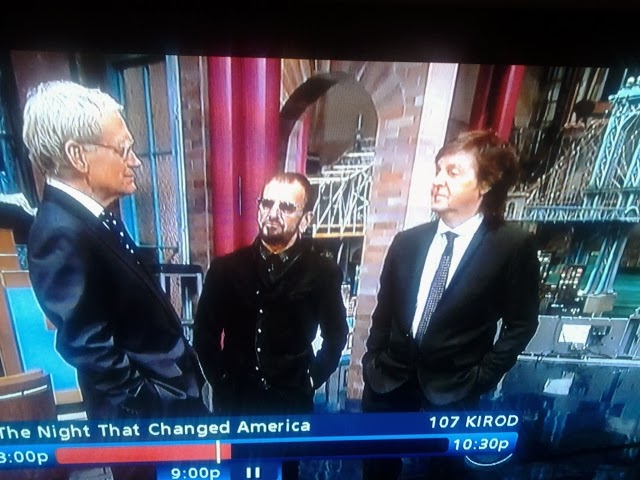 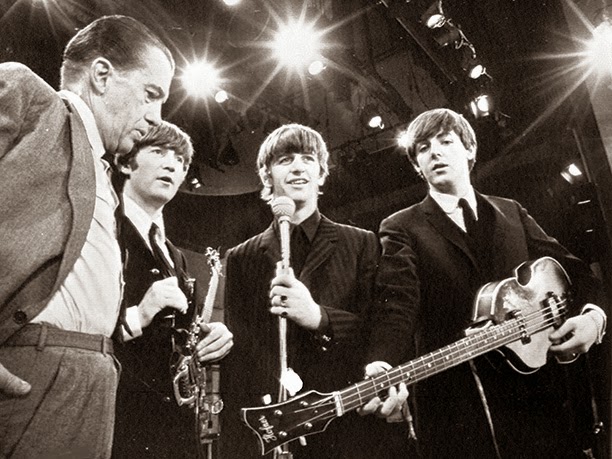 To celebrate The Beatles appearance on Ed Sullivan, you should understand the times.  It was 1964 and the world was in kind of a funk.  President Kennedy had been shot and killed a couple of months before and the youthful president who represented the future was replaced by Lyndon B. Johnson, a somewhat unpopular former senator.
The Beatles wore what looked like suits and had hair cuts that no one had seen before.  As I remember it (I was only 6), we would gather to watch Ed Sullivan every Sunday night.  I recall being confused by the haircuts and all, beat it didn't take long for me to be a full fledged Beatles fan.  The earliest songs I remember are "Can't Buy Me Love", "I Wanna Hold Your Hand" and "Can't Buy Me Love".  Soon there was a Beatles cartoon that ran on Saturdays.  It would feature 2 cartoons which featured a Beatles song and a singalong between them,   The Beatles did not provide the voices for the characters.  I also got to see "A Hard Days Night", the first Beatles movie at the Liberty Theatre.  I also bought Beatles bubblegum cards around that time at the grocery store at 3rd and Yakima in Walla Walla.
Posted by Mike Barer at 6:43 PM 0 comments

Email ThisBlogThis!Share to TwitterShare to FacebookShare to Pinterest
Labels: Ed Sullivan, The Beatles

An Evening With Jerry Seinfeld 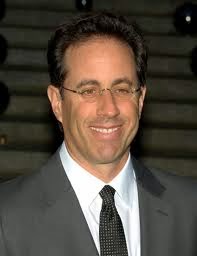 Deb and I, along with our usual gang, went to see the second show of Jerry Seinfeld at The Paramount in downtown Seattle last Friday.  He had a show earlier in the evening.
Jerry Seinfeld is probably the wealthiest comedian on the planet, so either he enjoys stand-up or he needs a reason to get away from his wife of 14 years.
Most people missed the irony of the Frank Sinatra voice track that played while everyone was being seated (not part of the show).  Sinatra died, the evening  that the final episode of Seinfeld aired.
Seinfeld started the show with obligatory congratulations to the city over the Seahawks Super Bowl victory, then in his trademark exasperated voice quipped, "have some consideration for the rest of us". His slice of life humor included the reason he decided the audience was there, it bought the expensive tickets because (paraphrasing) it needs things because life sucks.
He went on to cover his observations on life, food, drink, possessions, technology dependence, marriage and death.
Mario Joyner, also a slice of life commedian, but with a more rapid fire delivery, opened the show. 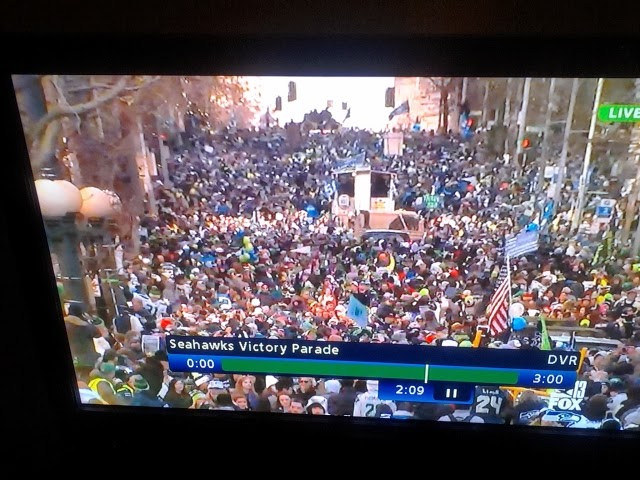 Email ThisBlogThis!Share to TwitterShare to FacebookShare to Pinterest
Labels: Seahawks 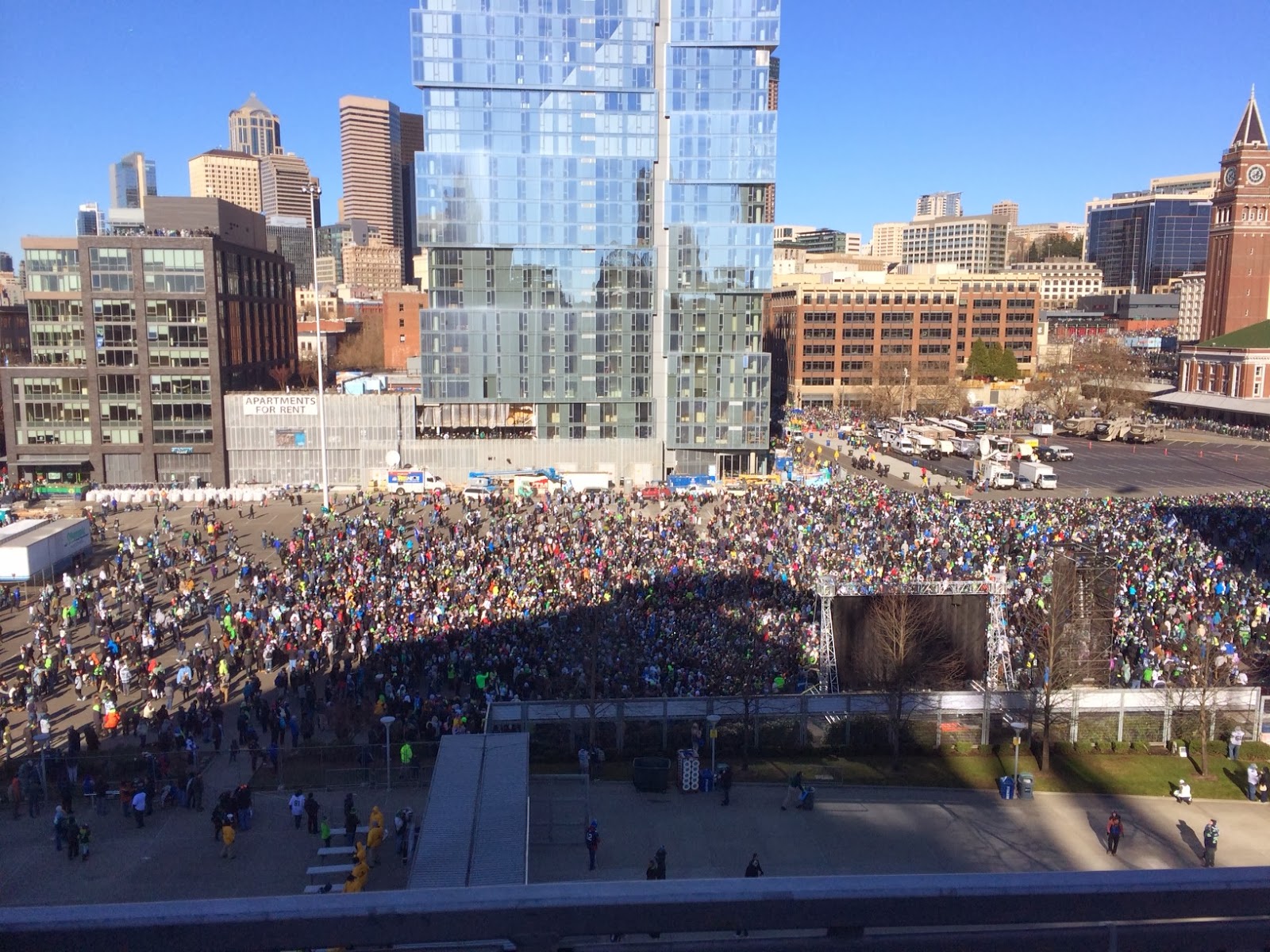 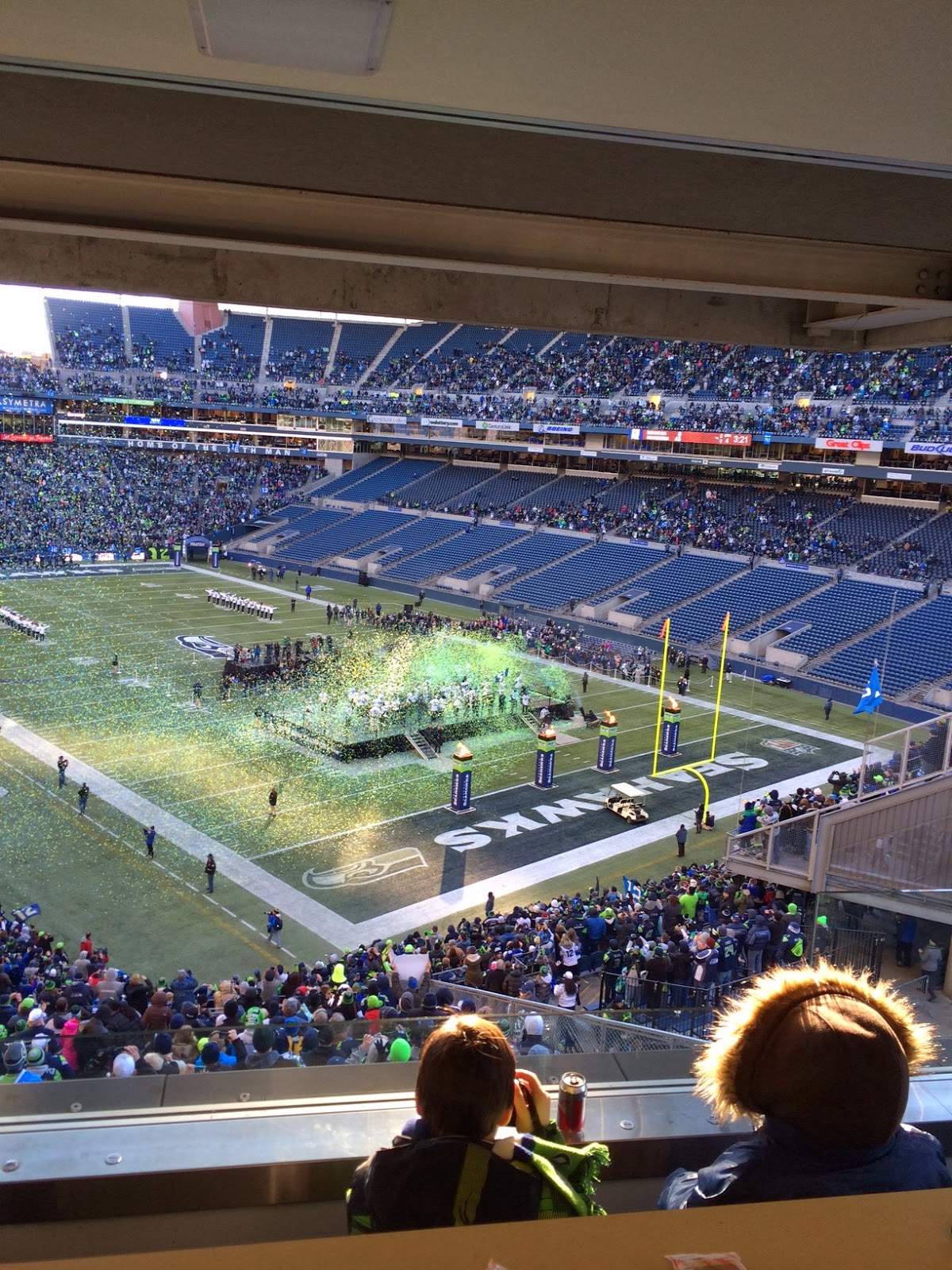 The city threw a party and everyone came!  Approximately 1 million people lined the Seattle streets to celebrate the Seahawks Super Bowl victory over the Denver Broncos.  I was not able to attend the festivities, but my cousin Aaron did and was kind enough to provide these pictures, shot at Century Link Field where the Seahawks play.
Posted by Mike Barer at 8:04 PM 0 comments

The late Bobby Darin, known for teen music years before, launch into political activism in later life and did this folk tune
Posted by Mike Barer at 6:26 AM 1 comments 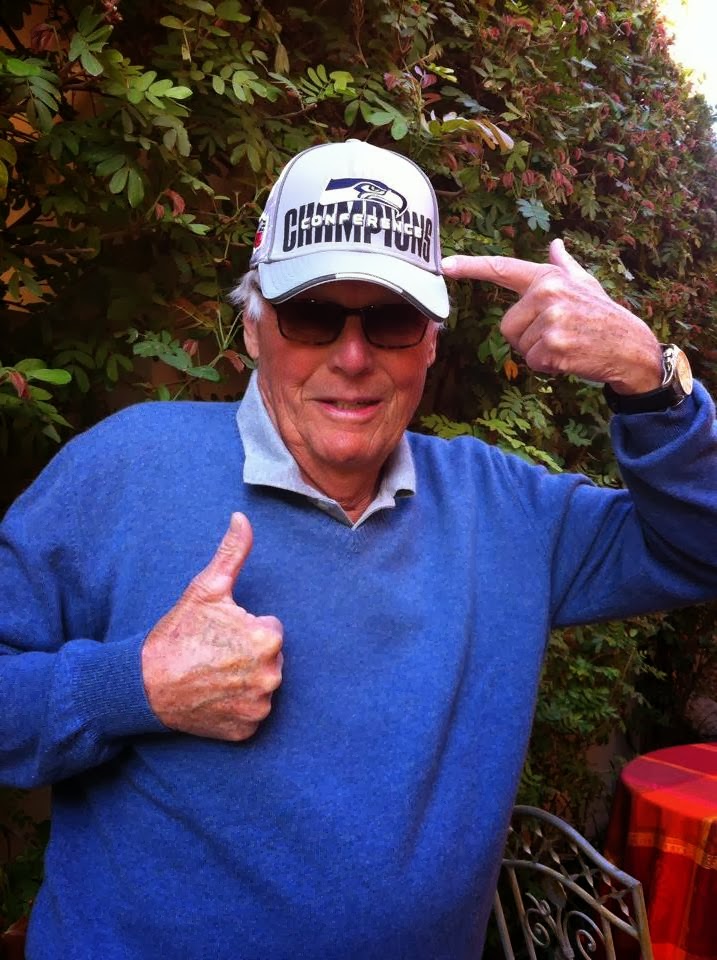 Walla Walla native Adam West, TV's Batman, poses with his Seahawk cap.  He has not forgotten his Washington roots.
Posted by Mike Barer at 8:49 AM 0 comments

Seattle Will Hold Parade For Seahawks 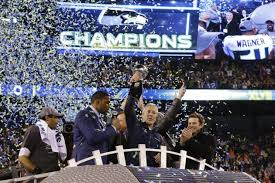 The Seattle Seahawks will celebrate their Super Bowl victory will a parade in Downtown Seattle tomorrow (Wednesday February 5th) at 11am.  The parade will start at 4th and Denny and continue to Century Link Field.  Some private schools have closed, but Seattle public schools will hold classes as scheduled.
Posted by Mike Barer at 8:43 AM 0 comments 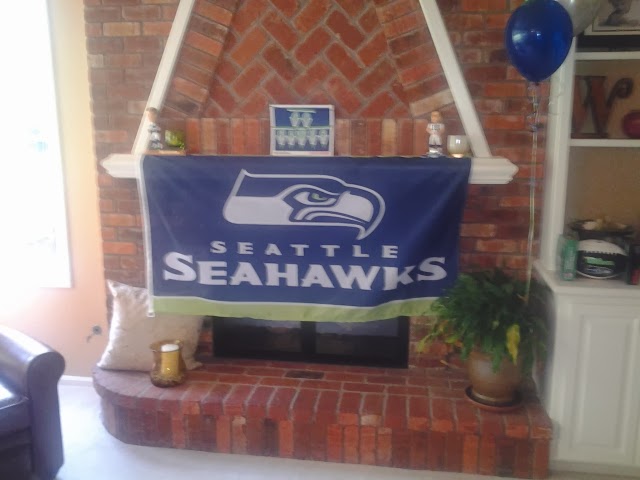 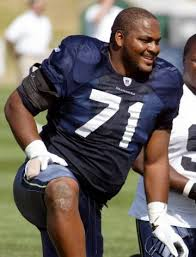 On the eve of the Seattle Seahawks second appearance in a Super Bowl, the man who gets a great deal of credit for the team's first has received good news.  It was announced today that 'Hawk left tackle Walter Jones was selected to enter the Pro Football Hall Of Fame.  Jones, who retired in 2009, is widely regarded as one of the best that the game has seen.  He is third player to enter the Hall that has played his entire career in Seattle.  The other two are Steve Largent and Cortez Kennedy.   Other Seahawks in the Hall include Warren Moon, Carl Eller, and Mike McCormack. 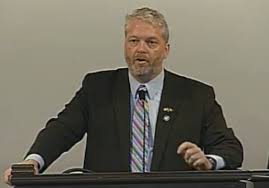 State Democratic Executive Director Jaxon Ravens will now be Chair of the Washington State Democrats. Dana Laurent, a successful fundraiser for Democratic causes was runner up.  Ravens was chosen by the Democratic State Committee, which consists of a combinations of two representatives, from each county in the state as well as 2 reps from each of the state's legislative districts.  The committee meets quarterly at different venues throughout the state, this time it was at the Hilton in Vancouver.
Ravens had a commanding lead after the first ballot, but with 3 other contenders, failed to amass a majority.  Bottom two candidates Jay Clough, an Eastern Washington former congressional candidate and Jim Kainber, a former party executive director, were dropped and a second ballot was taken.
The excitement of the Seattle Seahawks advancing to the Super Bowl was not lost on the group as committee members were clad in blue and green, and many answer the role call with "Go Hawks!"
Posted by Mike Barer at 3:25 PM 0 comments

Right across from the hotel where the Democratic State Committee meeting is being held, a pep rally for the Seahawks. 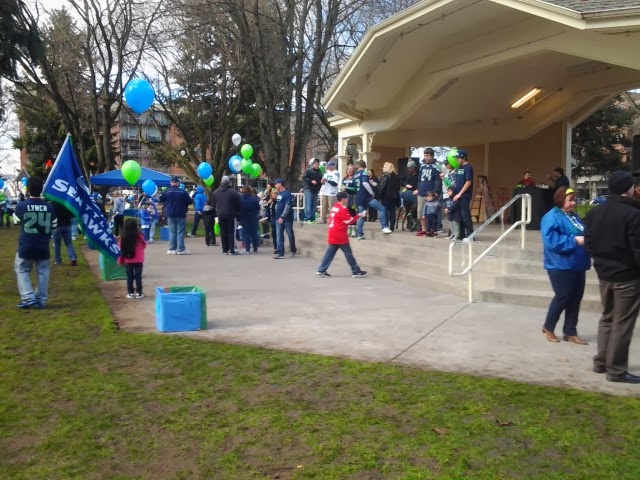