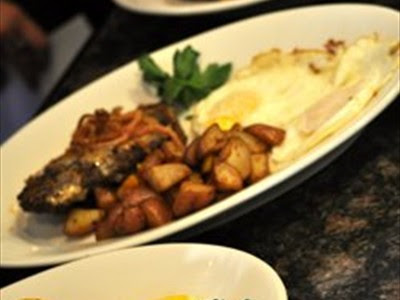 We had dinner last night at the 2seven 2Grill and Bar 27120 174th Place SE in Covington, WA (just outside of Maple Valley. It is locally owned, has an excellent menu, and has live entertainment. The service is excellent, is the food. We saw the Doug Cassell Band, which played classic rock (music from my high school and college days).
It is good to know that residents of Maple Valley, Black Diamond, and Covington have a fun place to go at night.
Posted by Mike Barer at 2:07 PM 0 comments

My Name Heard Around The World? 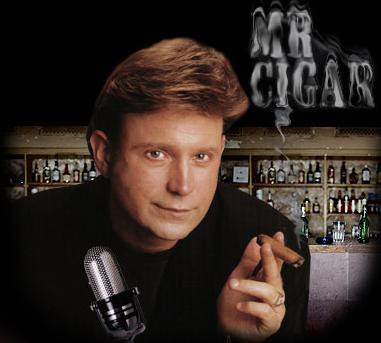 How many listeners does "Outlaw Radio" have? I wrote a thought on the guestbook on "Outlaw Radio" a crazy gathering of old DJs and LA characters that includes my cousin Burl Barer, heard only on the internet. I was a little shocked to hear them read the entry on the air. I was a little nervous that they may be a little less than nice, but Matt Alan, the host (pictured above) was actually pretty even handed and somewhat complimentary to me, preferring to use the opportunity to skewer Burl, which Alan does quite frequently. Who listens to Outlaw Radio? I don't know, but it's another couple minutes on my allotted 15.
Posted by Mike Barer at 5:14 PM 0 comments 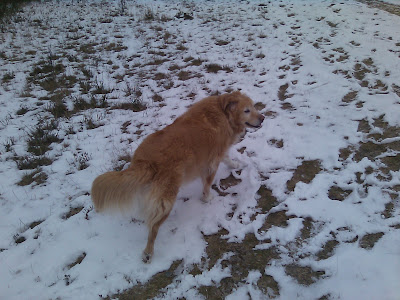 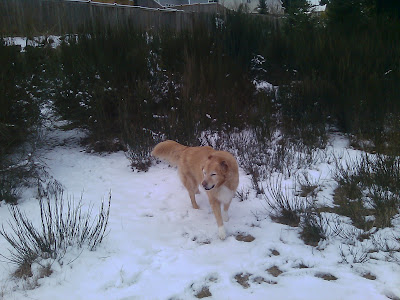 One thing that hasn't changed over the years is Rusty's love of the snow. Here we are on the pipeline trail in Maple Valley.

Updated--More Snow In The Area 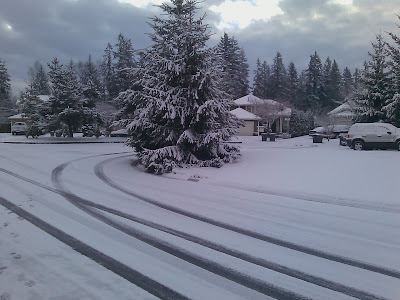 It snowed furiously last night. This picture was taken from our house in Maple Valley.
Posted by Mike Barer at 9:23 AM 0 comments 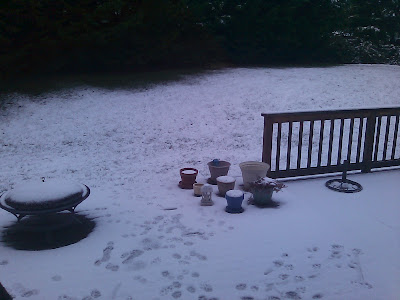 This is our yard, from this morning in Maple Valley. So far, snow accumulations have been low, but a lot can change in the next few hours. 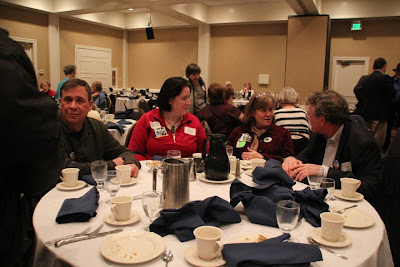 I ran across this picture of Jennifer Sutton and I representing the 5th LD at the Washington State Democratic Luncheon from last January. Also outgoing state committeewoman Di Irons on right.
Posted by Mike Barer at 6:18 AM 0 comments

Barers Of Maple Valley Goes To The Desert 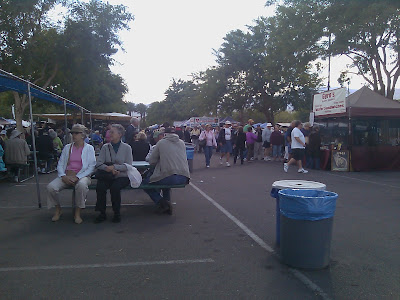 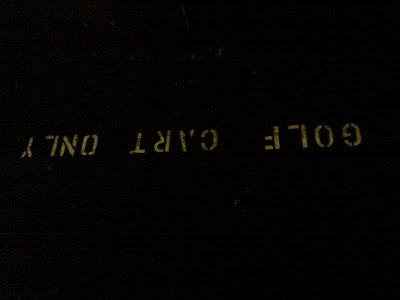 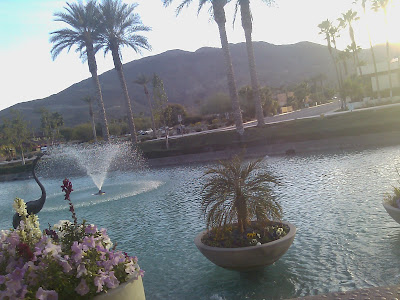 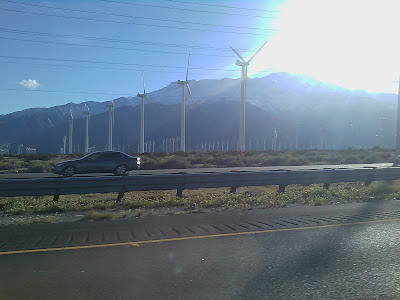 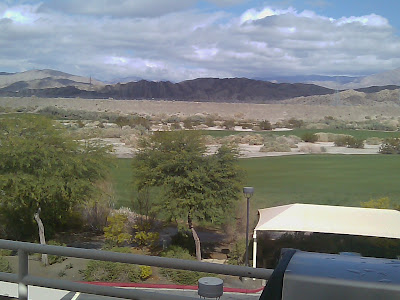 We left for Palm Springs last Wednesday expecting to catch an early morning flight, only to find out that our plane had been delayed until 1. We decided to try to get on an earlier flight and after a couple of failed attempts, we were able to grab another morning flight to Oakland. Once there, we had to find another flight to Ontario, where we would rent a car and head another 100 miles to Palm Springs. We finally made it to Ontario around 7. We where too late to attend a show at McCallum with my Dad and Jean, however, they where able to give away our tickets. We finally arrived at 8:30 to my Dad's condo in Rancho Mirage.
The next day, was sunny and we went to the pool. We went to dinner that night at "The River", a stylish shopping mall in Rancho Mirage. The third photo from top shows the man made river. The name of the restaurant was Acqua Pazza Bistro. After dinner, Deb and I took them back and we headed to the Thursday Market in Palm Springs. After checking out the vibrant night scene, we spent a little time at the Spa Resort Casino.
On Friday, I met up with my Dad and Uncle for coffee, later joining my Dad's old friend, Andy Epstein for lunch at The Palms.
We moved over to Indio, where we would stay with thein-laws at their time-share (5th picture down is the view from the balcony. I noticed that some supermarkets had parking spots for golf carts (second picture down).
Saturday, it was a trip to the Market at the College Of The Desert in Palm Desert (top picture). We then went to the Living Desert, which is the local Zoo. We ended the day at a Mexican Restaurant in Palm Desert.
On Sunday, we met with my brother and his wife, then headed drove back to Ontario, fourth picture is one section of the many windmills that are seen as you enter or leave Palm Springs from the West. We had a smooth flight home.

Perhaps it was this ad that starting both football fans and non football fans to watch the Super Bowl for the commercials. This ad is considered one of the best because it is so easy to relate to the child.
Posted by Mike Barer at 8:29 PM 0 comments 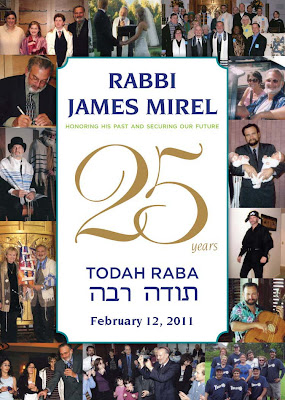 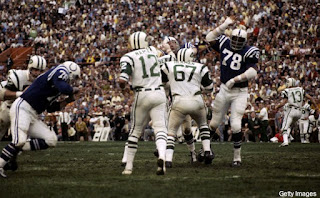 By the time Super Bowl III came around, anyone who was paying attention thought that the NFL was superior to the AFL. Would the Super Bowl survive had the Colts beat the Jets? We will never know. Although the Jets upsetting the Colts was the headline of the period, I think that Super Bowl III will be remembered for two opposing legendary quarterbacks, one representing The Establishment (Johnny Unitas) and one representing the youth rebellion of the time (Joe Namath).
The Colts, who had already won 2 NFL titles, would bounce back in a couple years to get their Super Bowl trophy. After 42 years, the Jets have never been back.
Posted by Mike Barer at 8:55 PM 0 comments 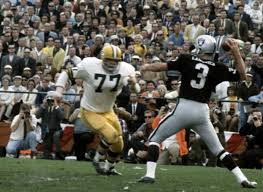 This was the first Super Bowl that I ever watched on Television, The Green Bay Packers lead by legendary coach Vince Lombardi and quarterback great Bart Starr beating the best of the AFL, the Oakland Raiders. Little did anyone know, the immediate future looked better for the Raiders. It would take almost 30 years for the Packers to even participate in another Super Bowl.
That year I rooted for the Raiders because the Packers had knocked my favorite team, the LA Rams out of the play-offs.
Posted by Mike Barer at 11:08 PM 0 comments

The Pack Is Back

The Green Bay Packers won their 4th Super Bowl last Sunday. The Pittsburgh Steelers to whom the Packers beat have won 6. However, putting it in historical perspective, the Packers have won 13 NFL Championships. That is what the Super Bowl now signifies.
Green Bay won the first two Super Bowls with what was a team of legends. There coach was Vince Lombardi, the man to whom the trophy was named after. They had such legends as Bart Starr, Ray Nitschke, Paul Hornung, Boyd Dowler, Willie Davis, and Jerry Kramer. After Lombardi left the team, the Packers languished.
Coach Mike Holmgren took over in the 90s and finally brought the "Pack Back", after Holmgren left for our Seahawks, the team stayed strong and finally returned the crown this year. Green Bay Quarterback Aaron Rodgers threw for 309 yards and three touchdown passes.
Posted by Mike Barer at 10:42 PM 0 comments 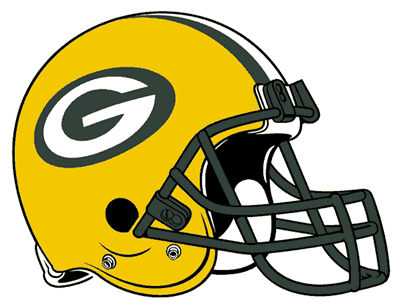 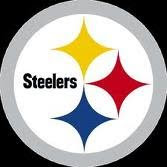 Colin Cosell--Lighter Side Of Sports


He is the grandson of legendary sportscaster Howard Cosell. Colin Cosell acually seems rather humble, but seems to carry on the legacy well.
Posted by Mike Barer at 1:05 PM 0 comments 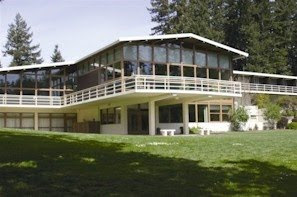 Safety on the trails and in local schools was the topic in a Maple Valley town meeting that took place January 31st at the Lake Wilderness Lodge. The meeting was called in response to a shooting that took place on the Lake Wilderness Trail in which a man and woman were injured.
It was reported that both shooting victims have been released from the hospital and the shooter was still in custody.
The room was packed with concerned local citizens. Maple Valley Police Chief Michelle Bennett conducted the meeting, which included law enforcement officers who were experts at dealing with gang activity and drug enforcement. The Tahoma Assistant Superintendent also spoke on how area schools were dealing with potential problems.
Posted by Mike Barer at 11:12 AM 0 comments

Kathi Goertzen: "I refuse to let this brain tumor define who I am"


Barers Of Maple Valley extends it's thoughts and prayers to KOMO TV Anchor Kathi Goertzen, who will undergo another surgery in her decade long fight with a brain tumor.
Posted by Mike Barer at 6:22 AM 0 comments

Did State GOP Blow It With Wilbur Selection 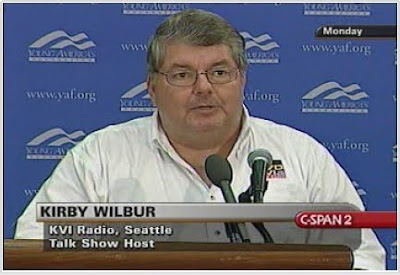 Talk radio blog Blather Watch reports that Kirby Wilbur may not be happy with his new positon as head of the Washington State Republican Chair. The former KVI talk show host was quoted saying

"He says wistfully, “If [Fisher] called tomorrow and said we want you back on mornings for a quarter of my old pay, I’d tell the Party in a heartbeat: ‘I’m outa here.’” You can read the story by clicking here