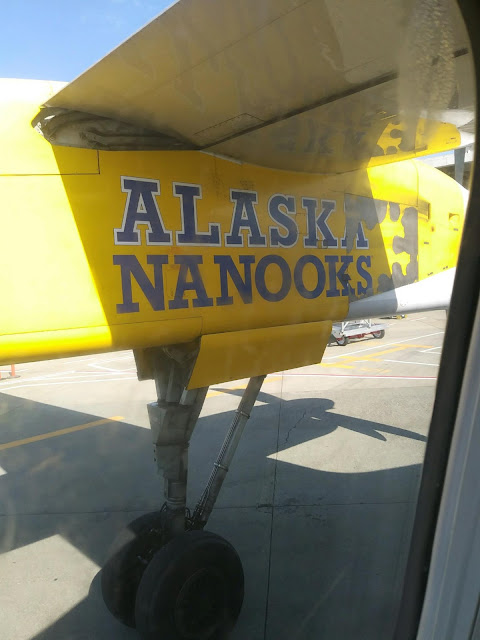 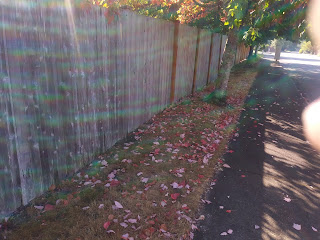 Walking through Bellevue Park, I was impressed by the fountain. 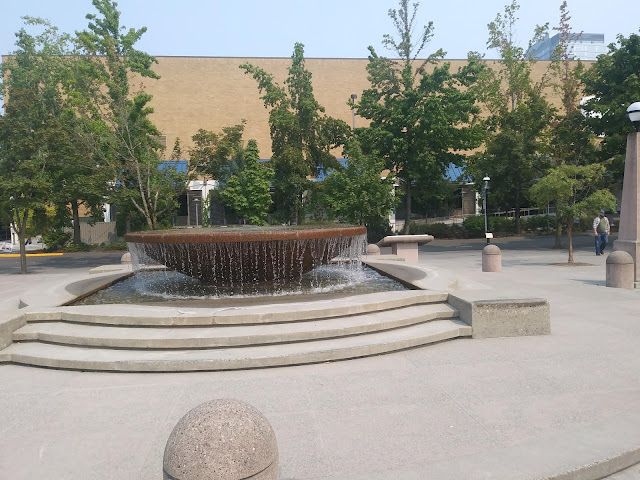 Email ThisBlogThis!Share to TwitterShare to FacebookShare to Pinterest
Labels: Bellevue 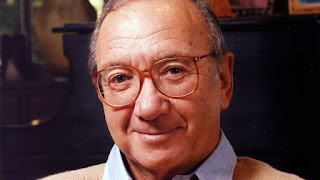 Neil Simon, who along with Mel Brooks and Carl Reiner, seemed like the last of the great funny writers of my lifetime, died this weekend.   Simon was probably best known for The Odd Couple which turned into a movie and later a hit TV show.  He also was known for writing Barefoot In The Park and Brighton Beach Memoirs.
He was born Marvin Neil Simon in The Bronx, New York. 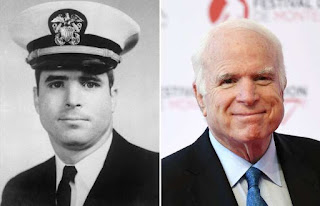 The Covington Maple Valley Reporter which finds it's way to the doorstep every Thursday, mentioned something about a Maple Valley You Tube Channel. Here is an interesting cut that I found.

I'm not sure who this gentleman is though.
Posted by Mike Barer at 12:12 AM 0 comments 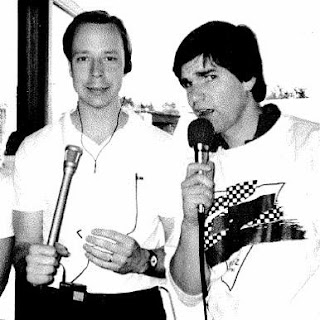 Kent Phillips posted this picture on Facebook on Monday in honor of National Radio Day.  They still do mornings on Star 101.5 in Seattle.  Station officials say that Kent and his partner, Alan Budwill are part of  the longest running radio show in Seattle history.  They have held the morning spot for over 32 years.
Kent Phillips worked at KUJ in Walla Walla while attending Whitman College. He was the debate partner of a good friend of mine.  Their producer, Leonard is also a family friend.
Posted by Mike Barer at 9:10 AM 0 comments 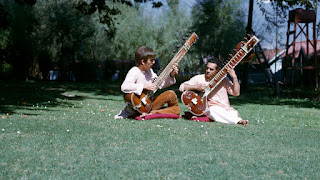 It can arguably be said that at the  time of the Beatles break up, George Harrison  experienced the most growth as an artist.  His songs, Something and While My Guitar Gently Weeps have become such classics, that they have been remembered as HIS songs as much as Beatle songs.   His solo career also yielded many classics including My Sweet Lord and What Is Life.
The show lasts 3 and a half hours, but is never boring. It covers his rise with the Beatles, his emersion into Indian Culture, where he learned the to play the sitar (shown above),  his post Beatle projects and his spirituality.
There are interviews with fellow artists both past and present, living and dead, fellow Beatles,  and his family including his son, and both his ex wife Pattie and his widow, Olivia.
The documentary was directed by Martin Scorsese.  It was released in 2011 and won Emmys for Non Fiction Special and for Direction. 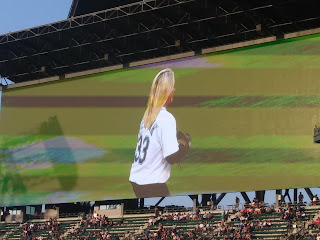 Seattle Mariner's broadcast host Angie Mentink opened the team's series with the Dodgers by throwing out the ceremonial first pitch to her son, Chase.      There was  a good video of this on twitter.
Mentink has recently overcome a bout with breast cancer.
Posted by Mike Barer at 7:01 AM 0 comments

Three time Cy Young winner Clayton Kershaw of the Dodgers is on the mound against our Mariners.  I think we are starting to get to him. 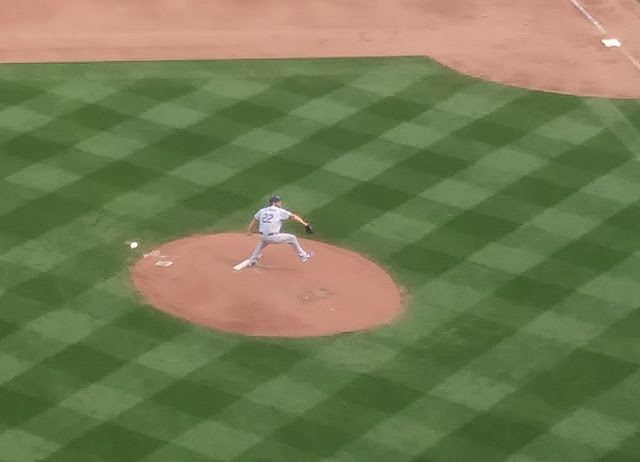 Spent a warm Saturday afternoon with friends at Wild Waves in Federal Way.  Thank you to Leonard and Marjie, for getting tickets. 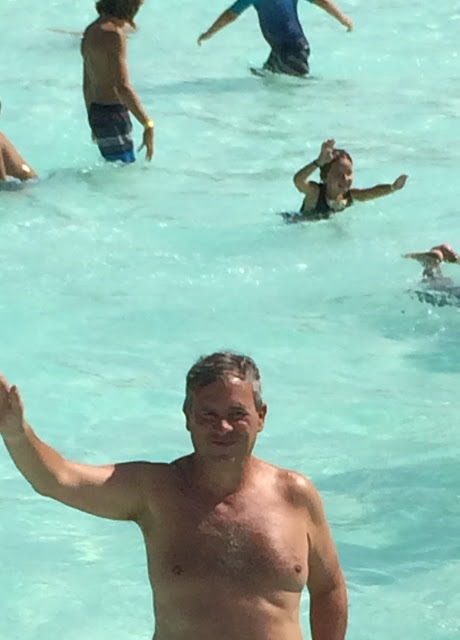 My Aunt In The Walla Walla Union-Bulletin 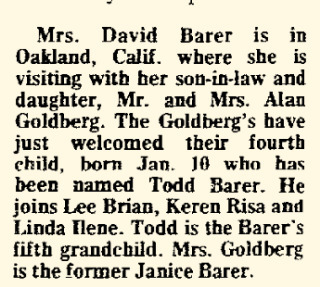 I was amused to see my Aunt Dorothy mentioned in this article in the feature section of the Walla Walla Union-Bulletin.  She would eventually have 3 more grandchildren.  Tod, whose first name was misspelled in this article, is now an author.
Posted by Mike Barer at 5:06 AM 1 comments 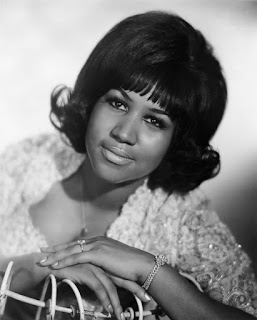 Aretha Franklin, a titan of pop music in our time, died this morning.  She was 76.
ABC news called her a "cultural icon".  Franklin's career spanned 6 decades, and was the first woman inducted into the Rock And Roll Hall Of Fame.  She earned 18 Grammys and was awarded the highest civilian honor, the Presidential Medal Of Freedom.

Trees were left standing and everything was cleaned up.  A big thank you to Estate Fence Supply. 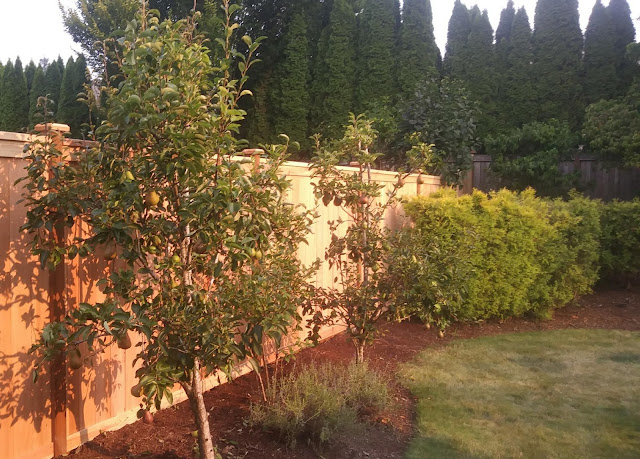 Estate Fence came in Monday and within hours replaced a section of our fence.
Our gate, which had to be pushed up to lock, was also replaced. 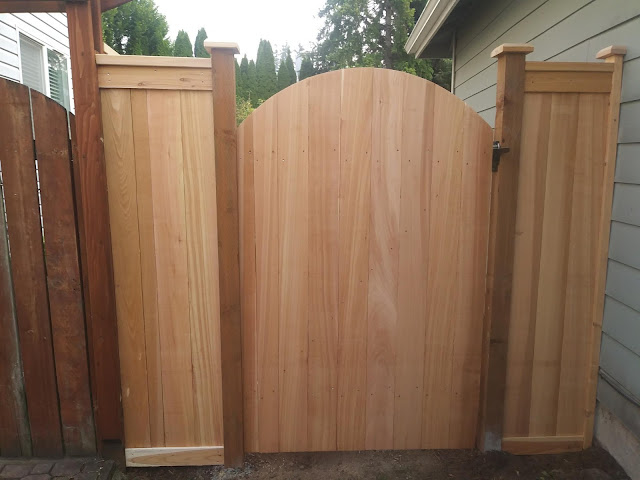 Dr Kim To Face Dino For US House 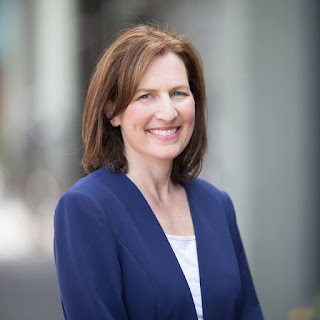 Dr Kim Schrier, an Issaquah pediatrician, will attempt to become the first ever Democrat to represent Washington's 8th Congressional District.  Shrier, who  conducted a relatively low key campaign edged out former King County prosecutor Jason Rittereiser, who touted his Ellensburg small town roots.
Schrier had volunteers door bell across the district and made phone calls.  I was impressed by the volunteer who stopped by our house not long before I filled out my ballot.  I was called earlier in the year by Schrier herself.
Schrier will face Dino Rossi, who represented the 5LD in the State Senate, but has failed 3 times to be elected to hire office.
Washington's 8th CD is the only one of 10 in this state that has never been represented by a Democrat.
Posted by Mike Barer at 7:17 AM 0 comments 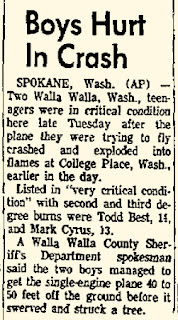 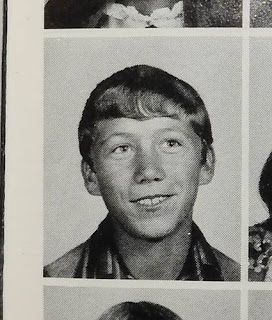 The plane theft and subsequent crash at Sea Tac was incredible, but it was not the first time that I had heard about someone with no flying experience stealing a plane.  In 8th grade, I had gotten to be friends with a boy named Todd Best.  Todd and I and a group of other friends would hang out after school or go to each other's houses.  Todd told me  of how unhappy he was at home and that he had a dad that flew airplanes.
One day in my English class, someone said that Todd was in a plane crash and nearly dead.  In the middle of the night, Todd and a friend snuck into Martin Field,  a small airport in College Place.  Apparently, thinking that he had seen enough of his father flying and perhaps, having worked controls under his supervision, he thought he could fly to California.  Todd took what I had heard was a brand new airplane and with his buddy, had started the engine and had begun to take off.  How he would navigate the plane to it's proposed destination was probably not considered.  Nor was the fact that he would probably face police and an angry father.
Apparently the plane hit a tree, crashed and burst into flames.  The two boys were rescued and were sent to the Shriner's Hospital in Spokane to recover from burns.
Todd would die from his injuries, the other boy, I would later hear, would survive.  It was the first time a schoolmate would die and it was a very devastating experience.
Posted by Mike Barer at 8:02 PM 0 comments 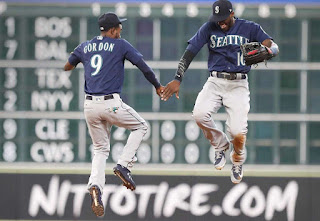 No one saw this coming, but the Seattle Mariners, not playing their best baseball the last few weeks, completed a four game sweep over the division leading Houston Astros this weekend with a 4-3 extra inning come from behind victory.
Mariner closer Edwin Diaz had recorded a close in each of the 4 games.  He is baseball's leading closer.
The series no doubt will reignite Mariner playoff talk around town

Cannon Beach's Haystack Rock crowns one of the most beautiful beaches that I've seen. 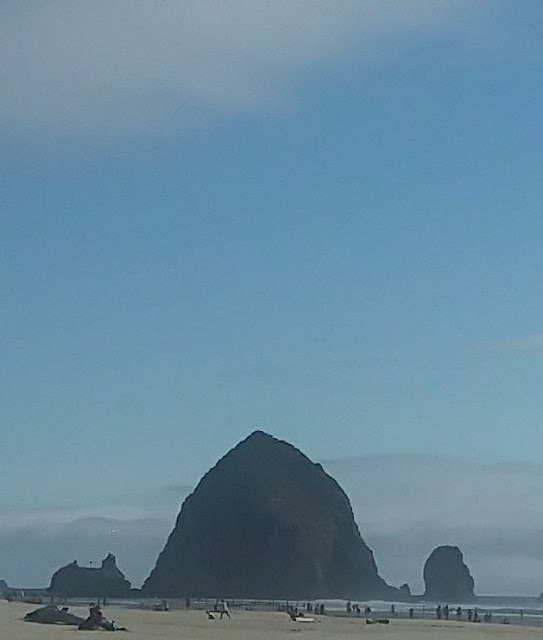 Sitting at the main court, it's fun to watch and easy to get into the games. 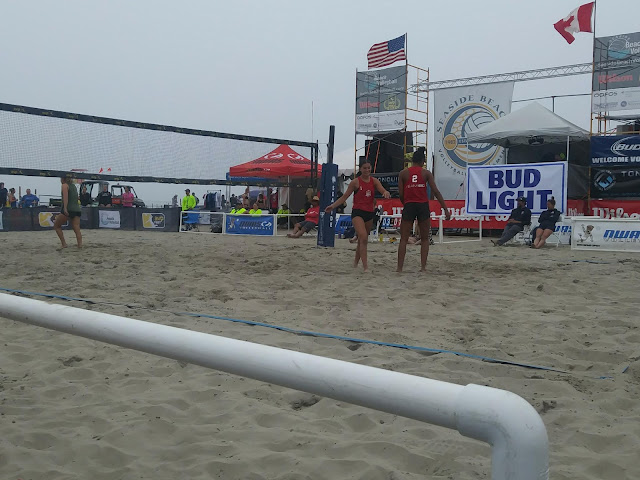 Volleyball nets as far as the eye can see. Probably one of the biggest beach volleyball tournaments around. 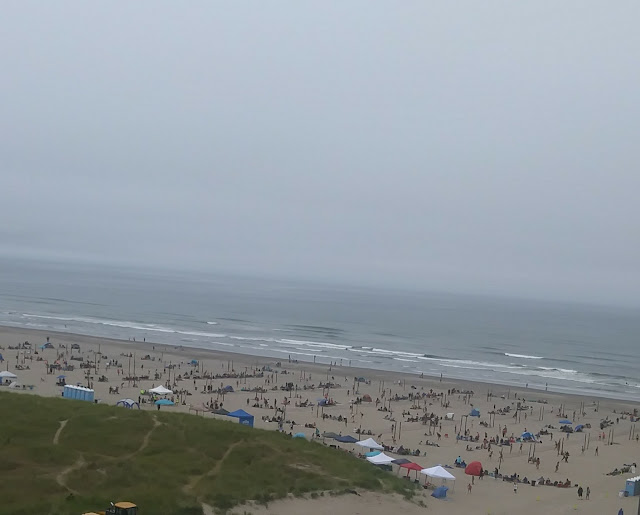 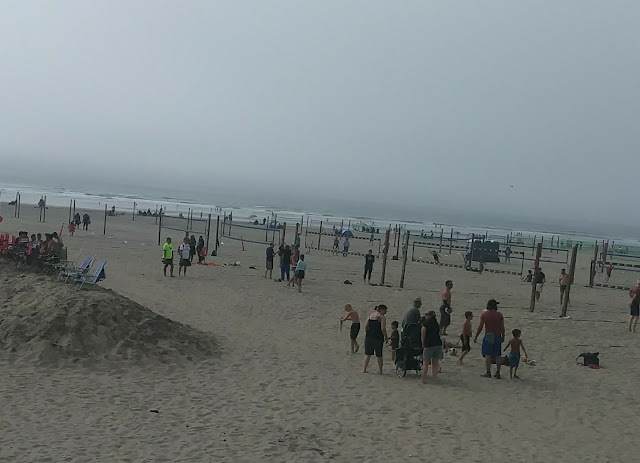 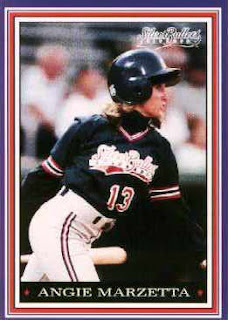 This is Angie Mazetta, better known in this area as Angie Mentink of  host of Seattle Mariner broadcasts on Root Sports.
At the time, she played woman's baseball for the Colorado Silver Bullets.  She was previously a softball stand out at the University Of Washington.
Angie started with Fox Sports Network (now Root Sports) in 1998, making this her 21st year covering Mariner's baseball.

Cal Phipps was unhurt when his U1918 Oberto Beef Jerky hydroplane flipped and landed right side up during this year's Albert Lee Appliance Cup Seafair race.
Posted by Mike Barer at 7:54 PM 0 comments

Easily old enough to be the grandfather of most of the other inductees, 82 year old Jerry Kramer ends his long wait to be inducted to his rightful place in the Pro Football Hall Of Fame.  Kramer played guard for the Green Bay Packers from 1958-1968, on a team that won 5 NFL titles.  His Packers also won the first two Super Bowls.
Posted by Mike Barer at 7:52 AM 0 comments 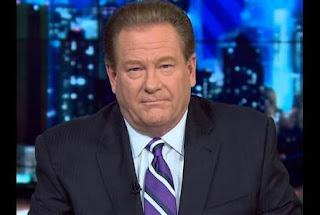 Ed Schultz, one of America's unique political commentators died early last month.  Schultz, who worked for Air America a Liberal talk radio network, for a time, is probably best known for the "Ed Show" on MSNBC, which ran from 2009 to 2015.
I got to meet him in 2008 when he keynoted the Eastside Dinner at the Golf Club At Newcastle.  Schultz was known as a Liberal who liked to hunt and for his plain spoken delivery.

The Fish Swims Away 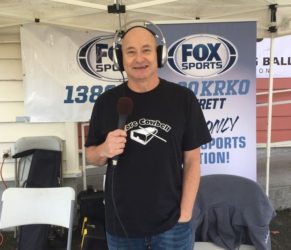 Puget Sound.media reports that Jeff Aaron, known in local sports broadcasting in the area as "The Fish", has left KRKO in Everett.   Aaron had been in radio in Everett for 16 years, but may be better known as Mitch Levy's likable sidekick on Sportsradio KJR.
On KJR, Aaron was known for his grasp of sports history, he was often referred to by his co-host as Mr. Trivia.  He left KJR and Levy with a memorable last show. He landed at KRKO in 2002.
A format change to music at KRKO  has prompted his departure.  The Everett Herald is reporting that the Fish is heading for Phoenix to continue his sports broadcasting career.

Showing that he had aged like all of us, I was watching CBS Morning News, where one of the most beloved actor of our generation, Alan Alda, revealed his diagnosis of Parkinson's Disease.

Alda showed the quick wit and upbeat attitude that viewers know when talking about his diagnognosis.