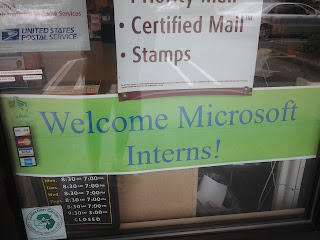 The UPS Store at 15600 NE 8th St B-1 in Bellevue can ship anything big or small.  We can pack bikes and fragile items.  We can pick up your items anywhere in the Bellevue-Redmond area.   We also do passport pictures, printing, and notary services.   Call 425-746-6880 for more information.  The UPS Store 4156 in Crossroads is your Microsoft Interns packing and shipping headquarters!
Posted by Mike Barer at 6:35 AM 0 comments

Baseball Is Sweet In Walla Walla 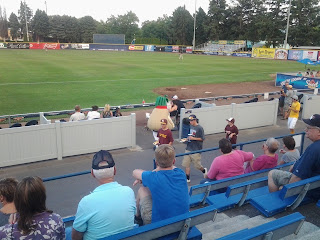 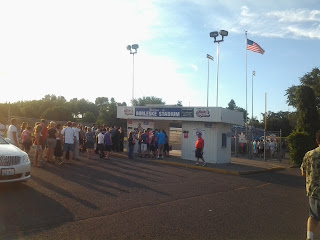 It had been years since I watched baseball in Borleske Stadium (bottom picture), but this past weekend my father and I went to Walla Walla to join my brother, Steve in attending a Walla Walla Sweets game.
The Sweets began playing in 2010, part of the West Coast League, the WCL is a summer college league with teams in Washington, Oregon, and British Columbia.  The team members are college baseball players from around the Northwest and beyond.  The Sweets team is comprised of  players from as close as Walla Walla Community College and as far away as Emery College.
I remember watching Northwest League Baseball as a child and so much has changed.  It was straight and played so seriously.  The dour faced PA announcer would announce each batter.  The Sweets games are fun and zany.  There is a big onion mascot (top picture) representing the namesake of the team (Walla Walla  Sweet Onions).  I guess the team could have had a "wine" name as the area is now known for it's wineries, but I think the sweet onion name was deemed more family friendly.  Borleske Stadium has been changed also.  The outfield fence looks well crafted, there are various food choices throughout the stadium (I think in the old days, it was hot dogs, popcorn, and peanuts).  There are box seats, available for along the field (top picture), and a beer garden along the left field fence allows the fans a chance to get the beverage of their choice while sitting away from those who choose not to drink.  The garden also pours a variety of the area's wines such as Calico Red by Bergevin-Lane.
A variety of contests include "thirsty batter", where a player on the visiting team is so designated, whenever that batter strikes out, fans will enjoy a discount on their beer.   Other contests include a run around the bases,  and a catcher's throw.  Although the crowd was rather light, it does seem like the town has taken well to the team.  I think the fact that it does not have a Major League affiliate could actually lend itself well to team building and stability.  It would seem that players would stay with the team through the entire season.
One important note is to keep your eye on the ball if you attend a game as foul balls landing in the stands is quite common.
Posted by Mike Barer at 8:22 PM 0 comments

A Weekend In Walla Walla

A small park at corner of 3rd and Main. 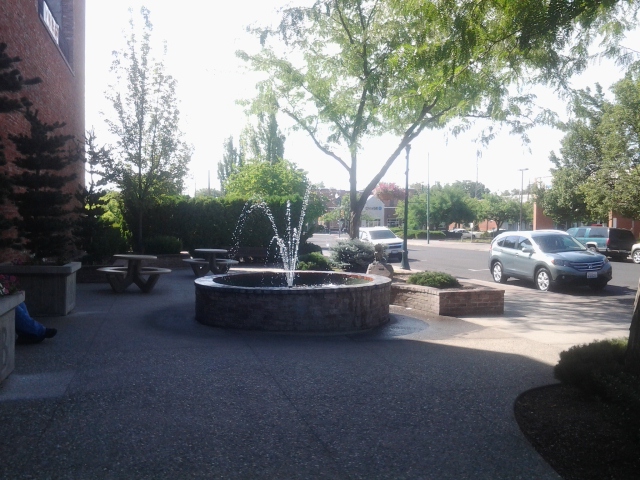 National Advertising For The Heist 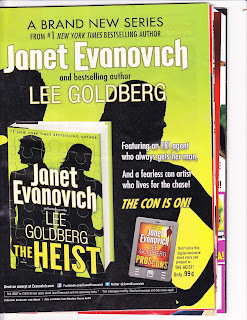 This ad for Lee Goldberg's latest novel The Heist, which he co-authored with Janet Evanovich, was found in the July 1st addition of People Magazine.  The book has been on the New York Times fiction best seller's list for well over a month.
Posted by Mike Barer at 10:58 PM 0 comments 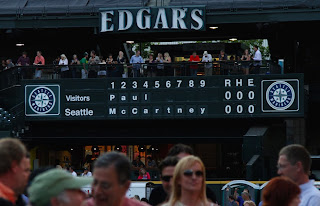 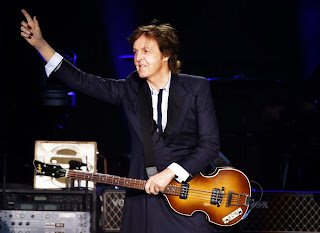 It was the concert of a lifetime.  It was a dream come true and even better, it was on my birthday.  5 years ago, Ringo Starr at St Michelle Winery, it was the first time that I had seen a Beatle live in concert, that by coincidence was also on my birthday and while Ringo was wonderful, last night's McCartney concert was off the charts.
Recently turned 71, McCartney played everything from new releases, Wings songs, Beatles song from during and after the mop top period, He did a touching version of "Blackbird" speaking of how he had written it after reading about and observing civil rights tension in the South during the 60s. He paid tribute to departed band mates John Lennon and George Harrison as well as his late wife, Linda.  His tribute to wife Nancy "My Valentine"  was beautiful and moving. He did one of my old favorite, "Live And Let Die" , a theme from the James Bond movie with the same name with special effects and fireworks.
It was the first rock concert in Safeco, which Paul recognized.  He stopped for a moment "to drink it in"  He also did a tribute to Seattle native Jimi Hendrix and keeping his Seattle theme, invited surviving Nirvana members to join him on stage to perform with him during his encore.
The top 2 pictures were taken from Seattle Times site as our cells ran out of batteries.  In addition, it was much clearer than what we would have been able to take. I scanned my ticket this morning. We were on the floor, 8 rows up to the left of the stage. 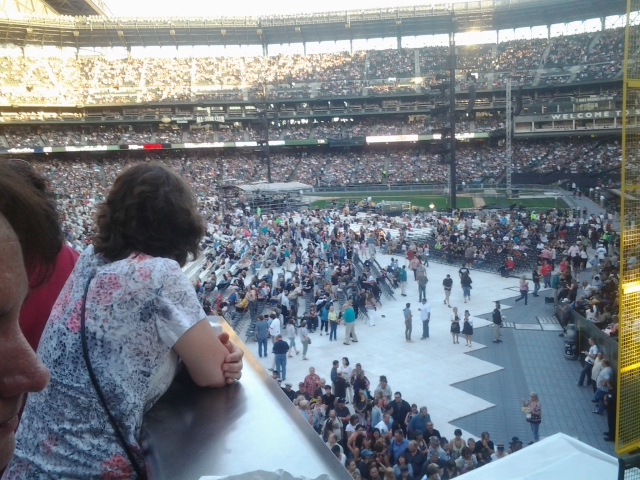 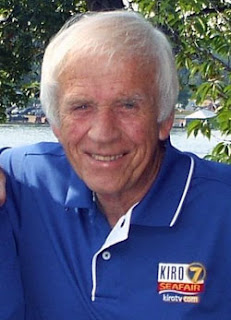 KIRO-TV has found a place for Seattle radio legend Pat O'Day on it's annual Seafair race coverage.  The station earlier this year, had announce that it was parting ways with the veteran broadcaster.  When an article by Seattle Times reporter Erik Lacitas revealed the move , the city was outraged and word was that the station was run by accountants back east and had lost touch with the community..  Bouyed by Facebook and Twitter, area residents, some who normally would not have cared about the race, expressed their outrage.
According to the SeaTac Media web site. Pat will do background and history reports during the race day.  He will also do reports on KIRO FM, which is no longer associated with the TV station of the same name.  It will no doubt be a busy Sunday for O'Day.
Posted by Mike Barer at 5:49 AM 0 comments 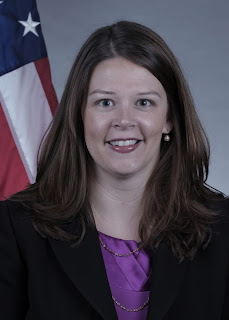 The 5th Democrats endorsed Courtney Gregoire for Seattle Port Commission.   Gregoire, the daughter of former governor Chris Gregoire, was appointed to the Port early this year when Gael Tarleton left her position after being elected to the state House Of Representatives.  Gregoire spoke to the 5th at it's meeting about her vision for the port.  Gregoire will face election this fall.
At an earlier meeting, the 5th endorsed sitting port commissioners John Creighton and Stephanie Bowman.
Posted by Mike Barer at 6:27 AM 0 comments 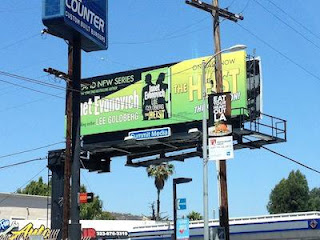 Lee Goldberg's best selling book, "The Heist" is featured  on this Sunset Blvd. billboard in Los Angeles.  Lee co-authored the book with Janet Evanovich.  The billboards along The Strip are usually for new movie and album releases.  Incidentally, I just finished the book, it was thoroughly enjoyable.
Posted by Mike Barer at 6:42 AM 0 comments

Mariners Get Broom Out Of Attic--Sweep Angels 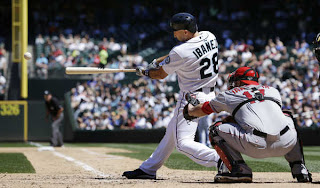 More than half way through the baseball season, the Seattle Mariners held on for it's first sweep of the 2013 season. It came at home against the loaded but underachieving LA Angels.  Michael Saunders hit a 2-run homer and Raul Ibanez (above) doubled in a run.  This lifted a "monkey" off the M's back as they have blown opportunities for sweeps several times during the season.
Posted by Mike Barer at 8:13 AM 0 comments 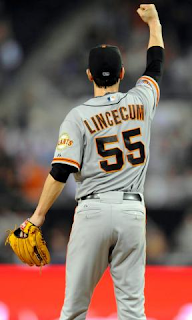 San Francisco Giant ace pitcher Tim Lincecum, a Seattle native, whose dad, Chris, comes into our store often, just pitched his first no-hitter as his team beat the San Diego Padres 9-0.  This has been a tough year for Lincecum who halfway through the season, had up to now, not gotten an out in the 8th inning in any of his starts.  Lincecum has won 2 Cy Young awards and has 2 World Series rings.

I found this lone maple leaf on the ground in Maple Valley's showcase park, Lake Wilderness.  I took the picture because the leaf is part of the city logo. 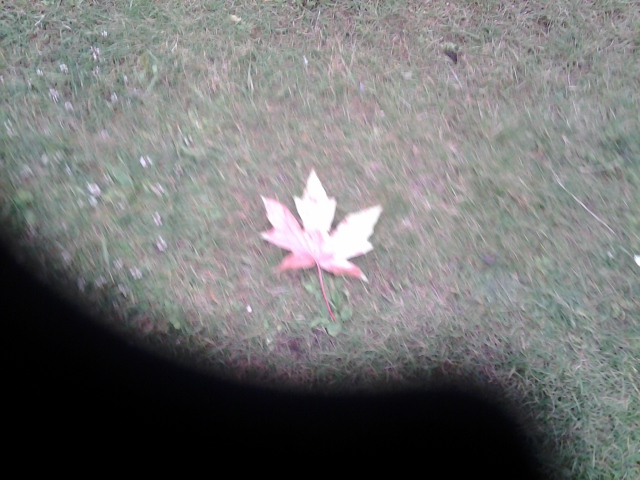 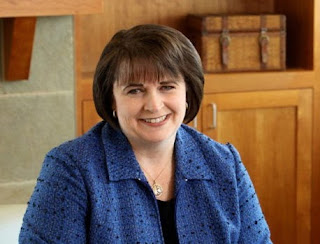 41st District State House member Marcie Maxwell announced on her facebook page today that she is resigning to take a post as senior education advisor for Governor Jay Inslee.  The Renton Democrat is known as a tireless education advocate. Most recently serving as Deputy Majority Leader for Education and Opportunity.
An Eastside real estate agent, she is also known as an active community leader.
Posted by Mike Barer at 11:10 PM 0 comments

The News At The Zoo 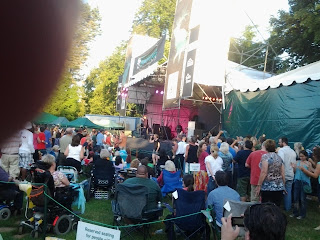 The 1980s hit makers Huey Lewis and the News played at the Woodland Park Zoo last Sunday.  Paying tribute to their most successful album "Sports", Lewis quipped it came out in 1983, before "the Internet, cell phones, cds, and my bad back". The album was second only to Michael Jackson's Thriller on the 1984 hit charts.   They did every song in order from the album, Lewis mentioned the flip side saying "yes, you had to turn the record over".  They also did a number of other hits, plus a sample from a new album that they are working on. Lewis also brought warm up act Alice Stuart up to perform with him, saying that the band once played warm up at her concerts.
The band combines Blues, 60s style do wop, a touch of gospel, along with an 80s rhythm.
A capacity crowd stood, clapped their hands, danced and sang to an inspired performance by the News.
Posted by Mike Barer at 8:03 AM 0 comments

Huey Lewis And The News are performing live at the Woodland Park Zoo in Seattle.  This year marks the 30th anniversary of their Sports album.  in this picture, they are doing "Walking On A Thin Line". 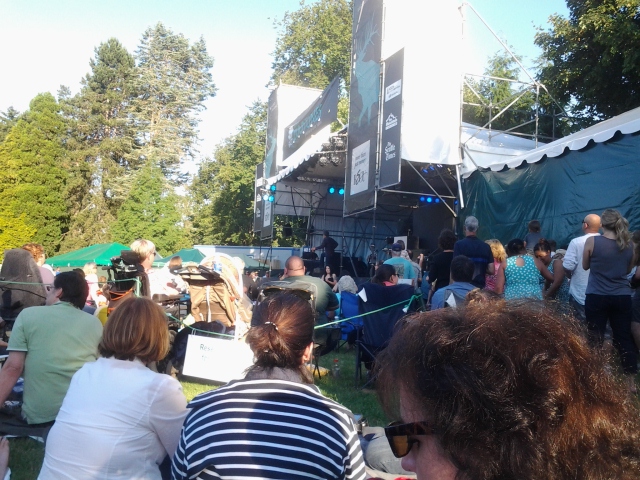 We spent the fourth Of July with family and friends in Bellevue Park to listen to music and watch the fireworks. 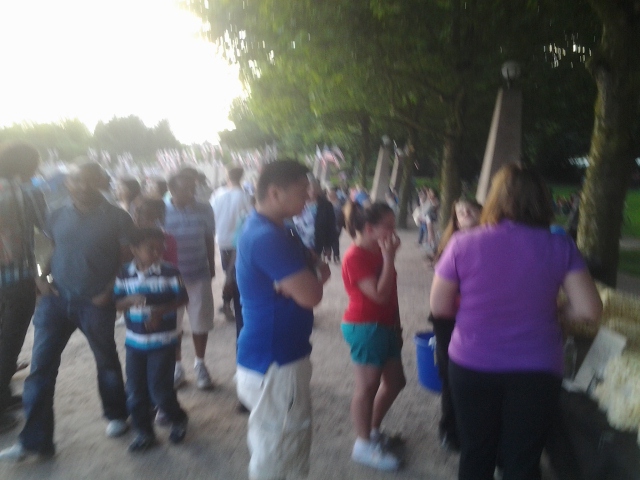 Lake Sammamish In The Morning

We have been dog sitting at our friend's house by the lake. I Snapped this picture on Saturday morning. 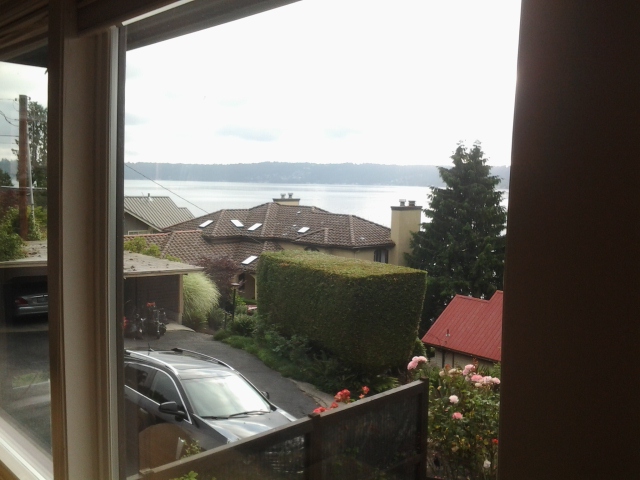 Have A Happy 4th Of July! 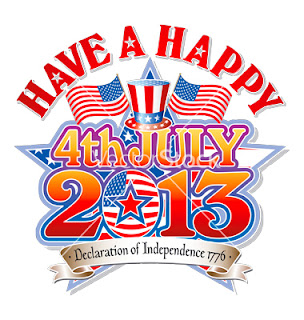 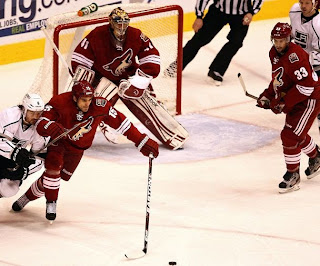 The Seattle Times reports that the Glendale City Council narrowly approved a lease that would allow the Phoenix Coyotes to remain in that city, had the vote failed, the team could have been sold and relocated to another city.  Seattle was one of cities spoken of, but after efforts to get the NBA's Sacramento Kings failed, area sports fans were a little more careful about getting hopes up.
Posted by Mike Barer at 7:44 AM 0 comments