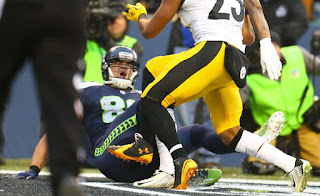 The Seahawks 39-30 win over the Pittsburgh Steelers keeps their play off hopes alive, but the injury to tight end Jimmy Graham does not make it easier.  Graham (above) will need surgery on the patellar tendon on his right leg.  Graham, who was acquired from the Saints for Seahawk center Max Unger, injured the leg diving for a pass in the end zone.
The game was played in front of a home crowd, was perhaps the most exciting of the season.  Russell Wilson, who was celebrating in 27th birthday, throw for 345 yards and a career high 5 touchdown passes.  Steeler quarterback Ben Roethlisberger threw for 456 yards, the worst air attack the Seahawks had ever suffered. 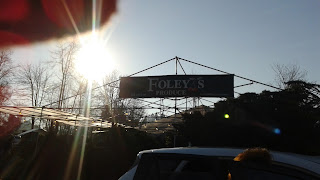 The first thing you see entering Maple Valley from the North is Foley's Produce.  The name may not be familiar, but the site would be.  We dropped by today to purchase a Christmas Tree/Hanukkah Bush.  They also have apple cider and honey.  During the summer and fall, they sell fruit and vegetables.  They currently have a full lot of trees.  They are located at 21419 SE Renton-Maple Valley Highway Maple Valley, WA 98038.
Posted by Mike Barer at 9:15 PM 1 comments

Cougar Coach Mike Leach doesn't show high regard for reporters, opponents, or his staff and for that matter, himself in this diatribe after our 45-10 defeat in the Apple Cup.  Hostility developed between Leach and reporters for his not speaking to questions about the health of the starting quarterback Luke Falk.
Falk was carted off the field in the Cougars victory over Colorado, it was not known until game time that back up quarterback Peyton Bender would play.
Posted by Mike Barer at 9:05 AM 3 comments 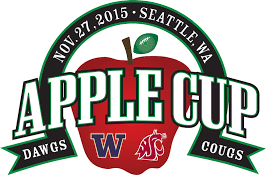 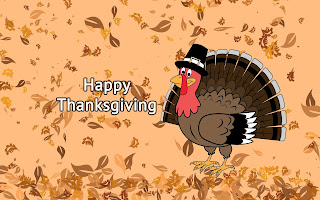 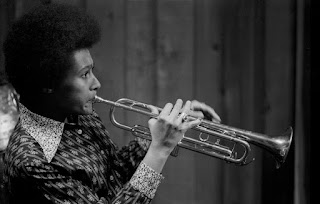 Cynthia Robinson, trumpeter and co-founder of the brassy funk band Sly And The Family Stone has died.  She is known best for her ad libs in various songs of the Stone, like telling everybody to "get up and dance with the music"  in the song of the same name.  She also added the "Hey Hey Hey" in "I Wanna Take You Higher".  The Family Stone took rock music to a new level and most likely inspired Tower Of Power, Chicago, and Steely Dan.
Robinson also played with Graham Central Station (which featured her cousin Larry Graham), George Clinton and Prince.
A native of California, Robinson was 69.

Email ThisBlogThis!Share to TwitterShare to FacebookShare to Pinterest
Labels: Cynthia Robinson, Sly And The Family Stone. 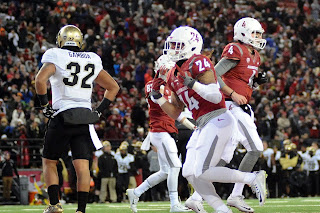 WSU is ranked by 20th in the nation by most polls according to USA Today.   It is the highest ranking for the Cougs in 10 years.  The Cougars handily defeated Colorado last Saturday.
The Seattle Times reports that WSU star quarterback Luke Falk had suffered a concussion in the game that may not be career ending or season ending. That is according to WSU Athletic Director Bill Moos.  The Cougar camp had been pretty closed mouth after the game and all of Sunday.
Has status for the Apple Cup this week is uncertain.
Posted by Mike Barer at 10:06 AM 0 comments 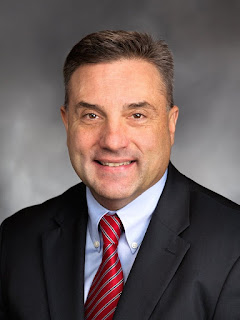 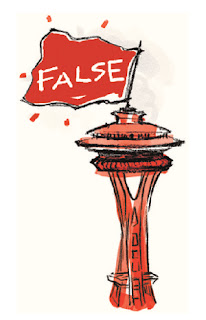 In the early days of 5th LD Rep Jay Rodne's service, he was never much of a target.  Democrats would always focus efforts toward defeating then Rep Glenn Anderson and Senator Cheryl Pflug.  Rodne was considered a moderate Republican, who would straddle the middle on most issues.
That has changed and in a big way.  A few years ago, Rodne spoke out against marriage equality.  He has taken to walking up to the Democratic booth at festivals and debating issues, in it's self, not a bad thing to do.
His latest foray has been statements criticizing the President and Governor Inslee on their stance on Syrian immigration.  After the Paris attacks, Rodne called Muslims barbarians and posted on facebook that Obama want to bring a million and a half Muslims into the country.  The Seattle Times called the statements false, using it's truth needle.
The issue of bringing in Syrian refugees is indeed a sensitive issue, but before choosing sides, Rodne should get his facts straight and after that, articulate an opinion.
Jay's district encompasses  North Bend, Issaquah, Carnation, and Maple Valley.
Posted by Mike Barer at 7:48 AM 0 comments 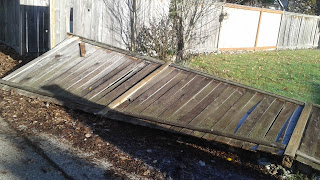 In the aftermath of last Tuesday's storm.  One of our Belmont Woods neighbors suffered damage to their fence. So far, I have not heard of a name for this one, but I'm happy that no damage was detected to our property.
Posted by Mike Barer at 12:03 PM 0 comments

Ken Levine celebrated 10 years of blogging by inviting all of his readers to an actually party in LA.  To invite people you really haven't met is quite a leap of faith, but according to his post, it was a success.   The blog, which publishes daily, was recognized one year in Time Magazine as one of the best in the country.  You can read the post and see pictures here.
Posted by Mike Barer at 8:48 AM 0 comments

Turn On The Lights! Lights? 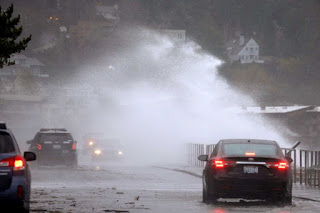 A huge storm hit the region yesterday, bringing heavy rain and wind.  We returned home last night happy to see our power was on, then in the middle of dinner, the power suddenly went out.  Luckily it was only for a half hour or so.
Posted by Mike Barer at 5:51 AM 4 comments 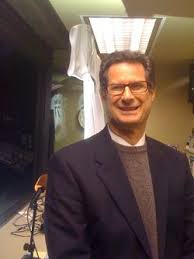 I read Ken Levine's blog because it is funny and updated every day.  Ken is hosting a party in LA tonight for all of his blog readers to celebrate 10 years of blogging.  Who knows if 3 or 300 will show up.  If I lived in LA or had enough notice, I would attend. However, I here in windy, rainy, Seattle, so I'll have to read the post on his blog or look on youtube.
Posted by Mike Barer at 3:18 PM 0 comments

Most people know that I'm a die hard Democrat, but I remember a Republican that is worth noting.   1968, Art Fletcher ran for Washington Lt Governor against the Democratic incumbent John  Cherberg,  narrowly losing.  He was the first African American to run for statewide office, and to this day, the closest to winning. At one time, a Pasco City Councilman, he would be eventually tapped to be assistant Secretary of Labor by the Nixon Administration.  He later was assistant ambassador to the UN. .
Fletcher would go on to serve in subsequent Republican presidential administrations.  He was a political ally of three term Washington governor Dan Evans.  He is noted as the "Father of Affirmative Action" and is credited for coining the slogan of the United Negro College Fund, "a mind is a terrible thing to waste".  Fletcher died in 2005.
Posted by Mike Barer at 9:07 PM 0 comments

I turned my DVR to SNL this morning to see what satire they would perform on the opening.  Instead, they did this beautiful tribute to Paris, which suffered it's own 9/11 last Friday. 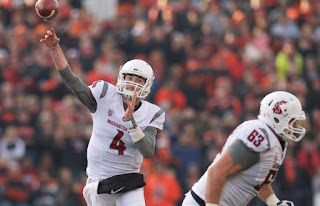 After losing the lead late in the 4th quarter, WSU quarterback Luke Falk engineered a 75 yard drive ending in a completion to Gabe Marks in the end zone for a 31-27 victory on UCLA.  It was the Cougars first victory over a ranked team since 2013. The Cougs are now 7-3 and a bowl bid is almost a certainty.
Posted by Mike Barer at 12:59 AM 0 comments 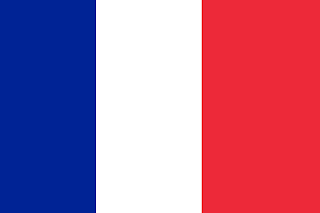 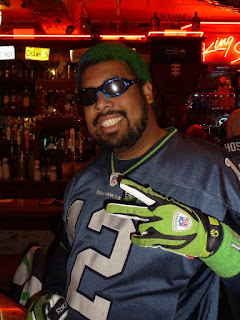 For the last few years, on the Mitch Levy program on 950 KJR, there has been a voice known as "Slickhawk".  He is Matt Mikolas and is technical director for the show.  From his outfit and effects, it looks like a well deserved nickname.  This picture curtesy of the NASORB blog. 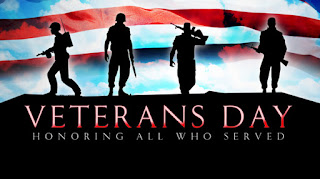 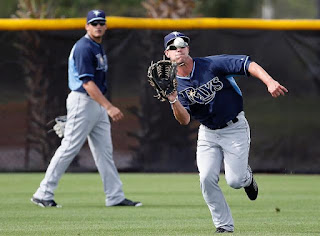 Last week, the Mariners traded Danny Farquar, Brad Miller, and Logan Morrison to the Tampa Bay Rays for 3 of their players,including one with a name familiar to boomers.  Boog Powell was an outfielder in the Ray's organization, who may be playing in the bigs for the M's in 2016.
In the 1960s and 70, there was a clean up batter for the Baltimore Orioles named John Powell, better known as Boog Powell.  This Boog Powell is no relation to that Boog Powell, but received his nickname in honor of the former Oriole.  Our Boog's real name is Herschel Mack Powell IV.
Posted by Mike Barer at 8:25 AM 1 comments

Where Is The Joke? Trump On SNL

Was it a put down or praise? Donald Trump appearence on SNL mostly a miss.
Posted by Mike Barer at 11:02 AM 0 comments

It won't guarantee an appearance in a bowl game, but the Washington State Cougars became bowl eligible by beating the Arizona State Sun Devils 38-24.  Quarterback Luke Falk threw for 497 yards and 5 touchdown passes to assure the win.
Posted by Mike Barer at 9:00 PM 0 comments 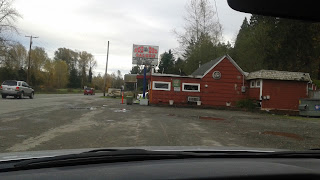 The first sign of entering Maple Valley coming from Seattle, Bellevue and all points north is the Red Dog Saloon.  The bar, which usually had dozens of motorcyles parked in front has been closed for weeks.  The reader board in front says that a reopening is planned but does not disclose when that will take place.
Posted by Mike Barer at 5:26 PM 0 comments 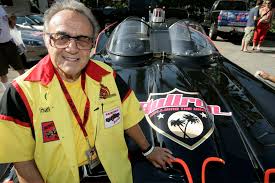 George Barris, known as the "king of car kustomizers" has died.  Barris is credited to designing some of the cars that were seen TV during the 1960s and beyond.  He developed the car for The Munsters. which was supposed to be a trick out hearse.
He is most famously credited for the design of the Batmobile, which was designed from a 1955 Lincoln Futura.  The car ran on two atomic batteries and was slowed by parachutes.  Barris was born in Chicago and raised in California. He was 89. 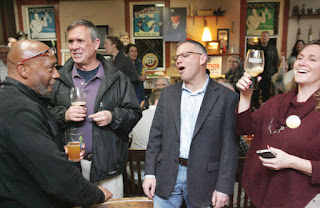 In this picture in the Issaquah Press, I (second from left) can be seen celebrating at the victory party for city council candidates in that town.  The party was held at the Issaquah Brewhouse and included candidates Bill Ramos, Paul Winterstein, and Jennifer Sutton.  Also in attendance were Issaquah Mayor Fred Butler, former Issaquah Mayor Ava Frissinger, Councilman Tola Marts, and 2014 legislative candidate Essie Hicks.
Posted by Mike Barer at 9:19 AM 0 comments

How Will They Deal With Russia and China? - Obama Mocks GOP Candidates -... 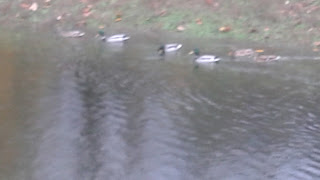 2015 has been a dry year.  It has been a while since the storm water run off pond in the Belmont Woods sub division in Maple Valley has been full, but Sunday's rain filled it and allowed three duck couples to take a leisurely swim.
Posted by Mike Barer at 8:25 PM 0 comments 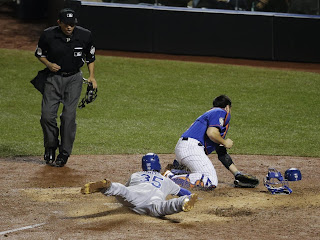 The Kansas City Royal overcame a 2-0 deficit  to force game 5 of the 2015 World Series into extra innings and an eventual 7-2 victory. That gives KC it's first championship since 1985.  2015 Hutch award winner Alex Gordon was on the winning team.

The Mamas & The Papas - Monday Monday 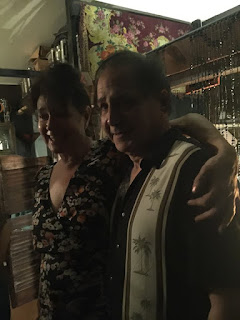 Burl Barer poses with Sean Young, I believe that Burl met Sean, when she was a guest on Outlaw Radio, the internet radio program that Burl does weekly in the LA area.
Posted by Mike Barer at 10:22 AM 1 comments