Thank you to my brother Steve for this feature on Walla Walla's Drew Bledsoe. After a stellar pro career, Drew is excelling in another field, Wine making. His tasting room is in Downtown Walla Walla.
Posted by Mike Barer at 7:28 AM 0 comments 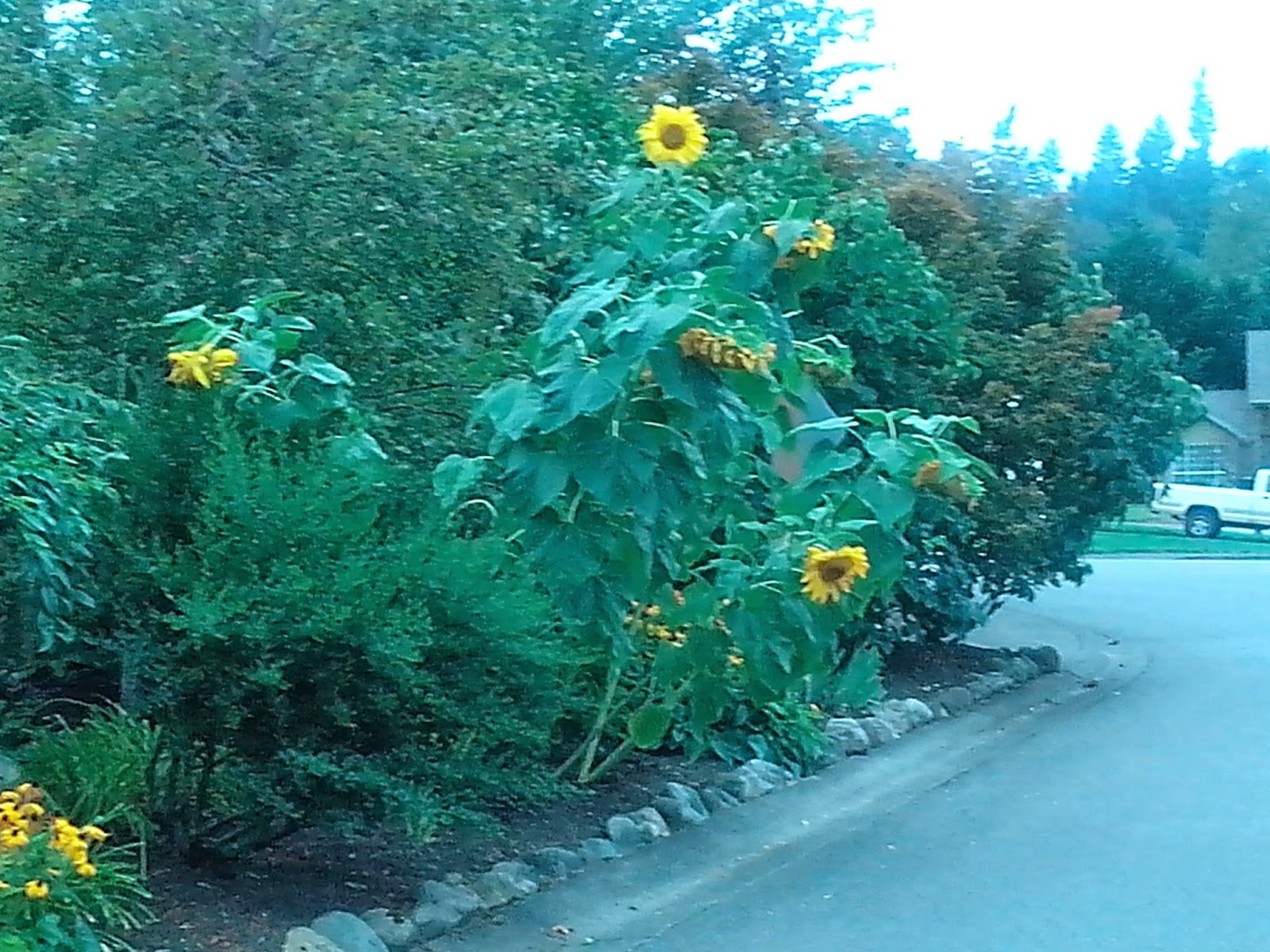 This beautiful strip of Sunflowers grown by our Belmont Woods neighbor in our cul du sac was a lovely greeting when we returned from work everyday this summer.  They are now gone for the fall season, but look forward to their return.
Posted by Mike Barer at 7:02 AM 1 comments

Wait Til Next Year For M's 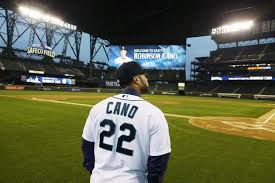 The Mariners ended this season the same way it started, a three game sweep over the Los Angeles Angels of Anaheim (can you believe the name?)  The Angels of course, got it together and ran away with the AL West.  The real LA team (they actually play in Los Angeles) the Dodgers are also playoff bound,  likewise, the two Bay area teams, the Giants and the A's.  It makes it a possibility that that the World Series may have 2 California teams, some "World" series.
This year's Cinderella story is the Kansas City Royals, which by coincidence, used to have the A's.  A couple of years after the A's left, KC got the Royals through expansion.  The Royals have not been to any post season since 1985, the longest draught in all of sports.  Pittsburgh and Detroit, both teams who have seen their share of lean times, round out the field.
The Mariners will not be in the playoffs this year, however, they do finish the season with a winning record, 4 straight wins, and were in the hunt until the last day of the season.  That's quite a change from years past, when the Houston Astros were the only thing keeping the M's out of last place.
I accidently left out the Orioles, who are returning after a long absense and the Washington Nationals, DC's third attempt at Major League Baseball (Minnesota Twins and Texas Rangers both began as the Washington Senators),  Rounding up the field are the St.Louis Cardinals, who are second only to the Yankees in World Series titles. 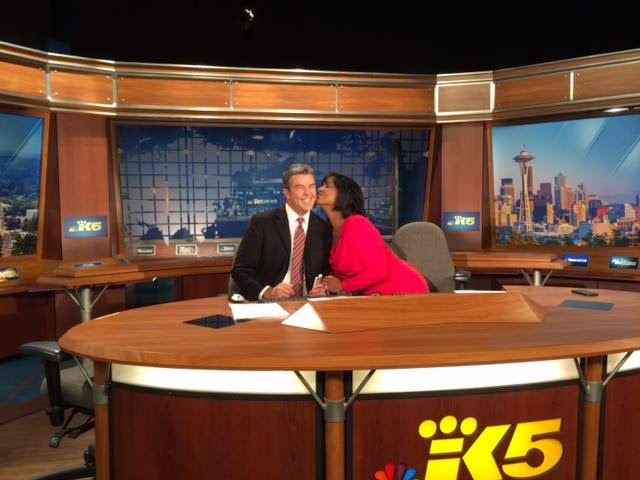 Joyce Taylor welcomes new co-anchor Greg Copeland with a kiss on the cheek as KING 5 TV starts it's new 4pm newscast.  Taylor continues to co-anchor the morning news on KING. Thank you to Seatac Media blog for this.
Posted by Mike Barer at 8:45 AM 2 comments 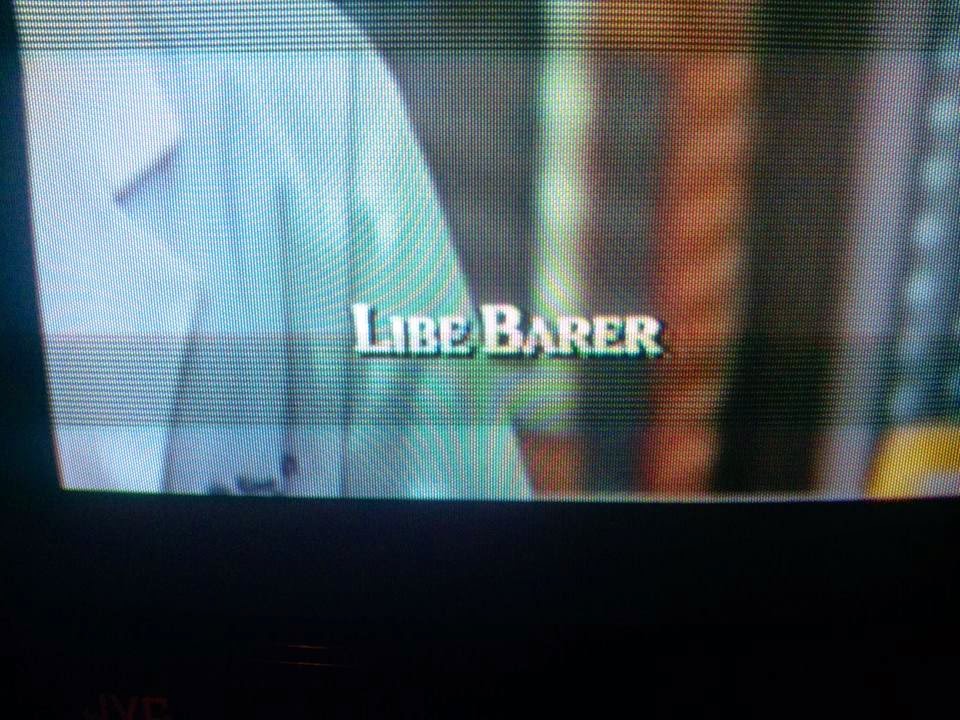 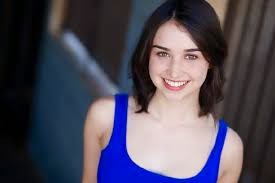 Is there a Hollywood actor in our family?  One of the members of the "Barer" group on facebook noticed a Libe Barer in the opening credits of Grey's Anotomy.  Ms Barer played a young lady who was facing brain surgery.  By coincidence, yesterday, I discussing with Cousin Stan the origins of the Barer name and whether all Barers are related. There is very little info about this lady, however she does have a facebook page.  It is interesting that she did not adapt a stage name. She has appeared in a number of shows that I have not heard of and has appeared on "Parenthood".
Posted by Mike Barer at 7:57 PM 0 comments

Thanks to reader's like you, this blog finished 15th out of 62 entrants in the category of "Best Neighborhood Blog" in KING 5's Best Of Western Washington.  This year once again, you can vote us the best at this site.  Thank you again! 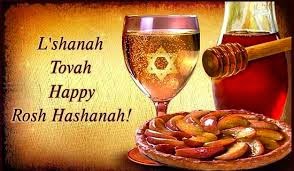 Happy 85th To My Father! 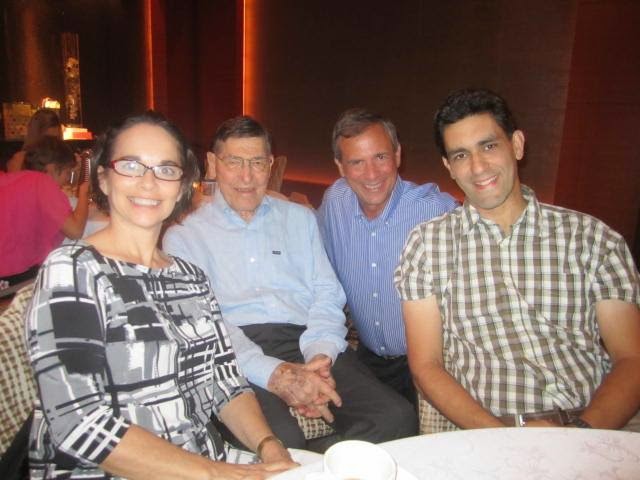 Last Friday, we celebrated my father's 85th birthday with a party at the Bellevue Club.  His birthday is actually this Friday.  Pictured above is my Dad and me in the back with my brother Steve on the right and his wife Dawn on the left.
Posted by Mike Barer at 9:13 PM 0 comments

Saturday Night In The Center 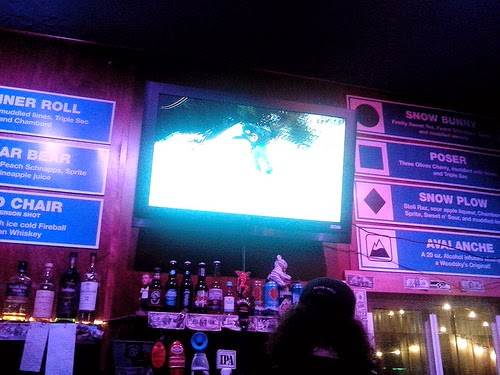 We spent Saturday night in the Fremont district of Seattle, known locally as the Center Of The Universe.  We kicked off the evening with our friends Margie and Rick at the George And The Dragon, a well known British style pub.  We had dinner, watched a quarter of the WSU vs Oregon game and then wondered across the street to Woodsky's, a local ski themed bar which premiered a documentary snow boarding movie called Tortoise, featuring our Marjie and Rick's son Eythan.  You can see (barely) Eythan performing in the picture above.
Posted by Mike Barer at 10:26 AM 0 comments

Email ThisBlogThis!Share to TwitterShare to FacebookShare to Pinterest
Labels: Eythan Frost, Fremont, The George And The Dragon, Tortoise, Woodsky's

Barking For The Seahawks 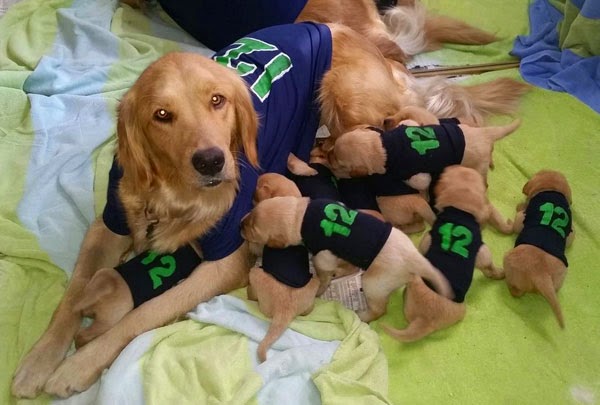 Seahawks fan's hearts were warmed with the picture of a Golden and her litter of puppies wearing the 12  fan jersey.  The picture has gone viral.  The Seahawks play the Denver Broncos in a rematch of the Super Bowl this afternoon.
Posted by Mike Barer at 10:04 AM 0 comments

Cool Things We Ship At The UPS Store In Crossroads 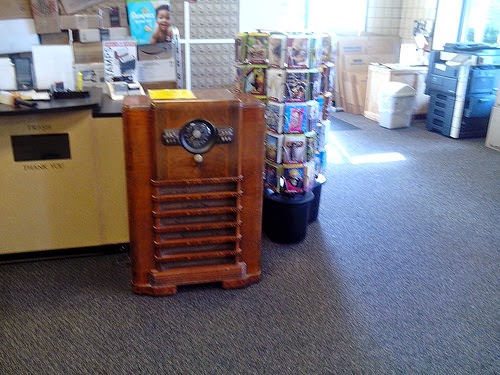 This antique radio is in mint condition, like the day it was first purchased.  Our mission is to pack it and ship it back East.  More to come.
Posted by Mike Barer at 9:24 AM 0 comments 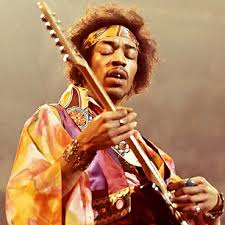 Seattle music icon Jimi Hendrix died September 18th, 1970 of an overdose of sleeping pills.  He is buried in Renton.
Posted by Mike Barer at 7:40 AM 0 comments

Bob Robertson interview with Keith Jackson  One of the greatest voices to come out of Washington State University, and a true broadcast legend--Mr College Football, Keith Jackson
Posted by Mike Barer at 10:28 PM 0 comments 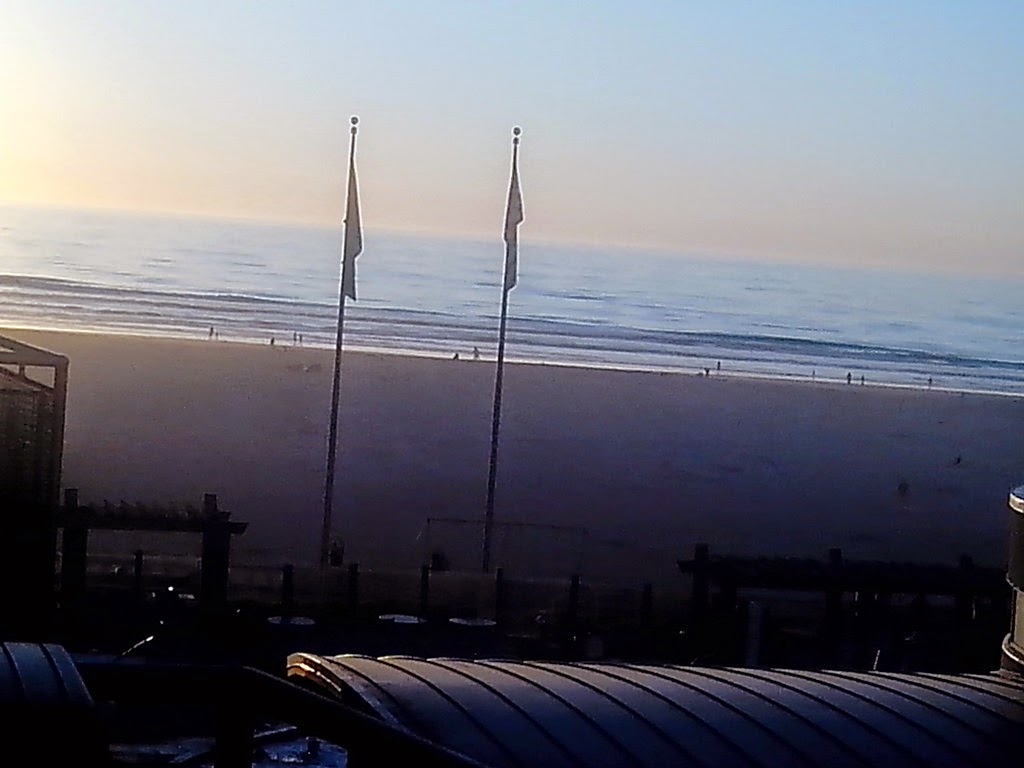 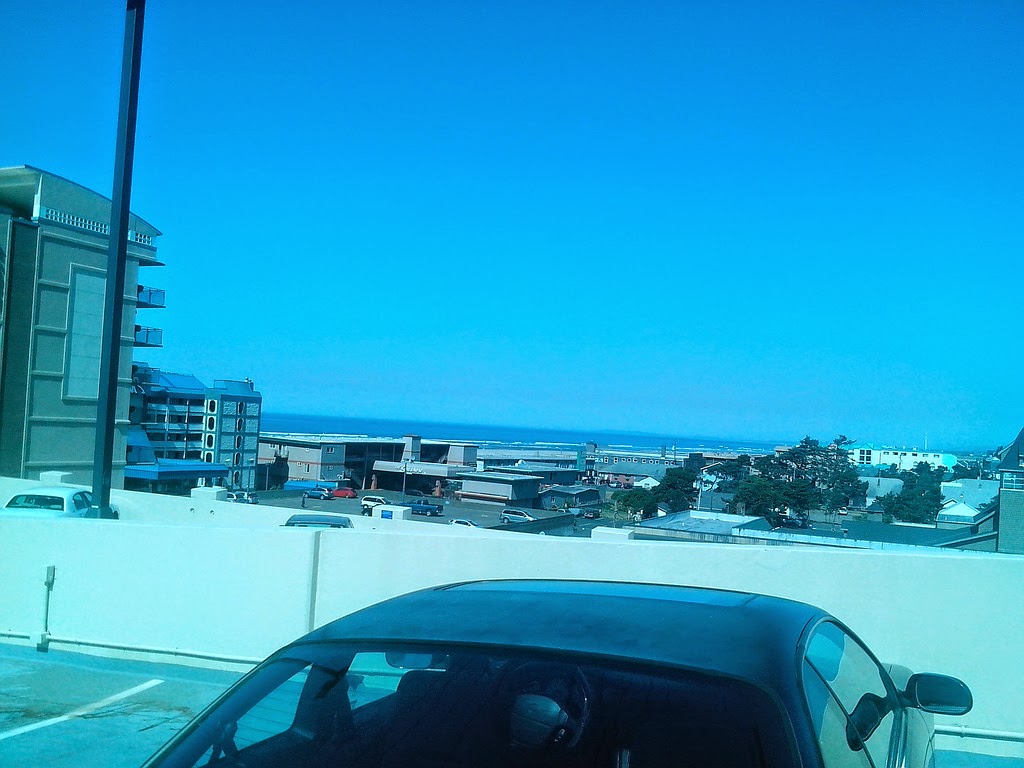 Deb and I have just returned from a wonderful weekend in Seaside Oregon. Deb's Mom was with us as we had a relaxing time walking the beaches of Gearheart, Seaside, and Cannon Beach.  Seaside, of course was a family tradition growing up, one that was easily passed on to Deb's family.  We stayed at Worldmark resort at the famous turnaround, where these pictures were taken.
Posted by Mike Barer at 10:18 PM 0 comments 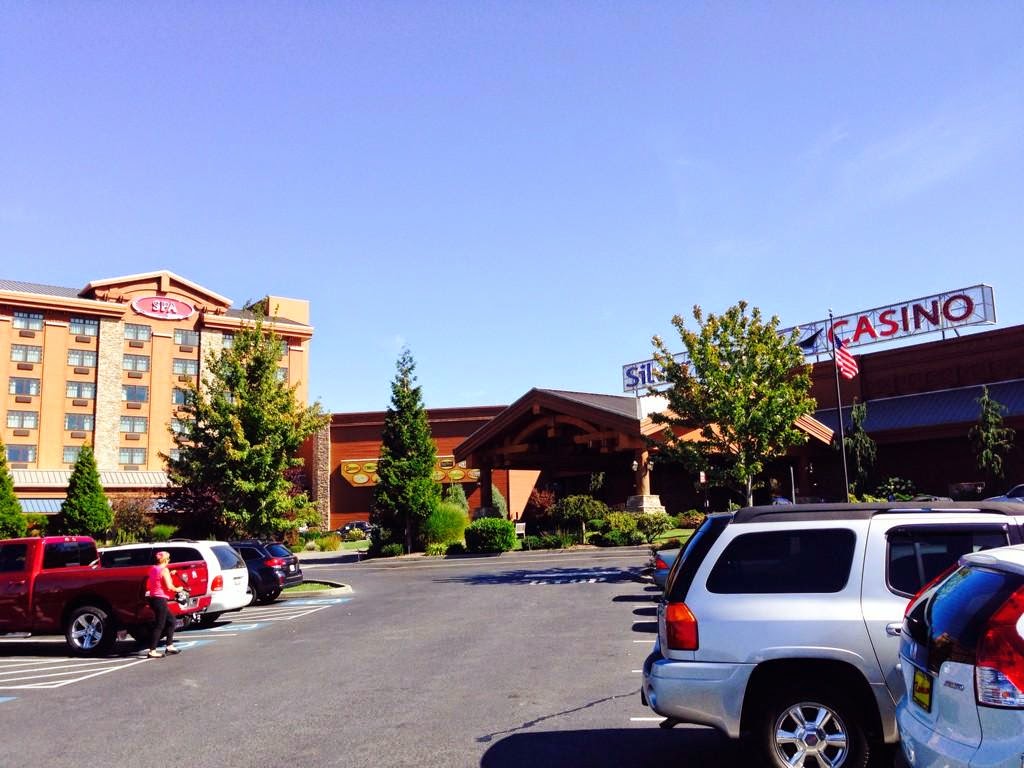 A caucus of Democratic Party leaders of the 8th Congressional district have nominated Jason Ritchie  to challenge sitting Republican congressman Dave Reichert.  Ritchie is an Issaquah based small business owner.
Democrats from throughout the state met this last weekend at the Silver Reef Casino (above) in Ferndale for the fall State Committee meeting. 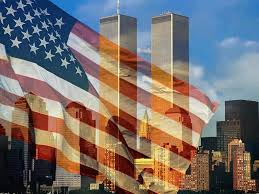 The audio is not very clean, but my Grandfather Barer's sister Sophie Barer Healey, tells the stirring tail of the family's escape from Russia.  Thank you to Burl Barer for posting this.
Posted by Mike Barer at 7:59 AM 0 comments 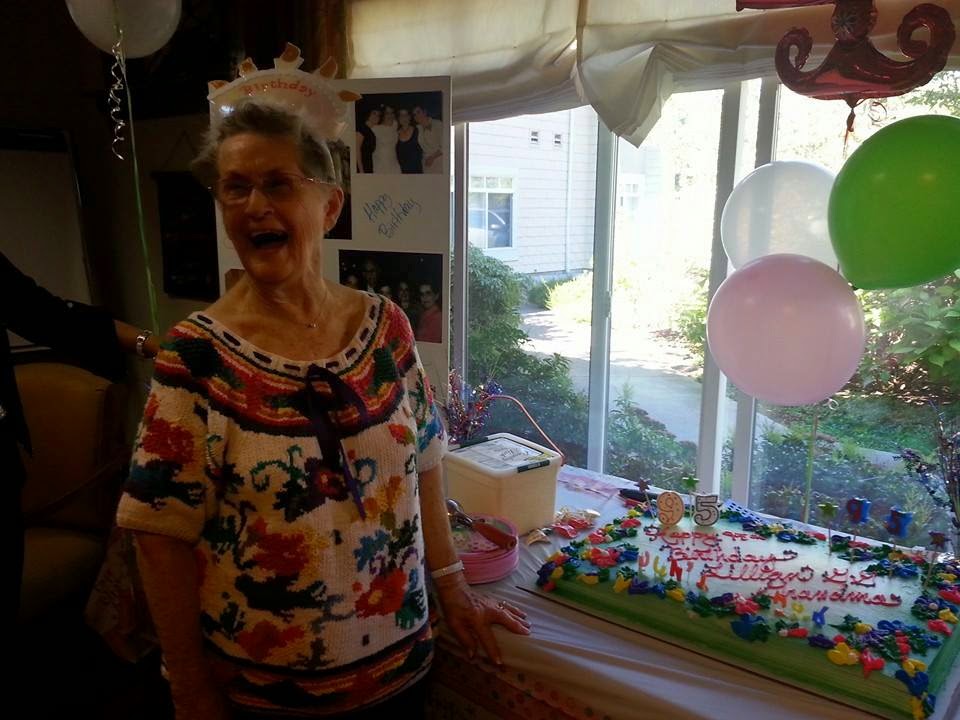 We surprised Debra's grandma, Lillian Eldridge, yesterday with a party at her assisted living facillity in Bellevue.  A crowd of family and friends enjoyed cake, punch, and live music. 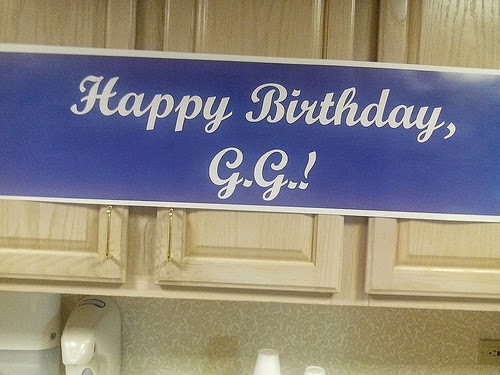 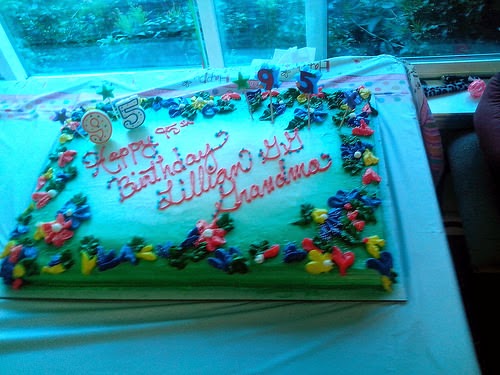 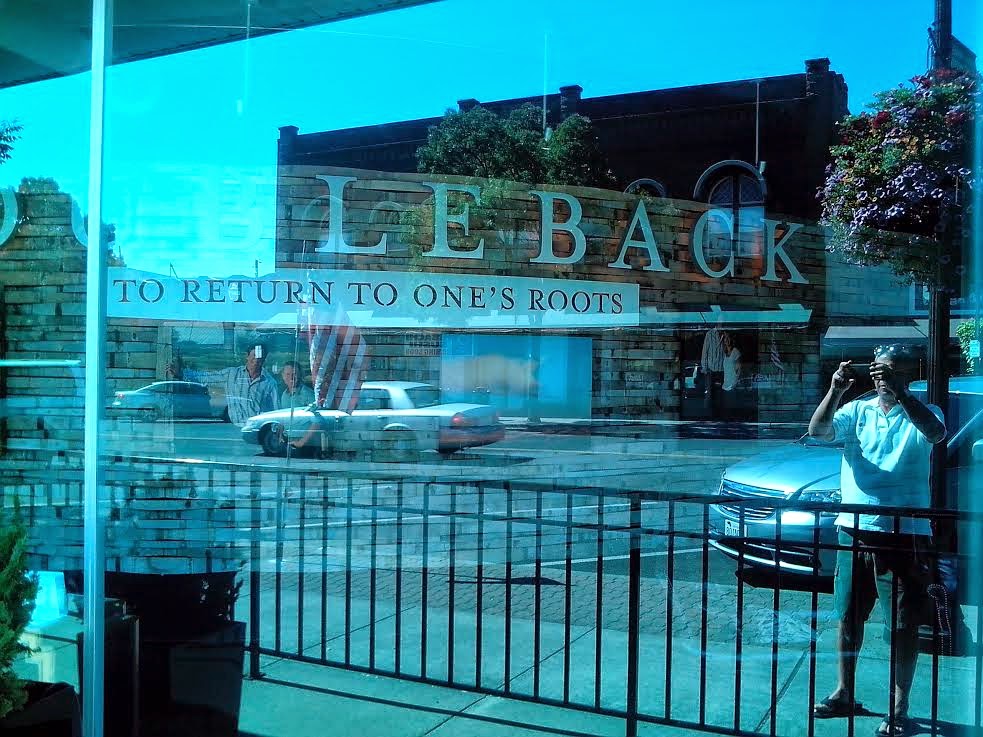 The tasting room for Doubleback Winery,has a very unusual design.  All of the signage is inside the store, visable through the picture window.  Doubleback is the brand created by retired NFL quarterback Drew Bledsoe, arguably the best athlete to come out of the region.  Bledsoe is a graduate of Walla Walla High School and Washington State University.  He helped transform the New England Patriots from one of the worst organization in professional sports into one of the best.  He is a member of the Patriots Hall Of Fame.
The tasting room is available by appointment only.  It is located at the 3 way intersection of Palouse, Boyer, and Main in Downtown Walla Walla. 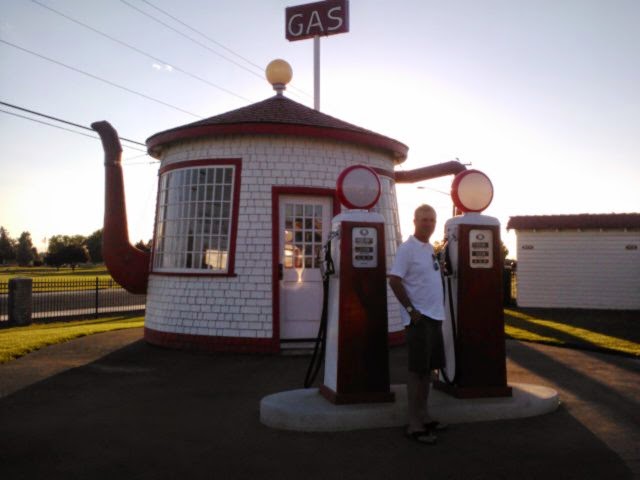 The Teapot gas station was built to commemorate the Teapot Dome scandal that rocked the presidency of Warren G  Harding.  Until not long ago, it was visable from I-82 between Yakima and the Tri Cities.  It was recently moved to the city of Zillah, not far from the previous location.  The original location was right off  Highway 12.  It is no longer visable from the freeway, but we stopped by to show our friends.

The world champion Seattle Seahawks got the honor of kicking off the 2014 NFL season last night, doing it in style with a 36-16 victory over the Green Bay Packers.  With a crowd so raucous that radio listens could barely hear the announcers (I listened to the 1st quarter and most of the second on the local radio station),  Green Bay was forced to use up their allotted 3 time outs early in the first half.
Seahawk NFL Hall Of Fame members Walter Jones, Cortez Kennedy, and Steve Largent raised the 12 Flag in the games opening ceremonies.
Posted by Mike Barer at 7:07 AM 0 comments 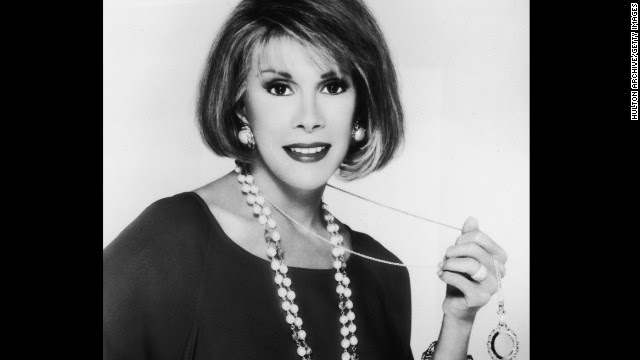 Entertainment legend Joan Rivers died today.  She had been hospitalized after suffering a heart attack during a medical procedure. Rivers was 81.
Posted by Mike Barer at 2:11 PM 0 comments 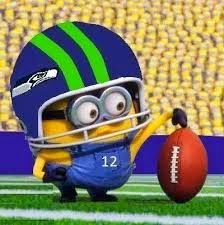 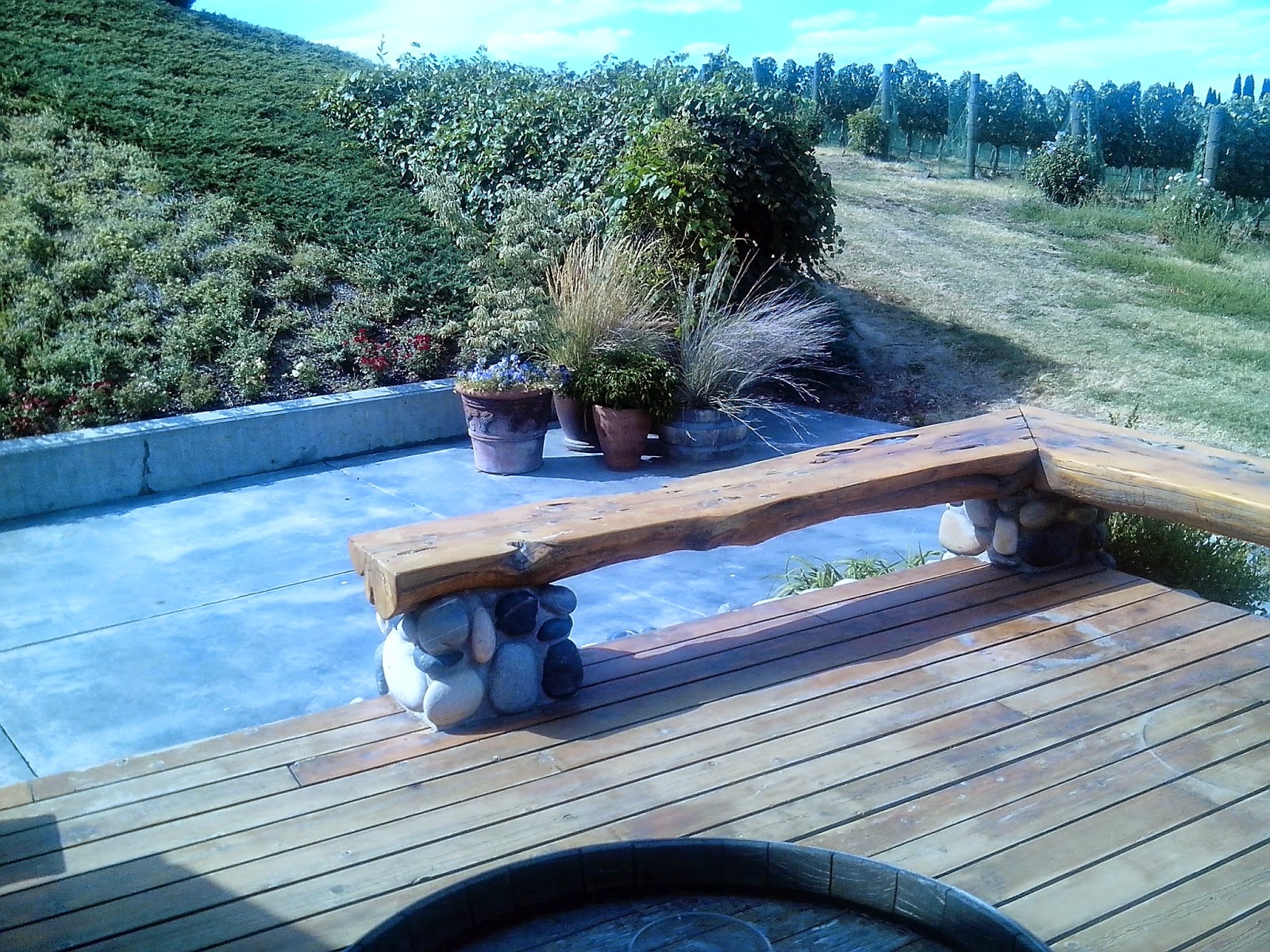 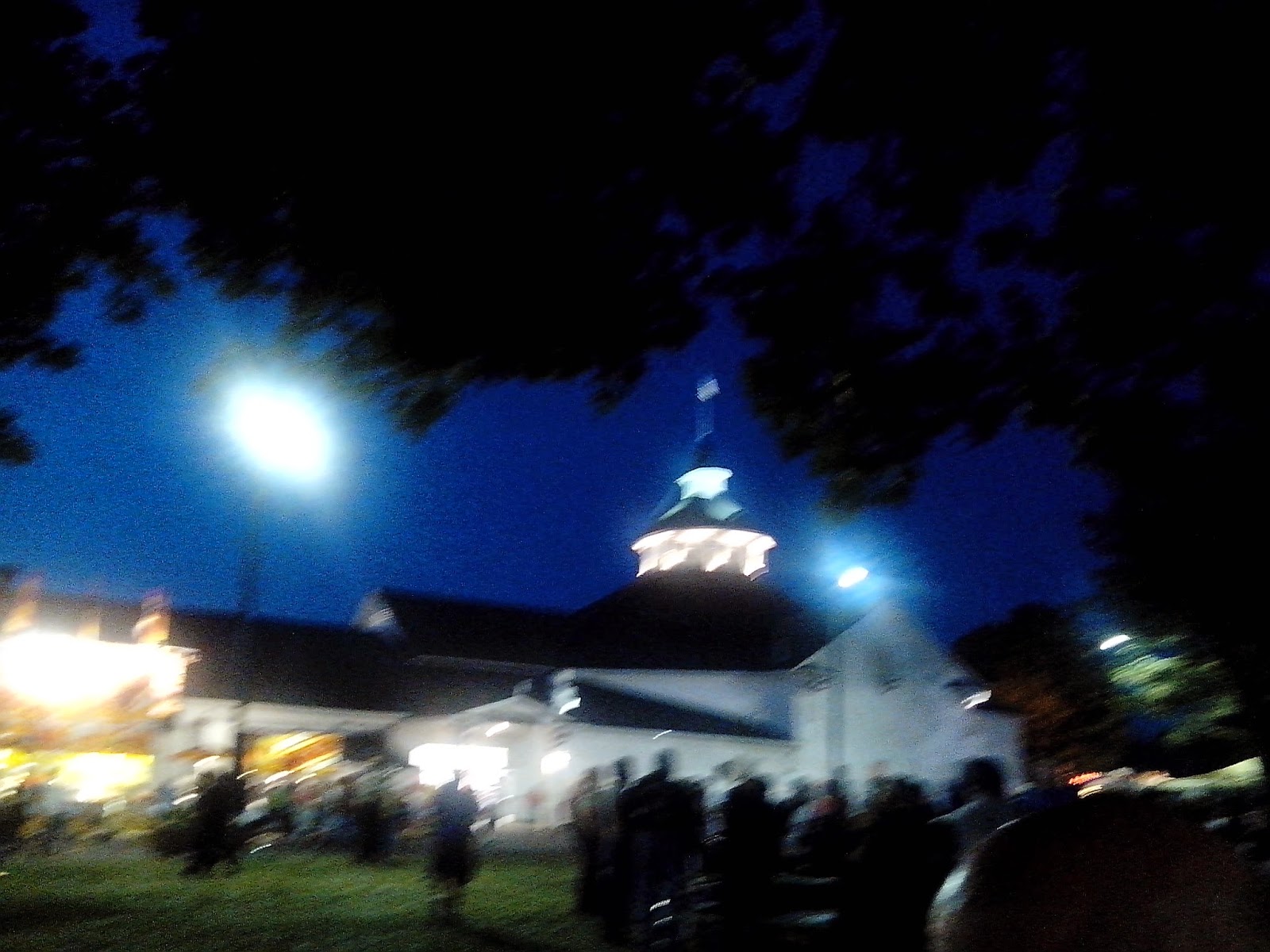 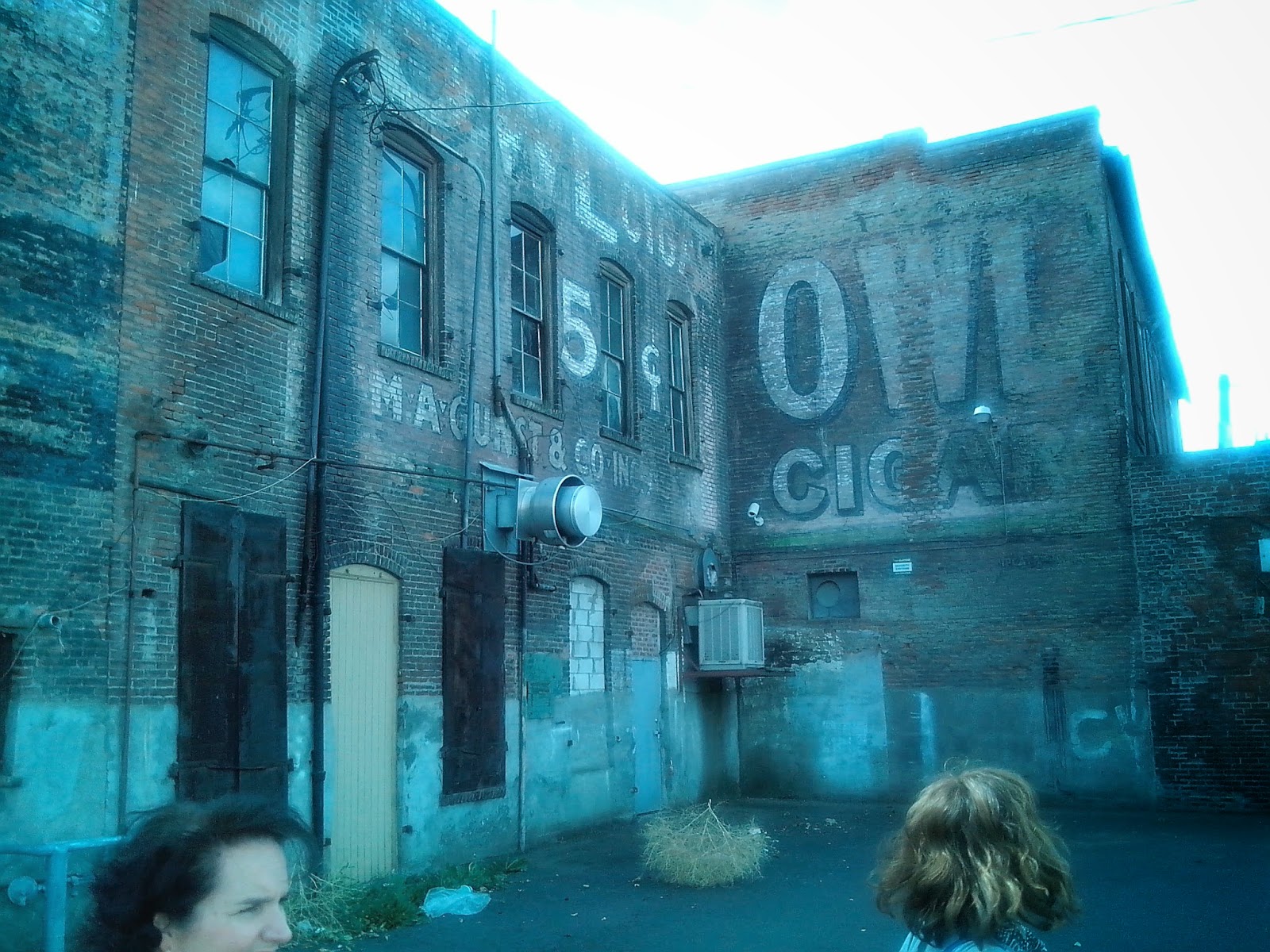 We went back to my hometown, Walla Walla this last weekend.  We brought our friends Marjie and Rick,who wanted to check out wineries.  Sunday, we rented a limo from Black Tie Limos, a local company.  That way, we got a tour of the area and did not have to drive while sipping.  We went to North Star, Gifford Hirlinger, Zerba Cellars (pictured above), and Forgeron Cellars.  On Monday,  before we left, we picked a designated driver and visited Dunham Cellars, and Three River Winery.
Good places that we visited were The Coffee Connection (formerly the Red Apple) and the Fair (middle picture).   The bottom picture in the parking lot of what is known around town as the "Barer Building" , owned by my dad until a few years ago.  It is at 4th and Main.
Posted by Mike Barer at 8:28 AM 0 comments