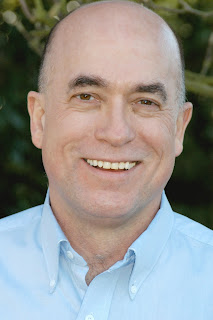 Washington State Democratic Chair Dwight Pelz has announced that he will be stepping down at the next Central Committee meeting in February.  Pelz has held the position since 2006.  Perhaps his most towering accomplishment was his role in the upset victory of Jay Inslee over Attorney General Rob McKenna for Governor of Washington.  Although McKenna was thought of as a main stream Republican, Pelz sought to portray him as a Tea Party crony of Karl Rove, the Republican hatchet man.
A strong Liberal, who is a former roommate to notorious radical Jeff "The Dude" Dowd, to whom the picture "The Big Lebowski was based on, was able to bring together many divergent wings of the party as chair.  When many Eastern Washington Democrats spoke out about running on a platform on gun restrictions, Pelz made sure their voice was heard.   He was also a kind man who always had time to chat with the rank and file.  The Democratic Party did not lose a major state or national election during his tenure.
Posted by Mike Barer at 8:39 PM 0 comments 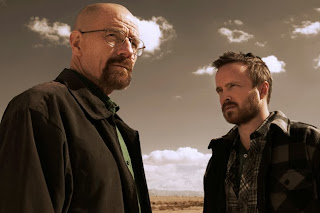 Congratulations to Breaking Bad for winning an Emmy for Outstanding Drama, the extremely popular show on AMC wound up this week.  Of course Aaron Paul, one of the stars is married to the daughter (Lauren Parsekian) of Wa-Hi (Walla Walla High School) Graduate Debra Parsekian,  Lauren is the founder of the Kind Campaign, an organization dedicated to stop girl on girl bullying
Posted by Mike Barer at 7:55 PM 0 comments 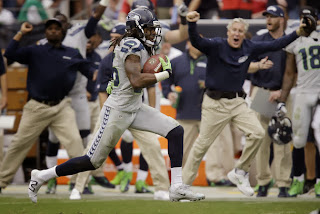 A late 4th Quarter interception ran back for a touchdown by Richard Sherman tied the score and led to a 23 to 20 victory in overtime by the Seattle Seahawks. The Houston Texans, one of the AFC's premier teams had a 20-3 halftime lead over the Hawks.  It was the biggest comeback win by the team since 1997 and the third biggest in the team's history.
The Seahawks are 4 and 0 for the first times in it's history.
Posted by Mike Barer at 6:15 AM 0 comments

Barers Of Maple Valley is competing in King 5' Evening Magazine's The Best Of Western Washington competition.  The catagory is "Best Neighborhood Blog".
Although not all it's stories are about Maple Valley, we keep our eyes open to the goings on around this wonderful area.  One thing to be mindful of is we have published at least two or three times a week for the last 7 years.  If you like what you read enough to vote us the best on this side of the state, please click here!
Posted by Mike Barer at 9:49 AM 0 comments 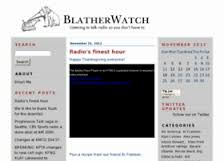 Michael Hood has confirmed that BlatherWatch, the local radio talk show blog he has written for many years is out of publication.  The blog was started as right wing talk show stations such as KVI and KTTH were starting to not only gain a foothold in the community, but seemed to have an effect on some local policy making.
The blog was razor sharp, often funny, and always informative and although Hood was definitely Liberal, progressive hosts were not immune from his criticism.  Blatherwatch famously went after Liberal KIRO Radio Host Mike Webb, a very troubled individual whose life ended tragically.
The blog's inside look at the local radio market provided the background for many stories on this blog.  In the last few years, he provided a nostalgic look at local radio from the 1960s and 1970s on Saturdays.
As Michael would headline a post in his own blog.  RIP BlatherWatch ?-2013.
Posted by Mike Barer at 8:00 AM 4 comments 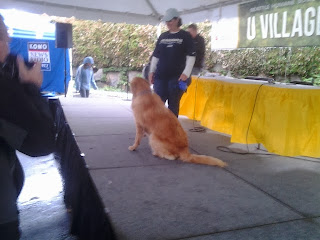 For the 4th year in a row, we entered our dog in the U-Village Fido Fest.  As the name would indicate, it is a dog extravaganza, with vendors and contests, as well as a walk to raise money for the Seattle Humane Society.  This was Dasher's second year attending.  The preceding two years before that, Rusty was the undisputed king of the Savvy Senior competition.. Last year in Dasher's first competition, he was runner-up in the Seattle Top Dog competition.  This year, Dasher competed in the dog that looks like it's owner competition (Deb wore a blond wig and both wore Seahawk jerseys) and the Seattle Top Dog. This year, Dasher did not win in any categories, but had a great time. 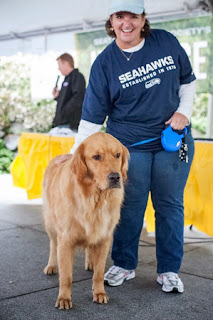 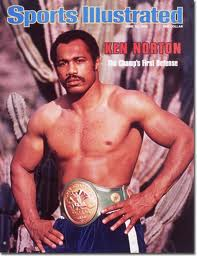 Boxing legend Ken Norton, who broke Muhammed Ali's jaw to win the North American heavyweight championship in 1973 has died.  Norton, would go on to fight Ali 2 more times, both defeats..  At the time, boxing was a much more popular sport than it is today, due mostly to Ali's charisma, Norton was virtually unknown before his first bout with Ali, but his victory over the man considered "The Greatest" quickly put him into the public eye and into history.
Norton's son, Ken Norton, Jr played in the NFL for 14 seasons with the San Francisco 49ers and is now an assistant coach for the Seattle Seahawks.
Posted by Mike Barer at 10:39 PM 0 comments 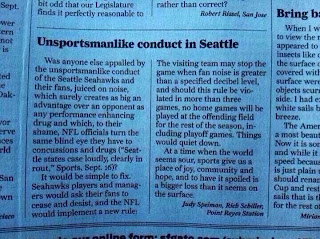 This is surely going viral, a San Francisco 49ers fan wrote a letter to the editor of a local paper saying that the NFL should make rules taking the crowds out of the game.   One of the great things about football is it gives the fans a chance to make an impact.   Of course, this letter is aimed at the Seahawk fan base, after the team beat the 49ers 29-3 and could have beat them even worst had we not taken a knee late in the game.
Posted by Mike Barer at 11:05 PM 0 comments 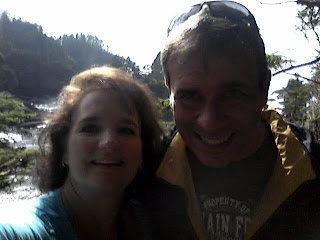 Cape Flattery is the most Northwestern part of the United States.  It is located about 60 miles north of Forks on the Olympic Penninsula.
Posted by Mike Barer at 6:27 AM 0 comments 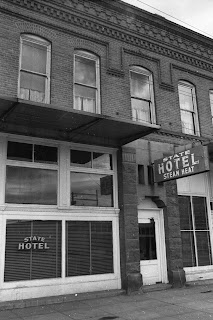 The State Hotel was across from my dad's shop on 4th and Rose.  It turned into a low income dwelling for a while and then was torn down.  Few tears were shed after the building was brought down, but this picture from the Bygone Walla Walla blog brings back memories.
Posted by Mike Barer at 7:30 AM 0 comments 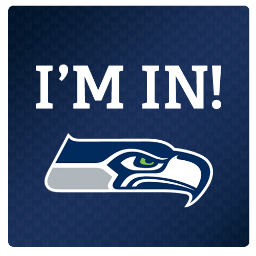 A huge match up between the Seahawks and 49ers is in storm delay.  The game between these bitter NFC West rivals, will hopefully resume soon.  Big lightning bolts can be seen here in Maple Valley.
Posted by Mike Barer at 6:52 PM 1 comments 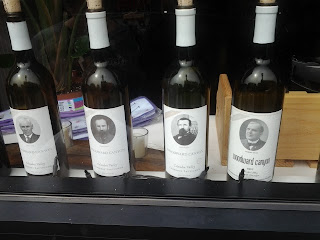 The French Hen Wine And Cheese Shop in Seaside featured Walla Walla wine from Woodward Canyon Winery in Lowden.  The bottles had pictures of various pioneers from the Walla Walla area including Gilbert Hunt and Tom Copeland.
Posted by Mike Barer at 5:00 PM 0 comments 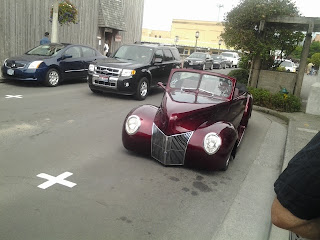 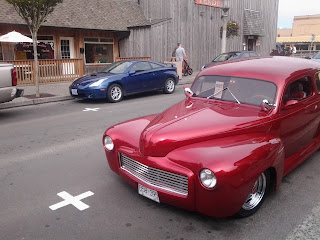 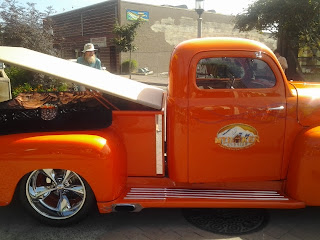 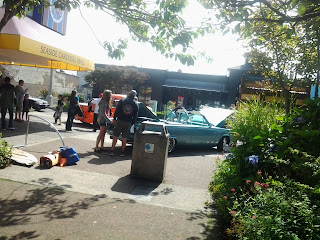 We were fortunate to be in Seaside during it's Wheels And Waves car festival.  It featured cars from 1962 and older.  Friday, Broadway (Seaside's Main Street) was blocked off for the event with cars parked all along the street..  Saturday, which was sunny and warm, featured a parade.  Vintage cars could be seen in every parking lot in the town.
Posted by Mike Barer at 10:47 PM 0 comments

We Will Not Forget 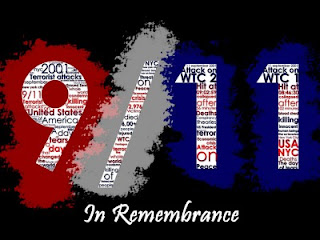 Politics in Western Oregon run left of center as shown by this  V dub, seen in Seaside... 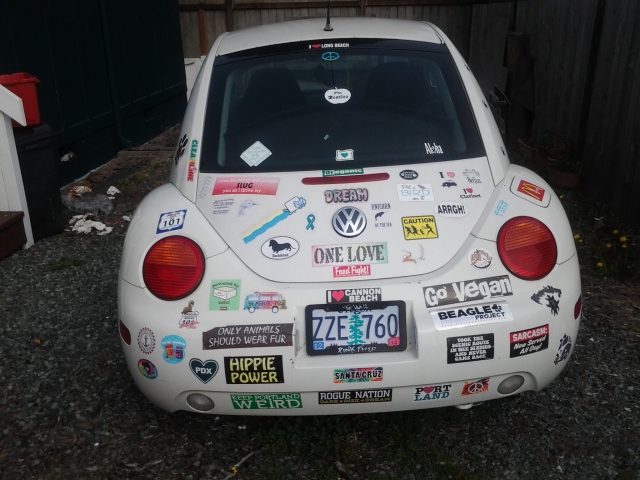 A Weekend In Seaside 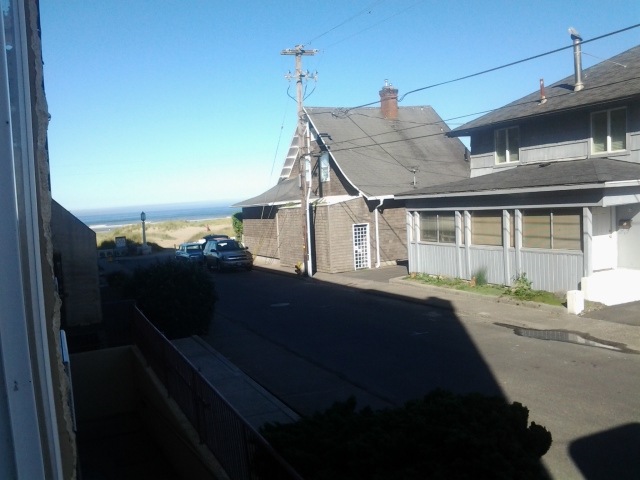 High Hopes For The Seahawks 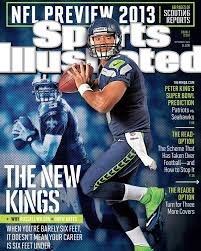 Going into the 2013 season, the Seattle Seahawks are the sexy pick to win all the marbles. Title thirsty Seattle fans, who suffered through some let downs before, are cautiously optimistic.  Hoping that the Sports Illustrated cover jinx is really a myth, Russell Wilson adorns this week's cover.
Posted by Mike Barer at 10:42 PM 0 comments 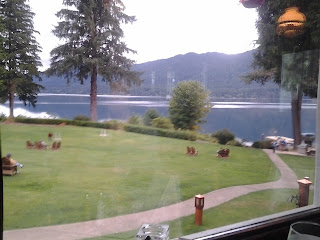 Just minutes from the sweeping ocean views at Kalaloch Lodge, Lake Quinalt Lodge affords lovely views of the Lake.  Not far away is the world's largest Spruce tree.
Posted by Mike Barer at 10:35 PM 0 comments 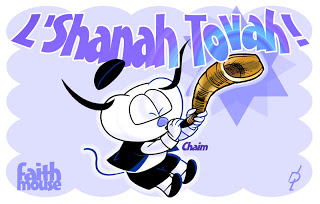 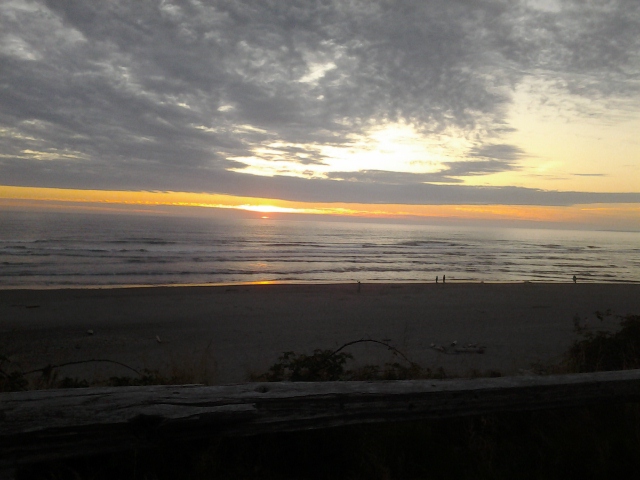 We spent the Labor Day weekend at the Kalaloch Lodge, in the Olympic National Park.  We took this breathtaking picture from the cliff overlooking the Pacific Ocean at the lodge.  I will post more pictures soon.