I Meet The President (Not Really) On Halloween 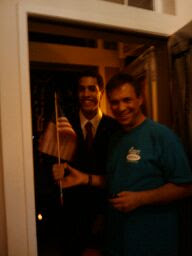 I'm posing with a Trick or Treater who came to our door dressed as Barack Obama.

This Is It--For A Michael Jackson Movie, You Can't Beat It 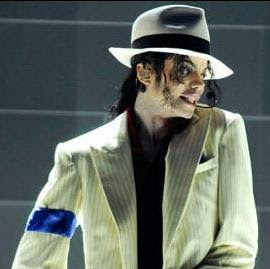 We saw "This Is It" last night at the Crossroads Cinema in Bellevue. No matter how crazy Michael Jackson was perceived, like a "fish in water" Michael Jackson was in his element on stage. If you like Michael's music, even casually like I do, this is a very enjoyable movie.
The movie shows Michael preparing for the tour that never happened. It goes behind the scenes, introducing dancers and choreographers, and giving us a little peek into what goes into the preparation for a world tour. It also plays an excellent sampling of the MJ music that we all grew up with.

Email ThisBlogThis!Share to TwitterShare to FacebookShare to Pinterest
Labels: Crossroads Cinema, Michael Jackson, This Is It 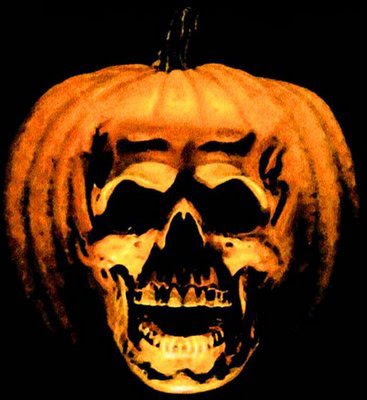 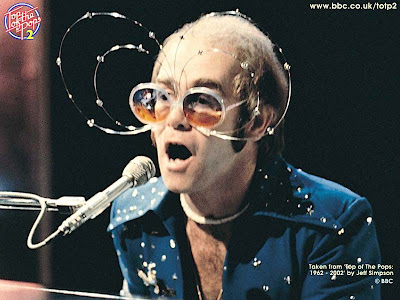 Seattle is downcast, Boeing's second 787 line is heading for South Carolina, the great Seattle Seahawk tackle Walter Jones' career appears to be finished, nothing like the Billy Joel-Elton John concert to cheer us back up--uh oh, the concert, scheduled for this Wednesday in Key Arena, has been postponed due to Elton John's bad health. Word is, we should hang on to our tickets as promoters will try to reschedule. A second concert set for the following Saturday was also postponed.
Posted by Mike Barer at 11:06 PM 0 comments 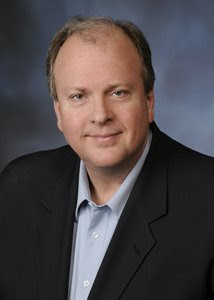 The Seattle Times has endorsed longtime Sammamish community activist Tom Vance for Position 3 of the Sammamish City Council. According to the Times, Vance's experience on the city's planning commission and parks advisory committee, along with his 15 years of living in the city, make him a more qualified candidate than his opponent, Seattle TV personality John Curley. Curley, thought to be a "stealth" Republican, is thought to be the favorite because of name recognition. In the race for position 7 of the Sammamish City Council, the Times endorsed Tom Odell over longtime incumbent, Jack Barry.
Posted by Mike Barer at 8:59 PM 0 comments

My Views On The King County Executive Race 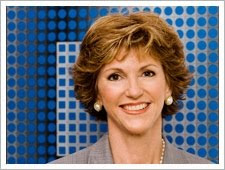 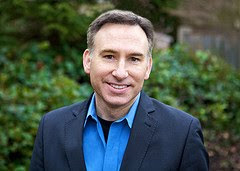 Candidates for King County Executive Susan Hutchison and Dow Constantine participated in a debate last Tuesday. Hutchison has two things going for her, one being name recognition, she was a television news anchor on KIRO for many years, and the lack of being part of a now very unpopular county government. Dow has served in the State legislature in both the House and the Senate and currently serves as President on the King County Council. Since he is a Democrat, Hutchison links him with former Executive Ron Sims. For the first time ever, all elective offices in King County will be non-partisan. Since King County generally votes Democratic, it is hard for Republicans to win positions. A non-partisan election makes it possible for Republican candidates to run without carrying an unpopular brand. Susan Hutchison claims to be independent, but her paper trail and history suggest otherwise. I believe that she is the wrong choice for county executive.
Will voters do the research necessary to find out more about both of these candidates? It's hard to tell. Many people vote on emotion. Many candidates feel that King County ignores it's outlying suburbs. Dow is seen as very "Seattle-Centric". In this cycle, he is trying to prove otherwise, that tends to raise skepticism. The question is, what would Hutchison do to bring the Eastside and South County suburbs to the table?
Posted by Mike Barer at 8:18 AM 0 comments

The Seattle Times reports former interim County Assessor Rich Medved died today, three months after suffering a stroke. Medved had been Deputy County Assessor under Scott Noble. When Noble was no longer able to serve after a vehicular assault conviction, Medved took over the management position. Medved was campaigning for the position when he was stricken.
Posted by Mike Barer at 9:28 PM 0 comments 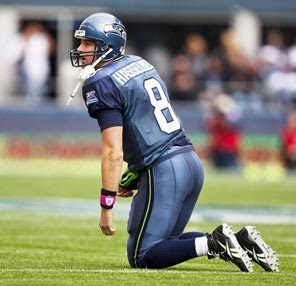 It took only seven days for the Seattle Seahawks to go from hero to zero in a 27-3 loss to the Arizona Cardinals. Somehow, the 'Hawks lacked the fire that sparked a 41-0 drubbing of the Jacksonville Jaguars a week ago. The defeat can partially be blamed on the frustration of the defense, failing to halt the Cardinals on 3rd down five consecutive times. The inability to make the big stop helped take the "12th Man" factor out of the equation. After the Cardinals first touchdown they got the ball back on a Seahawk kick-off receiving miscue, resulting in another touchdown. The Seahawks were down 14 to nothing by the time Matt Hasselbeck and the offense took the field for the first time. The Seahawks also lost linebacker Lofa Tatupu for the remainder of the season.
Thank you to Dean Rutz and the Seattle Times for the picture.
Posted by Mike Barer at 6:26 PM 0 comments 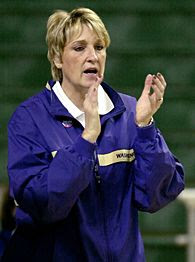 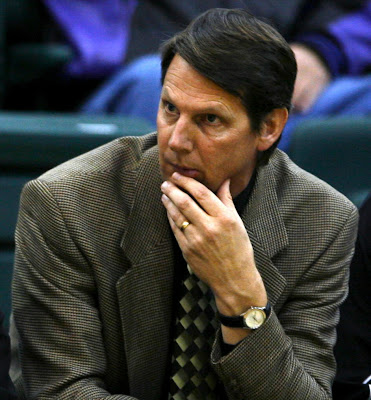 Enthusiastic Cougar Fans met Saturday night in the Grand Ballroom of Hyatt Regency in Bellevue for food, drink, and a preview of the upcoming WSU Men's and Women's Basketball season. The dinner, sponsored by Sterling Savings Bank, featured Women's Head Coach June Daugherty, Athletic Director Jim Sterk, and first year Men's Basketball Coach Ken Bone. Cougar stadium announcer, Communications Professor, and Pullman Mayor Glenn Johnson was MC.
Both Coaches spoke of the need to upgrade facillities in order to compete in the Pac-10. Bone takes over a team that had made 3 consecutive post season appearences, including the NCAA Sweet 16 in 2007-2008 under departing coach Tony Bennett. Daugherty lead the Cougar woman to their highest finish in 10 years in her first year at the school.
Both coaches emphasized the youth of their programs and the need for fans to be patient.
Posted by Mike Barer at 5:37 PM 0 comments

5th District Chair Jennifer Sutton was moderator. Dr Schwab started the discussion by speaking on the current state of health care. Mr Stern spoke about how close congress is to getting some type of public option passed, he eluded to the history of health care reform and how our system compares with other industrial nations around the world.
Stern said that with a public option available, workers would be able to have more options to seek employment, not having to worry about losing coverage. Dr Schwab spoke about the tremendous time and costs of billing and administration involved with the current system.
The forum was attended by Issaquah Mayor Ava Frisinger and two members of the Issaquah City Council. A buffet dinner was also served.
Posted by Mike Barer at 10:32 PM 0 comments

Scenes From My Dad's 80th 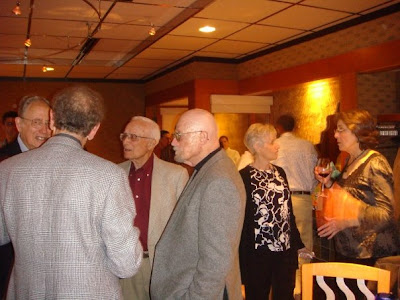 Friends of my Dad 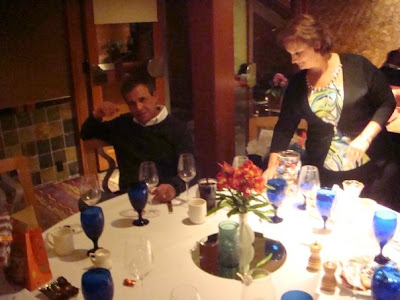 Me, in a curious pose, probably unaware of the camera, also my wife 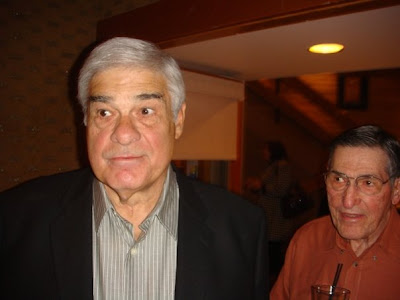 My Dad with his brother Arny on the left 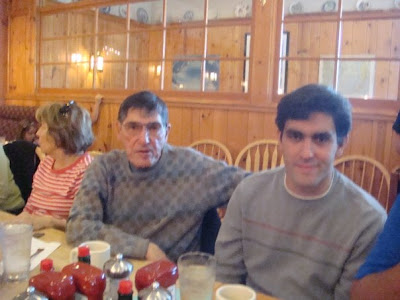 My Dad and my brother Steve 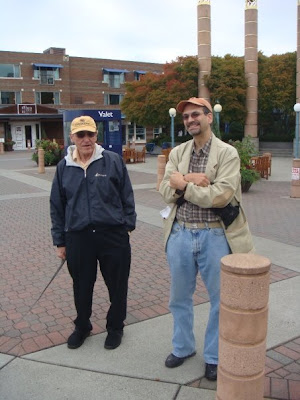 My Dad and my brother Danny 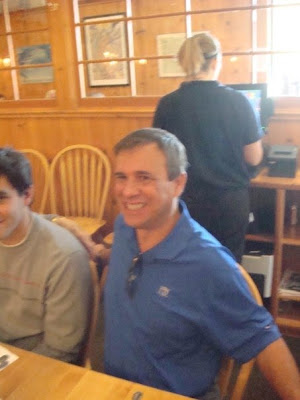 My brother Steve and I
I want to the thank my brother, Danny for these great pictures, the top three from my Dad's 80th birthday party at Anthony's in Kirkland. The bottom three are from the brunch at the Kirkland Pancake House.
Posted by Mike Barer at 6:12 AM 1 comments

The Seahawks Run Away With It 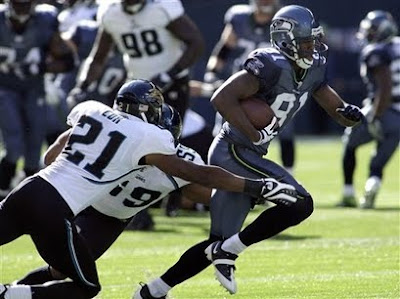 In what has been a very frustrating season, the term "blow-out" is generally not associated with a Seahawk win, however they celebrated the return of quarterback Matt Hasselbeck with a 41-0 victory over the Jacksonville Jaguars. The Seahawk defense was dominating as Jacksonville failed to make a single big play. Hasselbeck threw 4 touchdown passes, 2 each to TJ
Houshmandzadeh and Nate Burleson. This was only the second victory for the 'Hawks who also shut out the Rams in the first game this season. Both victories were at Qwest Field.
Posted by Mike Barer at 10:47 PM 0 comments

And He's Proud Of It

Golfers Will Tee Up At Olympics 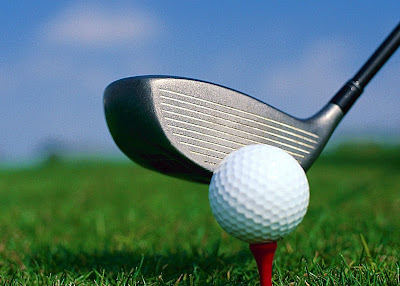 After a long absence, Golf will be returning to the Summer Olympics in 2016. The International Olympic Committee approved the bid in Denmark after being lobbied by the International Golf Federation The last Olympics to host Golf was in 1904, when Canadian George Lyon shot a 77 to win the Gold. Rugby will also coming back to the 2016 Summer Games which will take place in Rio de Janeiro.
Posted by Mike Barer at 12:14 PM 0 comments 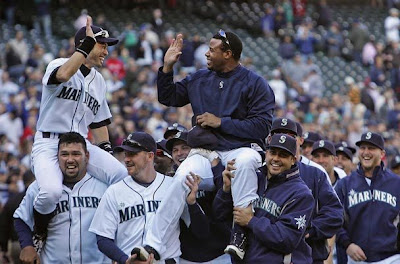 Ichiro and Ken Griffey, Jr. are carried off the field as the Seattle Mariners become only the 13th team in Major League history to finish a season with a winning record one year after losing 100 games. Ken Griffey got a hit in what may have been the last at-bat in his career. A third place finish in the AL West may not seems like something to celebrate, but fans are hoping that it is the sign of better things to come. The Mariners 4-3 victory over the Texas Rangers, by the way, marked the 19th victory of Felix Hernandez.
Posted by Mike Barer at 9:30 PM 0 comments

Seahawks Drop 3rd In A Row 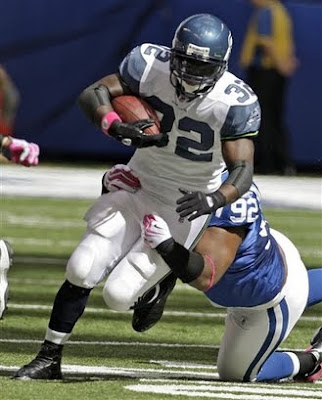 Taking on Peyton Manning and the Colts in Indianapolis would have been a tall order for a Seahawk team at full strength, let alone a banged up, squad missing 2 of it's greatest players.
Manning threw for 353 yards and two touchdowns in a 34-17 victory. Seahawk Quarterback Seneca Wallace threw for 257 yards and one touchdown in valiant effort. The Colts are now 4 and 0 on the season--Seattle is 1 and 3.
Posted by Mike Barer at 9:35 PM 0 comments 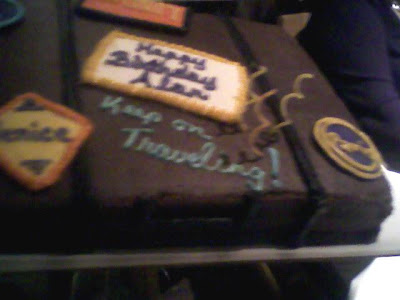 A contingent of family and friends filled Kirkland's Anthony's Homeport to help my Dad celebrate his 80th birthday. Many in attendance were friends from college coming as far as Los Angeles. Also there were my brother, Danny and his wife, my brother Steve, my Dad's brother Arny and his wife Carol, my cousins, Joe and Sam and of course my Dad's wife, Jean who planned the party. My Dad's friend Aaron Epstein made a beautiful presentation.
The birthday cake pictured above referred to my Dad's passion of world traveling. Lorrissa, a friend of my wife, provided piano music and lead a sing-a-long.
Posted by Mike Barer at 9:46 AM 0 comments 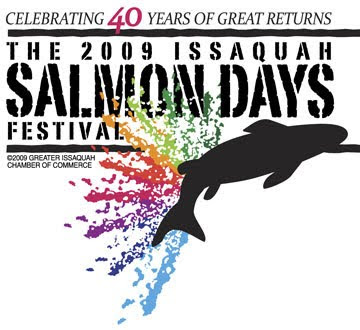 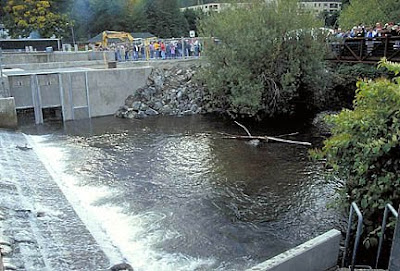 Pretty much the last outdoor festival of the season, Salmon Days takes place this weekend in Issaquah,Washington. It encompasses the entire downtown and has food, music,art exhibits, and much more.
Posted by Mike Barer at 8:12 AM 0 comments