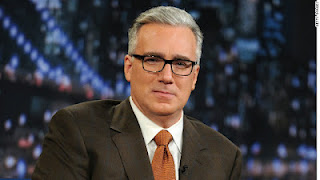 TV writer Ken Levine reports on his blog that mercurial Liberal commentator Keith Olbermann has been fired from his latest network, Current TV.   Olbermann had been at the network that was co-founded by former Vice President Al Gore for less than a year after losing the job that brought him the most fame, hosting countdown at MSNBC.  Previously a sportscaster, Olbermann had also worked for ESPN and Fox Sportsnet.
Posted by Mike Barer at 8:19 PM 0 comments 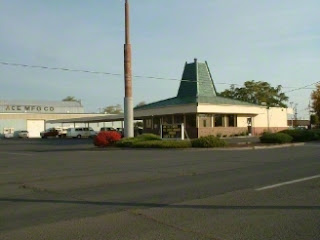 The Walla Walla Union-Bulletin reports that landmark Walla Walla Restaurant, Mr. Ed's, has reopened, a few weeks after ceasing operations due to lower crowds and high food costs.  The restaurant on East Isaacs had at one time been an A &W Root Beer Drive In, but had become independent in the early 70s, after the root beer giant started marketing in local grocery stores.
Now one of Walla Walla's oldest restaurants, the announcement of Mr. Ed's closing was met with expressions of sadness on social media sites.  Co-owner Dan Givens, a Walla Walla High School classmate of mine, says that the reopening was made possible by shortening the hours of operation and reworking the menu.
Posted by Mike Barer at 8:02 AM 0 comments 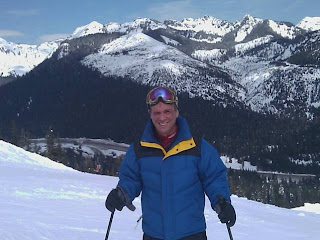 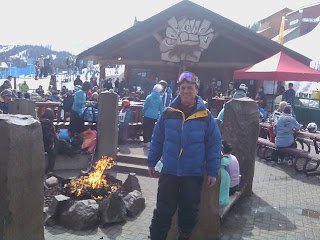 My buddy Rick and I spent yesterday afternoon skiing at The Summit at Snoqualmie. It was a beautiful sunny day, and people were sitting outdoors at the lodge where a  local band provided live music.  It was my first time skiing in about 10 years, but still loads of fun.
Posted by Mike Barer at 11:17 AM 0 comments

Email ThisBlogThis!Share to TwitterShare to FacebookShare to Pinterest
Labels: The Summit At Snoqualmie, Washington Skiing. 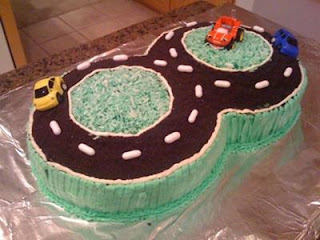 Manning Now A Horse Of A Different Color 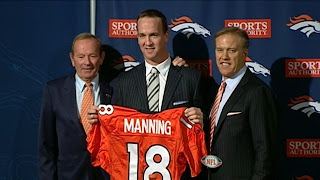 Peyton Manning went from being a Colt to a Bronco this week.  After days of being one of the most sought after free agents in NFL history, Manning has decided to play for previous quarterback legend John Elway, now Denver's GM.
Manning follows fellow Colt Johnny Unitas, Joe Namath, and Joe Montana as quarterback greats who finished with different teams than where they carved their legend.
Posted by Mike Barer at 6:30 AM 0 comments 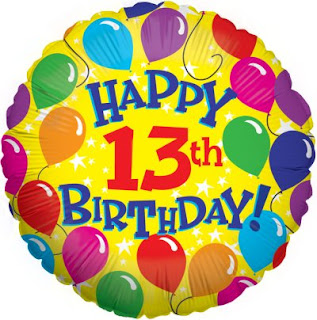 My oldest nephew is now a teenager!
Posted by Mike Barer at 7:31 AM 0 comments

Last night we attended "Dancing With The TBT Stars, a benefit for the Temple B'Nai Torah youth education program.  5 couples including the ones in the above video competed in the temple's version of ABC's popular "Dancing With The Stars" program.There was also a silent auction as well as a live auction, in addition, there was a raffle for a Nordstroms gift certificate.   In the end, everyone left with smiles on their faces and much lighter wallets.
Posted by Mike Barer at 11:07 PM 0 comments 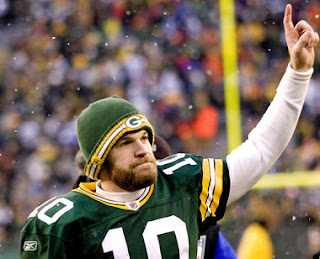 It seems familiar, a back up Green Bay quarterback is coming to town to lead the Seahawks. In 2001, Mike Holmgren brought a then unknown understudy to Bret Favre named Matt Hasselbeck to towns.  Now it has been reported that Packer Aaron Rogers' back up Matt Flynn has just been signed to be the Seahawks new starting quarterback.  Flynn was a seventh round draft pick in 2008 from LSU.
Posted by Mike Barer at 3:34 PM 0 comments

"Feeling good was good enough for me"  that line points out that being happy is what life is really about.
Posted by Mike Barer at 11:56 AM 0 comments

Winter Not Over Yet 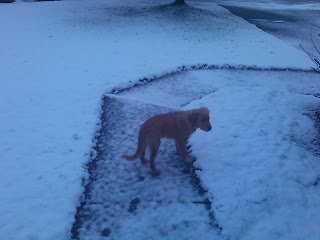 Seattle area is hit with a mid-March snowfall.
Posted by Mike Barer at 8:30 AM 0 comments 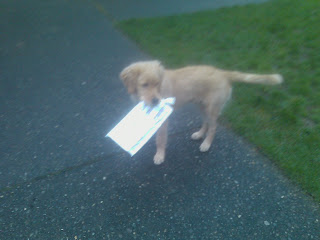 Every morning, Dasher will walk down the driveway and bring the Seattle Times to me.  Except on Sunday's when the paper weighs a ton.  Not bad for a 4 month old!
Posted by Mike Barer at 3:44 PM 0 comments 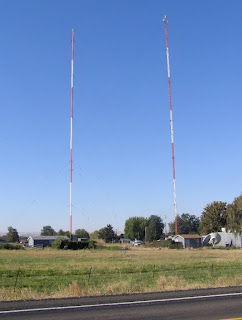 With a reputation of being a somewhat "loose cannon", Jim Nelly bought Walla Walla radio station KUJ in the mid 70s and local radio was never the same.  Changing the station from Middle Of The Road to 24 Hour Hit Radio, the station (the oldest and most powerful in the city) spoke constantly of it's high ratings and big contests. It was the dawn of the disco era and KUJ was able to capitalize on it.  Movies like Saturday Night Fever were rendering constant hits. Nelly gave catchy, sometimes rather silly radio names to his DJs like Mason Dixon and Wee Willie Winkle.  The theory is that in personality radio, "Dr Love" is easier to remember that "Steve Brown".  A few years later, KHIT, a local rival, launched a Hit Radio FM station known as XT97, Walla Walla suddenly had 2 commercial Rock stations.
He also acquired the Walla Walla Padres, the city's Northwest League baseball franchise. Nelly had his wife, Patricia (Peppermint Patty) run the baseball team, adding beer sales, as well as a wide variety of stunts, loudly promoted on the station.  Although, Nelly was considered quite a flamboyant presence in a small quiet town, he reportedly sold KUJ in the early 80s at a value that was many times higher than when he bought it.   Nelly died last week.
Posted by Mike Barer at 6:44 AM 1 comments 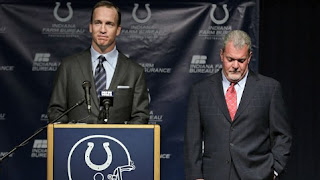 When was the last time the Seattle Seahawks landed a big time free agent?  Reports are out that the Seattle Seahawks have entered the Peyton Manning Sweepstakes.  Manning, who lead the Colts to 2 Super Bowls and one victory is an alumni of Tennessee where my wife went to College was just released .  The future Hall Of Famer would, if healthy, add swagger if not a Super Bowl to the 'Hawks, but there are other teams gunning for him and he may not be warm to the idea of playing on the West Coast.
Posted by Mike Barer at 10:51 PM 0 comments

Marshawn Lynch Will Remain A Seahawk 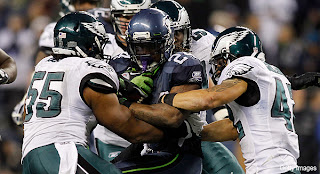 Marshawn Lynch has just signed a four year $31 Million dollar contract with the Seattle Seahawks.  Lynch, who came to the 'Hawks in a trade with Buffalo in 2010, had a slow start last season but a strong finish netted the running back over 1200 yards and 12 touchdowns.  Lynch's 60 plus yard touchdown in the play-offs against New Orleans will be remembered as one of the most electrifying moments in Seattle sports history.
Posted by Mike Barer at 10:31 PM 0 comments 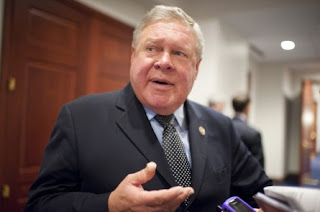 He may be the last titan of Washington politics, Norm Dick, who has represented Washington's 6th Congressional District (Bremerton) since 1976 has announce that he will not seek reelection.  Dicks is the Ranking Democrat on the House Appropriations committee.  In 1994. when Republicans swept into power in the house, the only Democrats left standing that year were Jim McDermott, who represented Seattle and Norm Dicks, who was well regarded by both parties. The Democrats later won back several of the lost seats. He has been credited with the clean up of Puget Sound and bolstering defense spending in our state. He has been hailed as a friend to Boeing and the Hanford Nuclear Reservation.
Before his election to Congress,  Dicks served on the staff of Legendary Senator Warren Magnuson.  He was a football star for the Washington Huskies, playing on the Rose Bowl team in 1960.
Posted by Mike Barer at 12:16 AM 0 comments 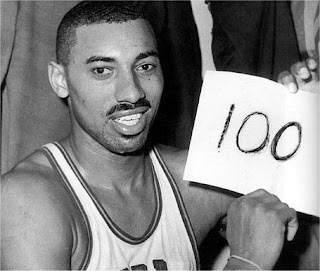 On May 2nd, 1962, Philadelphia's Wilt Chamberlain scored 100 points in an NBA game, no other player had done that before or since.  Seattle Times Sports columnist, Steve Kelley, a native Pennsylvanian, wrote this piece on the big game. Click here.
Posted by Mike Barer at 7:55 AM 0 comments

This will bring memories of my childhood and yes, I know that's the wrong way to spell cartoon!
Posted by Mike Barer at 10:57 PM 0 comments