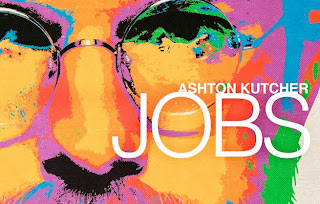 For those who want to see the movie Jobs to get insight on how Steve Jobs built a so-called revolution, they may be disappointed.   For those who want to see a predictable biographical drama that could have just as easily been about Bill Gates, Howard Schultz or Jeff Bezos, the movie is very entertaining.
Ashton Kutcher is definitely right at home playing Jobs from California native hippie to mature Silicone Valley executive.  While ruthless and reckless, Jobs is someone you root for, although you don't know why.  Perhaps, it's because you love your I-Pod or I-Phone.  While the "damn the torpedo's" Jobs is finally dumped by the company that he created, a more mature Jobs is rehired to take the company to success.  Josh Gad is an ultra nerdy Steve Wozniak or "Woz", Steve's innovative, more down to earth sidekick.
Posted by Mike Barer at 11:20 PM 0 comments 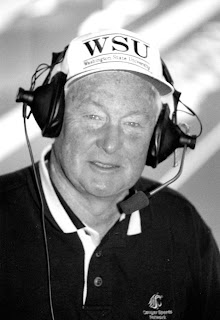 Bob Robertson, the voice of Washington State Cougar Football since before I was a teenager, will no longer do play by play on the broadcasts.  The Seattle Times reports that Robertson will do the pregame, and post game show as well as the halftime.  Bud Nameck, who replaced Robertson on the Cougar Basketball broadcasts and has been the sideline reporter in football, will be the new play by play announcer.
Robertson has done the Cougar football broadcasts for 46 years.  In 2004, he won the Chris Schenkel award given by the National Football Foundation and College Hall Of Fame.  Cougar fans remember his unique sign off "Always be a good sport, be a good sport always."
Posted by Mike Barer at 7:32 AM 0 comments 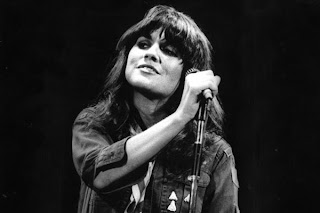 Linda Ronstadt, who embodied the California soft Rock sound of the early to mid-Seventies, has disclosed that she is suffering from Parkinson's disease and no longer able to sing.  The singer, known for her full range voice and homey dress is an 11 time Grammy winner.  Her cover of Buddy Holly's "Your No Good" is her only number 1 song, although she has had 10 songs in the top 10.
Posted by Mike Barer at 10:31 PM 0 comments 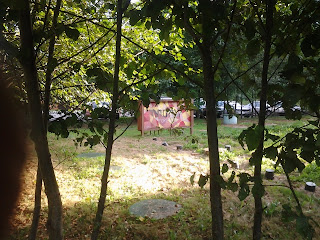 Our cousin's daughter selected a very unique venue for her Bat Mitzvah.  Camp Kalsman is a summer camp for Reform Jews located near Arlington, WA.  Before it was a summer camp, it was the compound for the Love Israel commune.   It was a lovely setting for the festive event.  My favorite event was the dinner Saturday Night held outside in the garden.
The service was scheduled to be outside, but was moved to the dining hall because of rain.  The evening concluded with a loud raucous dance in the dining hall.
Posted by Mike Barer at 6:30 PM 3 comments

I was walking Dasher down the Lake Wilderness Trail when I heard Beatle music playing--I thought maybe there was a wedding at the Lodge.   When I got to the park, I realized  I had walked into Maple Valley's weekly Music In The Park.  Creme Tangerine, a Seattle based Beatles tribute band was playing.   There was a great turn out of people, who brought lawn chairs, blankets, and coolers. Lake Wilderness made a great backdrop.
Posted by Mike Barer at 11:21 PM 0 comments

The Way Way Back: A Review 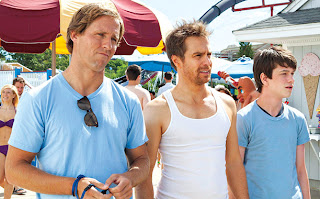 The Way Way back may not be the greatest movie made, but it certainly hit home with me. It starred Liam James as a shy 14 year old named Duncan coming to terms with adolescence.  He is with his family on their way to the beach as any family would in the middle of the summer.  His step dad tries to engage him, but Duncan is trying his best to ignore him.  At first I thought the step-dad Trent (who is played by Steve Carell) is over-protected of him, but soon it is clear that his motives are not well meant.    Upon arriving, Duncan meets girls around his age, but his awkwardness makes it impossible to have fun with the other teens.
It turns out that the beach local is more oriented toward the adults having fun than the kids, so Duncan wanders off and meets a big brother type named Owen (Sam Rockwell), who manages a water park and takes the kid under his wing.   Owen has a smart alec attitude that masks his heart of gold.  He begins to work toward getting Duncan out of his shell.  I think that the strength of this movie, which played in a limited amount of theatres is how easy it is to relate to the characters.
Posted by Mike Barer at 10:57 PM 0 comments

Email ThisBlogThis!Share to TwitterShare to FacebookShare to Pinterest
Labels: The Way Way Back

Dasher was a great host to 2 different dogs this weekend. Brother Steve brought a German Shepherd on Friday. After they left, Dasher's friend Charlie came to spend the night. 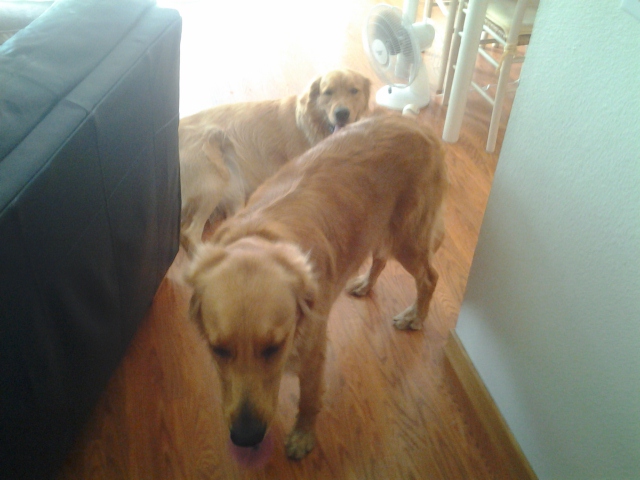 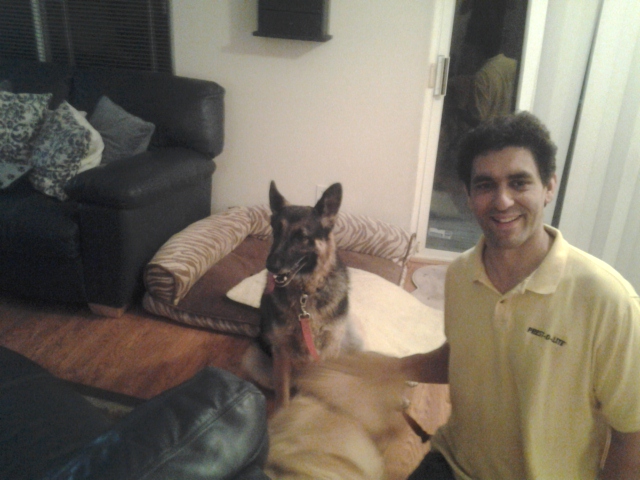 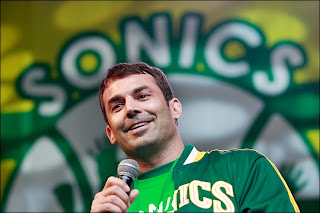 Chris Hansen, who tried unsuccessfully to purchase the Sacramento Kings and bring them to Seattle has been revealed to be the secret donor behind an attempt to put the Sacramento arena proposal that it's City Council passed up for a public vote.
Hansen has said that it is a decision that he regrets, however it remains to be seen if Seattle city officials and the NBA (not exactly known for it's credibility in the Sonics move), and Seattle area citizens will trust him going forward.   It's pretty clear that the idea of the Kings moving here is DOA, but we need to stay tuned to see if Hansen is the man to bring NBA back here either by move or expansion.
Posted by Mike Barer at 7:37 PM 0 comments 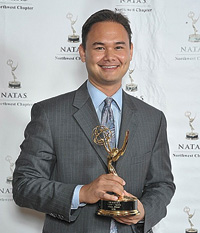 Aaron Levine is a somewhat familiar face on Puget Sound TVs for a couple of reasons.  First and foremost, his station Q-13 is the local Fox affiliate, since the network carries the NFC, the lion's share of Seahawk football will be on that station.  Seahawks after all are in the NFC.  In addition, he hosts Seahawks Saturday Night, and Seahawks Gameday, as well as Q It Up Sports, a Sunday night look at whats happening in the Sports world.
However, before he got the Seattle gig, Levine flirted with fame as a contestant on the reality show, Dream Job.  It was a show where the winner was awarded a one year contract as an ESPN anchor.  Levine, who had taken a quarter off from Stanford so he could fly back and forth from San Francisco to New York, finished second.  He is now happy that he did not get the ESPN job, figuring his lack of experience would have stunted his growth in the field.   He spent the next couple of years working at a station in Bakersfield before getting the job at Q-13 in 2007 at the age of 25.
Levine is now the sports director at Q-13.  A native of Calabasas, CA, his favorite hobby is golf.
Posted by Mike Barer at 8:13 PM 0 comments 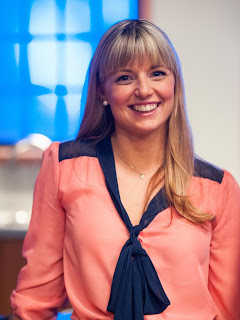 Southern Cooking Chef Damaris Phillips beat "The Pie man" Rodney Henry to win this year's Next Great Food Network Star.  The reality show on the Food Network has as it's reward, a show for the contestant on the Food Network.  I normally do not blog about the show, but unlike most of the past winners, most of whose shows have been cancelled, this lady has a high degree of star power.    Guy Fieri, was one of the winners of the competition to have staying power (along with Jeff Mauro,the Sandwich Guy), but with the recent departure of Paula Deen, it looks like Damaris could be a breakthrough. She has a winning smile and an inviting personality.  She was a slow starter, who gradually improved as the season progressed.  She apparently has real cooking chops too.
Posted by Mike Barer at 10:57 PM 0 comments 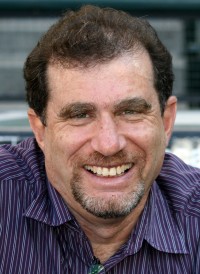 If you were looking for the MLB power rankings in the sports section of today's Seattle Times, they were no where to be found.  The reason was that Larry Stone has been taken off the baseball beat.  Seattle Times Sports editor Don Shelton announced  in today's paper that Larry Stone will fill the position left vacant when Steve Kelley left the paper as  Sports opinion columnist.  In addition to covering Mariner games, Stone's inside pitch page gave Times readers incite into what was happening around the baseball world.
Shelton said that Stone had covered baseball for the Times for 16 years.  He said that the combination of Stone and columnist Jerry Brewer would give the sports page a "great 1-2 sports opinion punch."
Posted by Mike Barer at 9:57 PM 0 comments 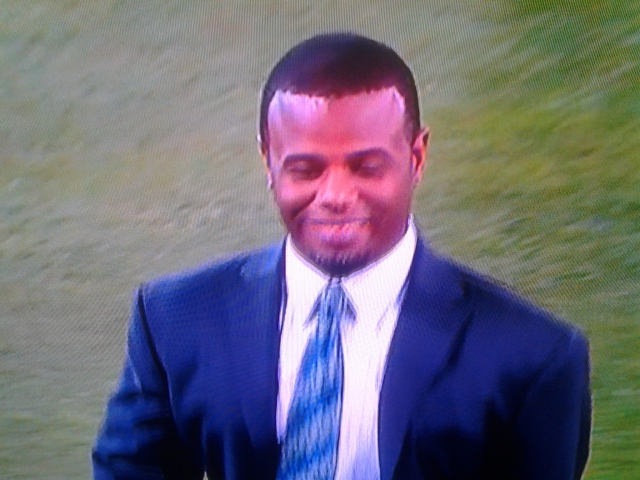 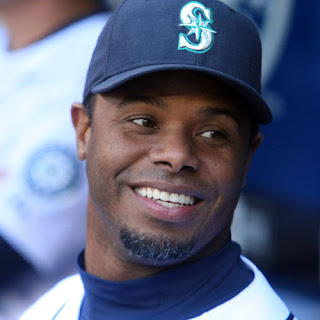 Hall Of Fame bound outfielder Ken Griffey, Jr., who put Seattle on the baseball map in the 80s and is widely credited with saving baseball in Seattle will be inducted into the Mariner Hall Of Fame in an evening ceremony.    It will be Griffey's first appearence in Safeco Field, since he left the team, by driving off and not telling anyone after a miserable season in 2010.  It was Griffey's second stint with the M's.  Jerry Brewer wrote this very compelling column in the Seattle Times.
Posted by Mike Barer at 4:01 PM 0 comments 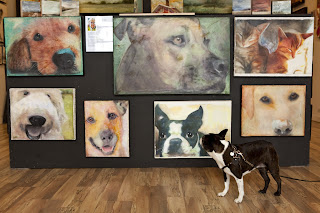 Dasher's picture is in the top left in this photo taken at the Alki Arts Gallery.  It appeared on page B-1 of the Seattle Times August 8th edition.  The dogs were all painted by Jeanne Romano.  Although Dasher is not the subject of the picture, he does appear prominently.
Posted by Mike Barer at 9:07 AM 0 comments 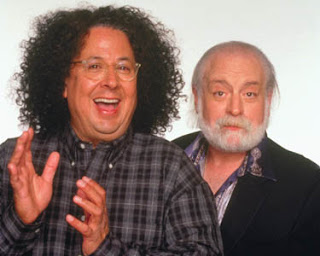 The Wall Street Journal reports that the popular band from the '60, The Turtles, has filed a 100 million dollar lawsuit against sattelite broadcast giant Sirius XM, claiming that the groups music was played without it's permission.  While, what is known as terrestrial radio does not have to pay performers for playing it's music, assuming that the airplay will boost it's sales,  sattellite radio is bound by copyright laws,  however, while federal law protects work done after 1972, works prior to the year are protected by state law. The lead singer of the Turtles is Bellevue based Howard Kaylan. His longtime bandmate Mark Volman is to his left. You can read the specifics of the case by clicking here.
Posted by Mike Barer at 7:15 AM 0 comments

Working The Hydros At KYYX 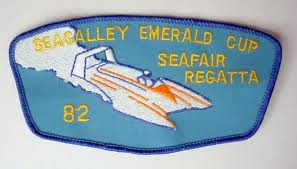 In 1982, I had been at KYYX for almost a week, I was scheduled to work the Seafair Hydro broadcast.  Not on air, but I would assist in the studio.  Pat O'Day, the owner of the station was on the "shores of Lake Washington" announcing the race. Burl Barer, my cousin, was in the studio playing "The hits between the heats" and Pat's son, Garry and I were in the studio assisting Burl.  It was something of a "family affair".
At the time, the station sponsored  the Miss KYYX hydroplane, which was driven by Brenda Jones, the first woman to pilot a hydroplane.  It was a different era as Seafair encompassed the entire town.
Posted by Mike Barer at 5:36 PM 2 comments 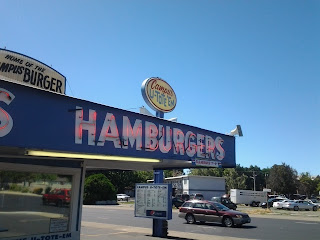 We had lunch last Friday at this burger joint in Ellensburg.  It is across the from the Central Washington University at 810 University Way.  I took the picture because independent drive-in restaurants are a somewhat disappearing commodity. 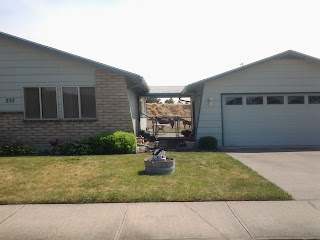 From Last weekend's Walla Walla trip, Steve and Dawn may have lost their view of the fairgrounds from their house, due to massive  house building, but at least as of now, they can still see horses across the street.
Posted by Mike Barer at 10:37 PM 0 comments 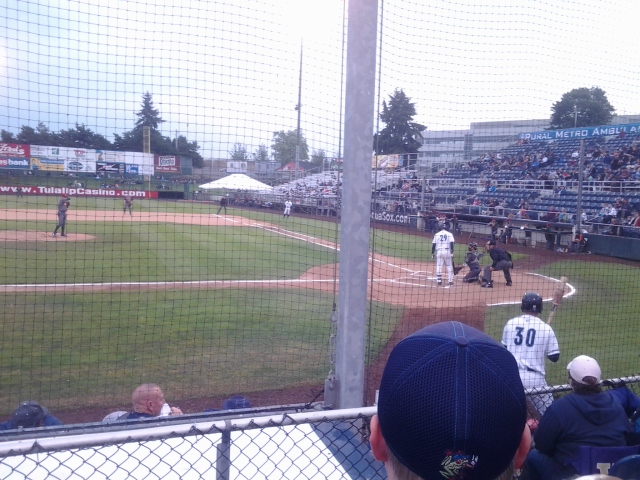