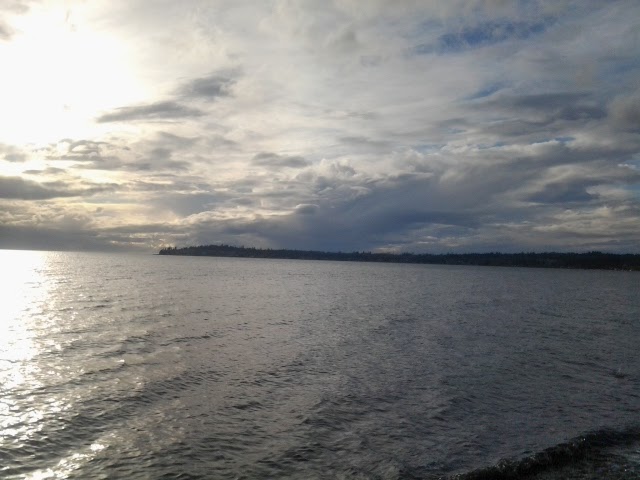 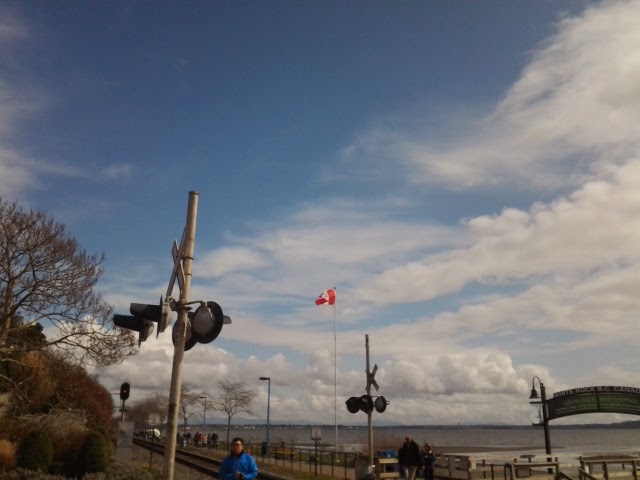 We spent this last weekend  over at Birch Bay (top picture), a quiet resort on the Strait about 100 miles from Seattle.  We met up with our friend Marjie and Rick who were in Bellingham on business.  We checked out the local restaurants, walked the beach and enjoyed a little rest and relaxation.
When our friends left today, Deb and I went up over the Canadian border to White Rock, BC.  (bottom picture) It is a beautiful seaside resort about 20 miles from Vancouver.  We had lunch at a nice restaurant on the beach called Deluxe.   We then drove a little further down the beach and walked the pier.
Posted by Mike Barer at 10:14 PM 0 comments 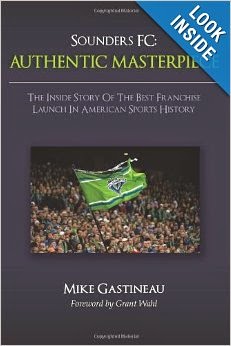 Former Sports Radio 950 afternoon drive host Mike Gastineau, has a new book out detailing the history of Seattle MLS soccer club, The Sounders.  The book is titled  Sounders FC  Authentic Masterpiece. According to the cover, it is "the inside story of one of the most successful franchise launches in American sports history."   The Sounders of course started play in 2009 on the heels of dismal seasons from the Mariners and Seahawks, and the departure of the Super Sonics.  while most expansion teams experience growing pains, the Sounders started winning as soon as it hit the field, kicking off with a 3-0 victory over the New York Red Bulls.  The team proceeded enter the playoffs in each of it's first 4 seasons.  You can see reviews, preview, or order Gastineau's book by clicking here.
Posted by Mike Barer at 8:46 PM 0 comments

Toll Rises To 14 In Mudslide Tragedy 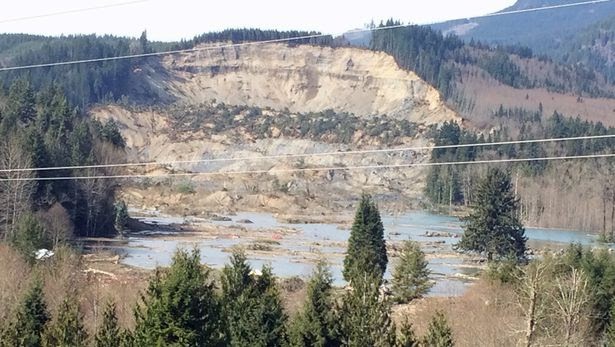 A deadly mudslide has hit Oso Washington, a rural town in Snohomish County.  Public safety officials have confirmed 14 deaths.  Also, 176 are reported missing.  This has been a tragic week for residents of the Puget Sound area as a helicopter leased to KOMO 4 TV crashed near the station in downtown Seattle, killing both people aboard.
The phone number 425-388-5088 has been set up to report people that are missing or unaccounted for, or for people, in effected areas to report that they are safe.  Anyone wanting to make donations can call 1 (800)Red-Cross.  President Obama has declared a state of emergency in the area.
Oso is 81.5 miles from Maple Valley, about a 90 minute drive.  It is located on the North Fork of the Stillaguamish River.
Posted by Mike Barer at 10:24 PM 0 comments 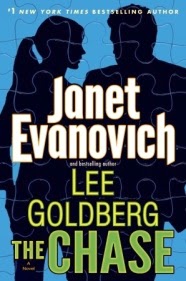 The follow up to the Lee Goldberg and Janet Evanovich best seller The Heist is now available.  The Chase continues the adventures of  die hard FBI agent Kate O'Hare and her quest to bring down con man Nicolas Fox.  Both Goldberg and Evanovich are well known for solo projects.  I read The Heist and found it very entertaining.   You can order The Chase by clicking here.
Posted by Mike Barer at 2:31 PM 0 comments

Suzan Del Bene was in Issaquah this week to speak to a group of Democrat's in the 5th Legislative District. The Freshman Democratic Congresswoman sits on the Agriculture and Judiciary Committees.  She represents Washington's 1st Congressional District which encompasses a fraction of the 5th.  The 5th also runs into the 8th Congressional District which is represented by Republican Dave Reichert. 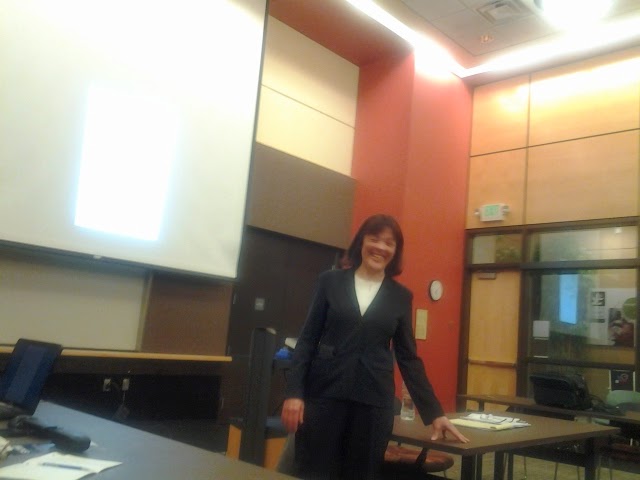 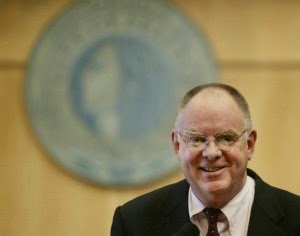 Jim Compton, former NBC and KING 5 journalist who later served on the Seattle City Council, has died at 72.  In the 1990s he hosted the Compton Report, a look at news around the Seattle area and beyond, I remember his interview with Geraldo Rivera, at the time, a leader in what was known as "trash TV", Rivera was so angered by Compton's questioning that he was heard saying "what a punk", thinking that he was off the air.
Compton was elected to the Seattle City Council in 1999, chairing a commission to review the beating death of an area resident during Seattle's Fat Tuesday celebration.  He was also a leader in getting wind farms established as a chair of the city council's utilities commission.
He did get tied, along with two fellow council members to the Strippergate scandal, which involved members of the council taking contributions from businessmen who were involved with a Seattle nightclub.  He was also fined  for riding to an NBA game on Paul Allen's jet. The Seattle PI's Joel Connally chided that the "cobra like Seattle elections and ethics commission--it will strike at anything--fined Compton $3000..."   Compton resigned from the council in 2006.
Posted by Mike Barer at 7:36 AM 0 comments 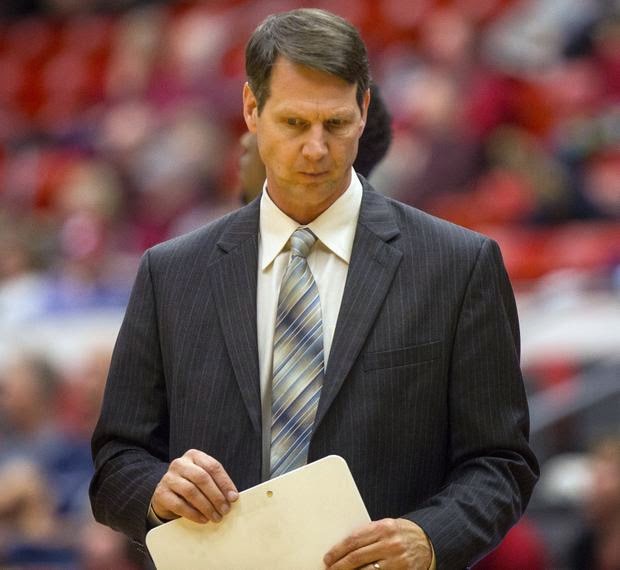 The Washington State Cougars are looking for a new Men's Basketball coach after the firing of Ken Bone.  The Cougars hired Bone 5 years ago after the departure of Tony Bennett for Virginia.  He guided them to the NIT semi finals in his second season, but his win totals dropped every season afterward. The Cougs went 10-21 this last season, 3-15 in Pac 12 Conference play.
Posted by Mike Barer at 11:15 PM 0 comments 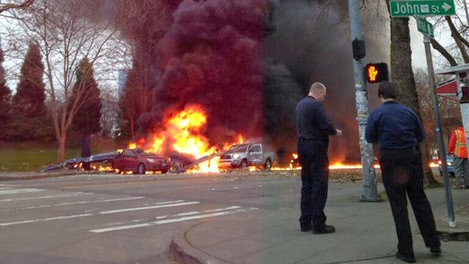 A KOMO TV news helicopter has crashed to the ground in downtown Seattle while trying to land on the Fisher Plaza helipad.  It is reported that 2 people aboard are dead.  The close knit Seattle media community, are visably shaken while reporting this horrible incident.  One other has been hurt.
Posted by Mike Barer at 8:42 AM 0 comments 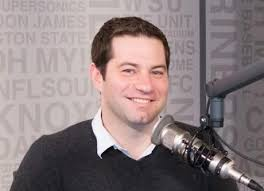 People do return to Seattle!  Mike Salk, who along with former UW quarterback Brock Huard, helped put ESPN710 on the local sports radio map, will return to the station on March 23rd.  Salk left last year to take an afternoon slot at Boston radio station WEEI.   Salk will be the station's program director and have an air slot at a yet undisclosed time. 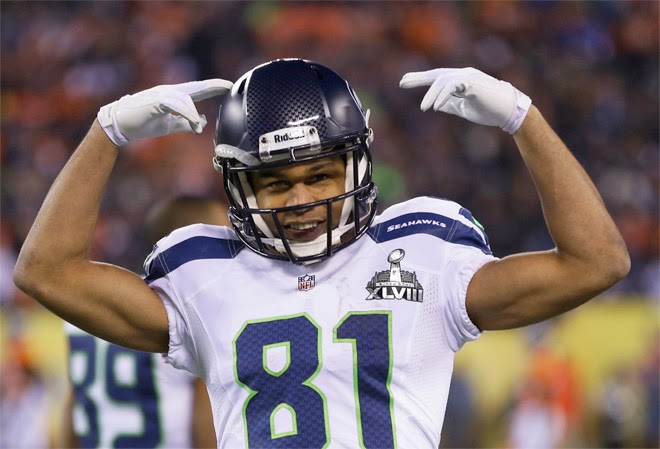 One of my favorite Seahawks Golden Tate has joined another team via free agency.  Golden Tate has signed a five year deal with the Detroit Lions.  Golden was Seattle's leading wide receiver, but even better, he was the team's "Dennis The Menace" seemingly always falling into some controversy.
The first time that he made news in Seattle, he was caught sneaking into a Top Pot Doughnut shop.  He proceeded to give the company advertising worth hundreds more than what he had taken. Then came the controversial catch to beat the Green Bay Packers on MNF.  ESPN analysts treated it like a national tragedy and the NFL knew they needed to bargain with the striking NFL officials.  There was the taunting of a defender during the Rams game, but after Terrell Owens taking out a pen and autographing a football in our stadium years ago, it was nice to see us doing the trash talk. Tate caught 64 passes for 898 yards last season, and scored 5 touchdowns.
I was also sorry to see guard Breno Giacomini leave, the former Seahawk tackle signed with the New York Jets.  His wife was a frequent customer at The UPS Store in Crossroads.  I got to meet Breno at the store a couple weeks ago and congratulate him on the Super Bowl win.

Back To The Trail

Spring weather and Daylight savings time allowed Dasher and I to return to the Lake Wilderness Trail after work for the first time this year. 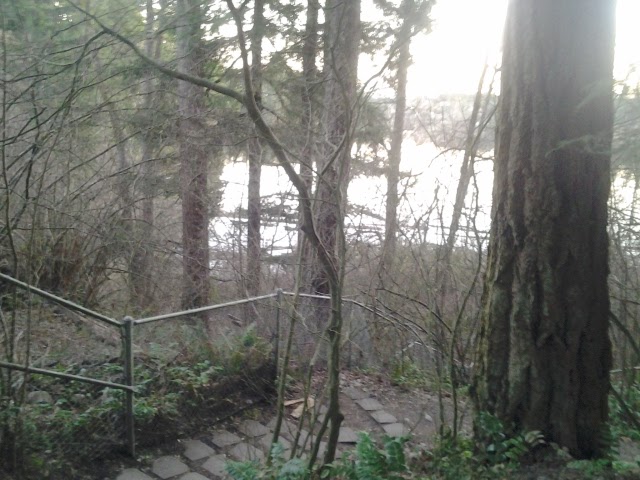 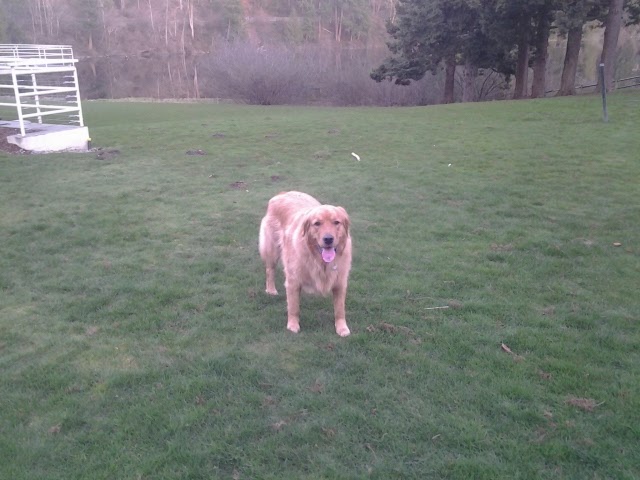 Burl Gets Lesson In Dog Behaviour

A while back, Cousin Burl Barer and Judy Faye, along with their dogs, were guests on the "Dog Whisperer" with Cesar Millan.
Posted by Mike Barer at 7:17 AM 0 comments

Michael Bennett Will Remain A Seahawk 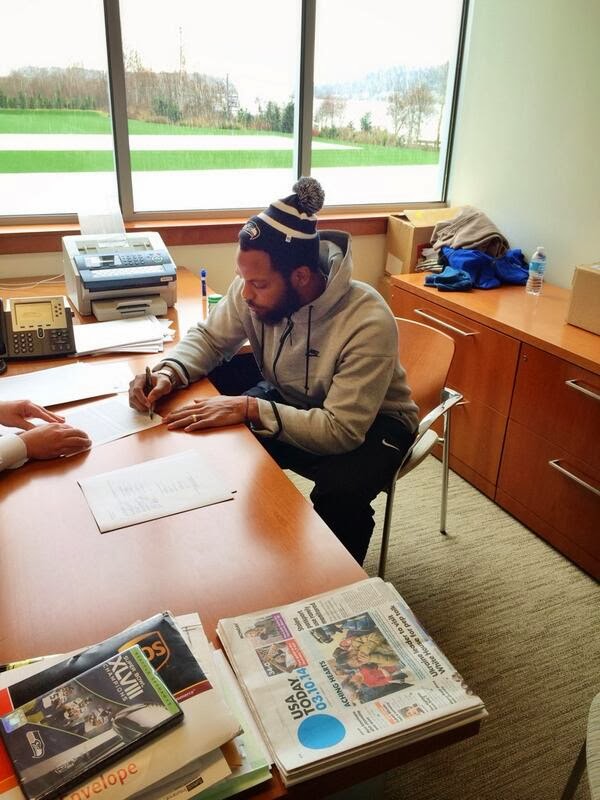 Stand-out defensive end Michael Bennett, who late last week indicated a desire to test the free agent waters, has resigned with the World Champion Seahawks  Keeping Bennett, who lead the team with 8 and a half  sacks was not cheap,  it is for 4 years and 28.5 million dollars with 16 million guaranteed.   The 'Hawks also released defensive end Red Bryant and wide receiver Sydney Rice to clear space under the salary cap.   Bennett is 28 years old and is 6'4, 274 pounds.
Posted by Mike Barer at 9:47 PM 0 comments

Stayin' Alive paid tribute to the late brother of Bee Gee Members Andy Gibb during the show Friday night at ShoWare Center in Kent.
Posted by Mike Barer at 10:58 AM 0 comments 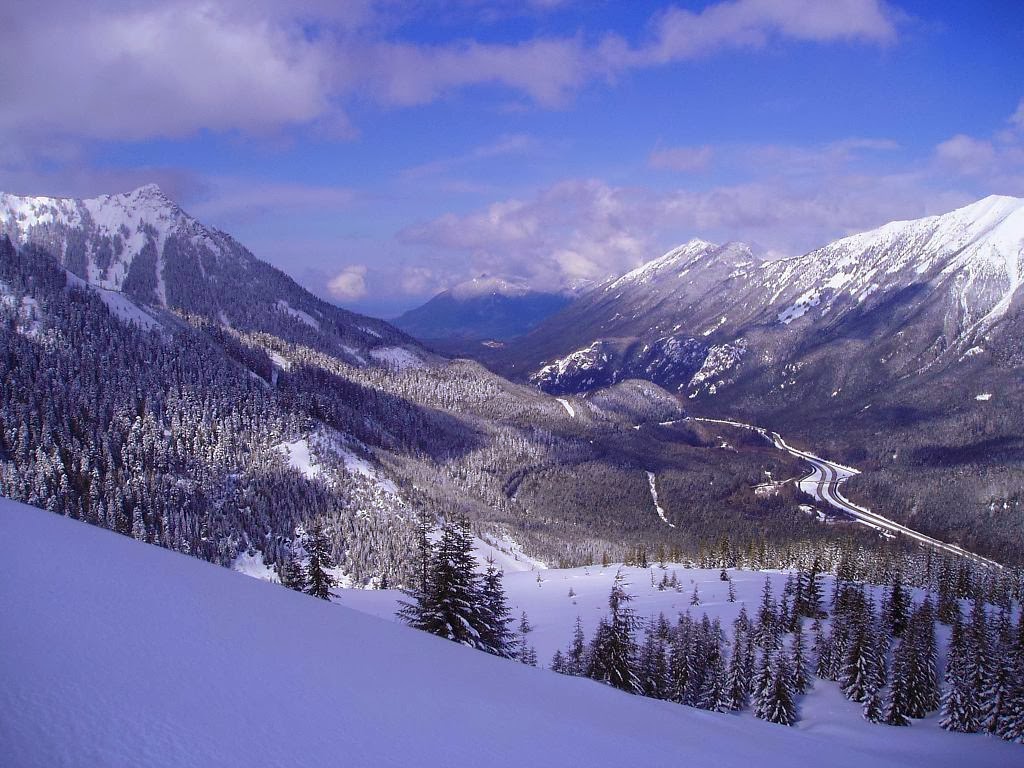 Democrats in Washington's 5th Legislative District will caucus Sunday March 9 2014, 1:00 pm at the Maple Valley Library, 21844SE 248th Street, Maple Valley 98038.  Delegates and alternates to go to the Democratic State Convention in Spokane this June will be chosen.   Be sure to watch your time, since daylight savings time begins tomorrow morning.
Posted by Mike Barer at 7:55 AM 0 comments

Deb and I watched the Bee Gee tribute band "Stayin' Alive" at the Showare Center in Kent. 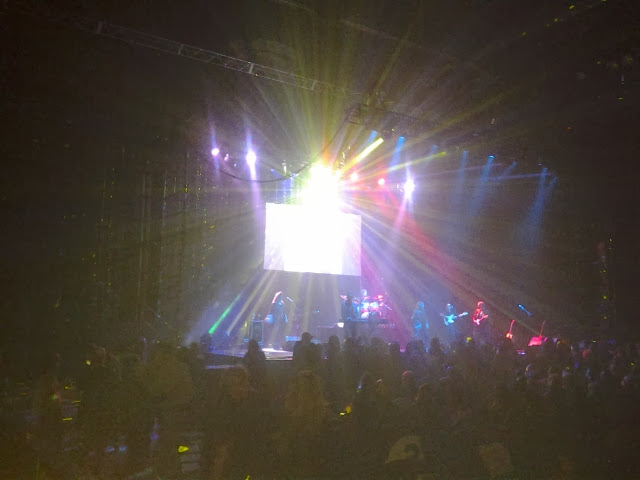 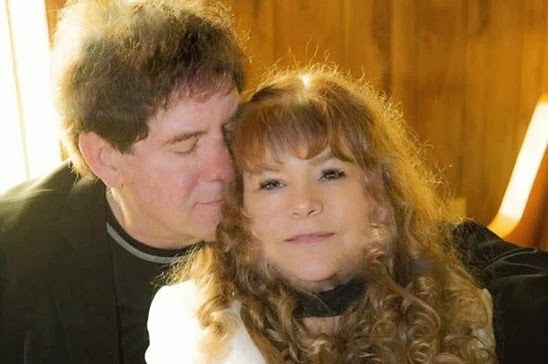 My remembrance post of Big Dan Murphy has generate a lot of traffic to this blog. I typed it up minutes after I learned of his passing, so I really couldn't provide much in the way of information. Dan and I had been facebook friends for years and I would bring him in on anything that had to do with local old Walla Walla radio or radio in general.
I can, I feel do one positive thing.  Dan was married just 5 months before his passing and his family has set up this web site, you can honor his memory by  clicking here.   A fund has been started for Big Dan Murphy at all Wells Fargo Banks.

Barers Of Maple Valley On TV

Deb and I were back again on New Day Northwest on KING 5 today (Monday March 3rd) once again with boxes, envelopes, bubblewrap and cards, but it was a stuffed golden retriever that stole the show.  Thank you Host Margaret Larson and Producer Su Ring. 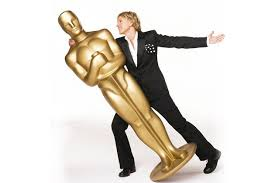 Deb and I will be on New Day Northwest on KING 5 TV tomorrow (Monday March 3rd).  The show will air at 11am PST.  Once again, we will talk about how you can do more than ship at your local The UPS Store. If you can not catch it, we will try to post the video here. 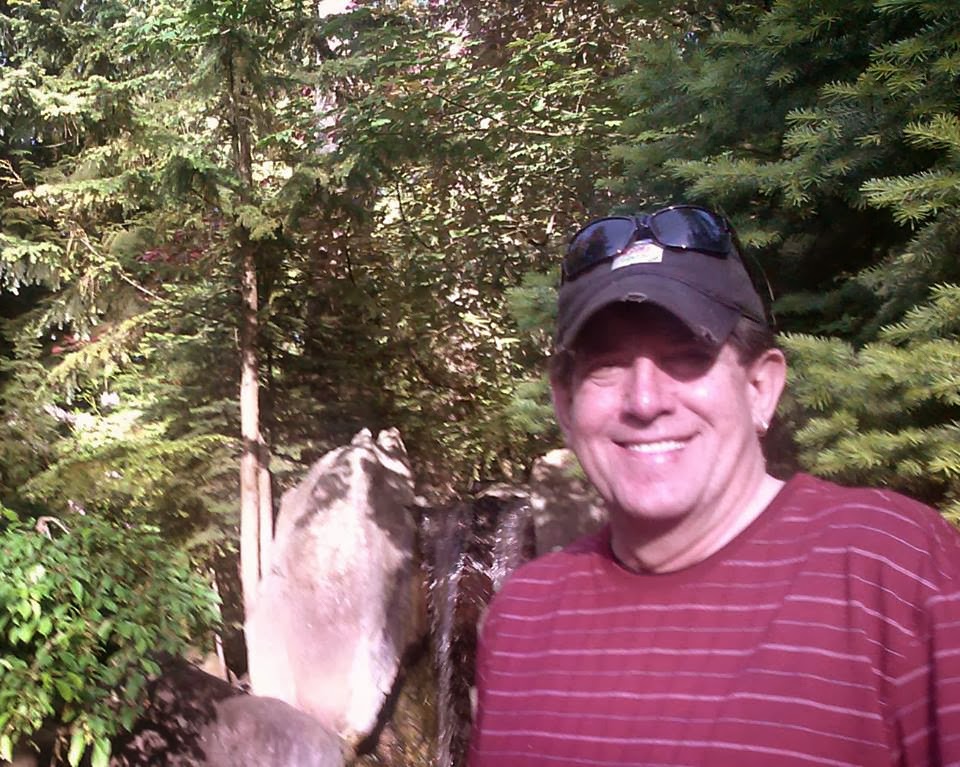 Big Dan Murphy, a Spokane radio personality has passed away.  Murphy, worked in Walla Walla for radio station KUJ using the name Wee Willie Winkle.  His next stop was Tri-Cities where he used the name Dancin' Dan Murphy.  I did not know him well, but he was a good friend of my brother, Danny.  The two had both appeared in the WWCC production of Arcenic And Old Lace.   Dan and I traded e-mails a while back after connecting on a radio history site.  I found this video of Dan on the air in Spokane, click here.
Posted by Mike Barer at 8:17 AM 0 comments