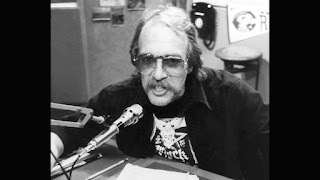 While the Cincinatti Bengals are off to the Super Bowl, there a sad story, involving a fictional TV Show set in the Ohio town. Sorry, it just isn't often that Cincinatti would come up in two posts in a row.

Howard Hesseman, who garnered fans playing the road weary, morning DJ, Dr Johnny Fever in the hit TV show, WKRP in Cincinatti, has died.  He was 81.

Hesseman's character, unique to TV at the time, played an often fired, self-effacing, morning drive radio personality, who in the series, had to look at his coffee cup to remember what stage name he was using.

As a radio fanatic myself, I felt like I could really identify with his character.