Memories Of The '60s--The Beatle Cartoon 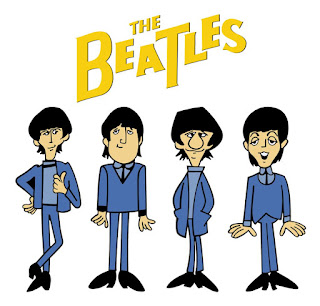 So most people my age may remember The Monkees TV show, but how many remember that The Beatles had a cartoon series.  It ran from 1965 to 1969 on ABC TV.   Reruns later ran on MTV in 1986.
The speaking voices of the 4 Beatles was provided by two voice actors.  The songs were real Beatles songs.  The band itself was not involved in the project, although their voices were used in the previously recorded music.
The show consisted around two episodes, each framed from a Beatles song. There was a "follow the bouncing ball" singalong in the middle.  The intro to each show played their music while the group was depicted running from it's crazy fans.  A phenomenon we know as Beatlemania, which was rampant at the time.
The Beatles were reportedly initially not fond of the TV show, but later came to like it.  The cartoon, I believe, went a long way toward cementing the band's place in American culture.  Most of the Beatles songs that I knew were the ones that I had heard on the cartoon.
The Beatles would eventually release the movie "Yellow Submarine" which was also animated.
Posted by Mike Barer at 6:32 AM

Email ThisBlogThis!Share to TwitterShare to FacebookShare to Pinterest
Labels: The Beatles, The Beatles Cartoon