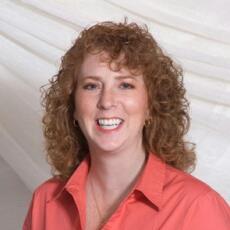 Sandi Sutton-Wasmund, A Maple Valley business women and community leader, lost her life as a result of a shooting on the Las Vegas strip.  Rapper Kenny Clutch was shot and killed in his Maserati, the car careened into a taxi in which Sutton-Wasmund was riding.  Taxi Driver Michael Bolden also lost his life in the crash.    Sutton-Wasmund was in Las Vegas to attend a trade show.
The suspect in the shooting, Ammar Harris was arrested today in Los Angeles.
A celebration of Sandi's life will be held on March 2nd at 2 at the Maple Valley Presbyterian Church.
Posted by Mike Barer at 11:05 PM 0 comments

The Sun Sets In Rancho Mirage 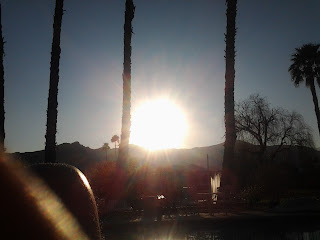 Ironically this picture was taken from the Sunrise Golf And Country Club in Rancho Mirage, where we were visiting family.  The Sun is tucking itself behind the mountain.
Posted by Mike Barer at 6:26 AM 0 comments

Welcome To The Hotel California 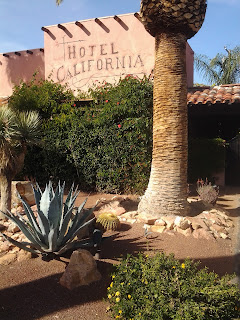 One of the most popular songs of all time, there actually is a Hotel California.  Actually, there are several in Southern California.  This one is located at 424 East Palm Canyon Drive in Palm Springs and is old world charming and romantic.  I'm hoping that we can stay there on one of our next vacations.
Posted by Mike Barer at 7:59 PM 0 comments

In LA on Oscar Night 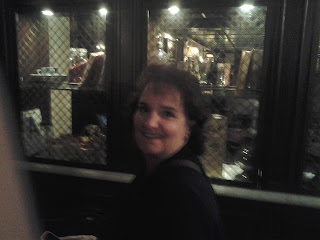 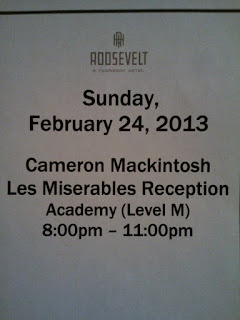 It is amazing how close you can get to the action during the Academy Awards presentation in Hollywood.  We arrived after the ceremony started and was able to get a parking place and walk down the Boulevard.  We walked into the historic Roosevelt Hotel where they were setting up a party for the cast and crew of Les Miserables.
Posted by Mike Barer at 7:41 PM 0 comments 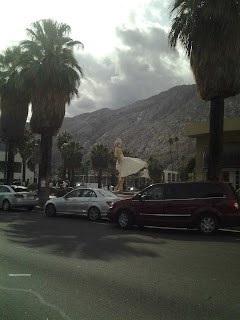 Love it or hate it, the first thing you notice upon arrival to Palm Springs is this 26 foot tall statue of Marilyn Monroe.  Known as "Forever Marilyn", this statue arrived in May of 2012 and depicts a famous sceene from the movie "Seven Year Itch".  The statue originally stood in Chicago.
Posted by Mike Barer at 6:59 AM 0 comments

We Visit "The Price Is Right" 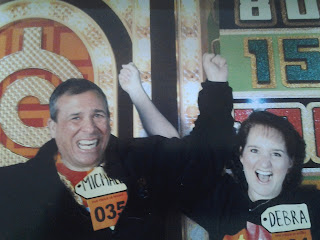 We were in the studio audience at a taping of the popular game show, "The Price Is Right".  We did not get to be contestants, however.  This picture was taken in the waiting area where we were asked to look like we had won a car.  We should however be visible in the audience when the show airs on April 10th.  I was wearing a green Seattle Sounders jersey in honor of host Drew Carey, who heads the ownership group that owns the Seattle Soccer club.
We will post more pictures from our trip to Los Angeles and the Palm Springs area soon.
If you ever want to be on the show, you can get priority tickets at the web site.  If you come with a group, it will increase your chance of being a contestant. Be sure to bring your enthusiasm.  It is better to plan a full day around being on set.  There is a process that you go through this different than other shows, because the contestants are picked on the fly.  The show is taped at CBS Television City
on the corner of Beverly and Fairfax in Los Angeles.
Posted by Mike Barer at 8:44 AM 0 comments 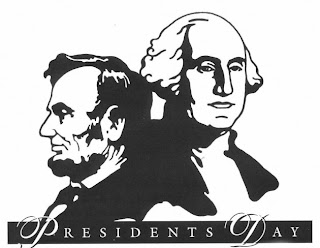 President's Day evolved from celebrating George Washington's birthday.  Our two greatest Presidents, at least according to most historians, were George Washington and Abraham Lincoln.  Both of them have birthdays in February.  George Washington, whose birthday is February 22nd, has always had his birthday marked with a federal holiday.  In 1971, it was moved to the third Monday of February as part of the Uniform Monday Holiday Act.  Because the date falls short of Washington's actual birthday, it was set up to also honor Lincoln, whose birthday is on February 12.
Posted by Mike Barer at 9:25 AM 0 comments 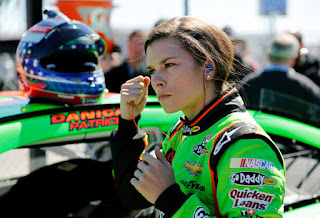 Danica Patrick earned pole position for this year's Daytona 500.  It marked the first victory for a woman in a sport dominated by men.  The 500, NASCAR's premier event, will be run Sunday.
Posted by Mike Barer at 9:46 PM 0 comments 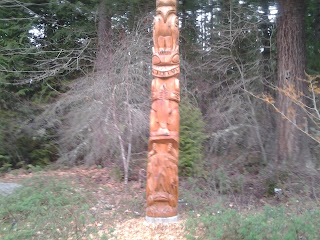 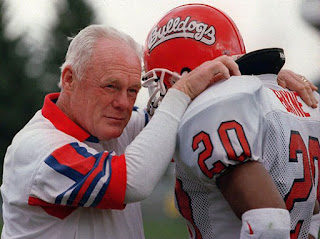 Cougar football fans were saddened by the recent passing of Jim Sweeney.  Sweeney was coach of the Washington State from 1968-1975.  He left the year before I came to school in '76.  Although his record at WSU was not great, he layed a foundation that lead to more successful teams in later years. Sweeney went to Fresno State and coach for a few seasons before going to the NFL.  He would return to Fresno State and coach for 17 seasons.  Sweeney was 83.
Posted by Mike Barer at 10:55 AM 1 comments 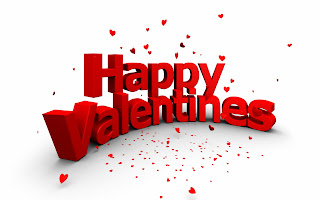 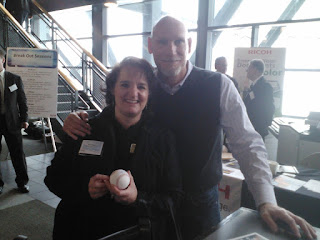 It's Deb's turn to pose with ex-Mariners at Safeco. Deb was there to attend a Ricoh Copier Seminar. Here's Jay Buhner.  The Mariner's trade with the New York Yankees worked so well in our favor, that the move was immortalized on Seinfeld.  The question is, how did Ken Phelps (the other end of the deal) feel about that?/
Posted by Mike Barer at 11:53 AM 0 comments

King Felix To Stay In Seattle 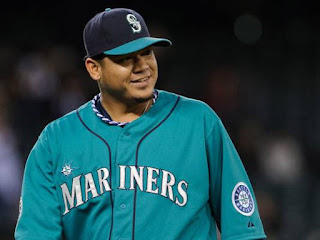 It seems like everything is finally on the right path in the Seattle Professional Sports scene.  The Seahawks were successful and had a great play off run.  The Sacramento Kings look like they will be relocating here to become the new Seattle Super Sonics and Felix Hernandez is reported to sign a $175 million  deal to remain with the M's for the next 7 years.
The deal will make Hernandez, a past Cy Young Award winner who last year pitched a perfect game, the highest paid pitcher in Major League Baseball history.
Of course, history shows King Felix to be a slow starter, even in his outstanding seasons.  Don't be alarmed if the King is not looking like the million dollar pitcher this April and May. 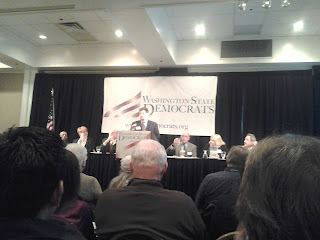 The Washington State Democratic Party held it's reorganization meeting this weekend in Olympia. Party Chair Dwight Pelz (sitting to the right of the speaker in picture) was reelected by acclamation.  Also reelected were Vice Chair Valerie Rongey, Rob Dolin (speaking in above picture) as Secretary, and Habib Habib as Treasurer.
The luncheon at the Olympia Red Lion, featured speaker Randy Dorn, Washington's Superintendent of Public Instruction, who lead a panel on the challenges of funding the state's public educations in light of limits put on the Legislature and the passage of an initiative allowing the creation of charter schools.
Pelz expressed his concern about Republican attempts to changing the way the President of The United States is elected.  House Bill 1091 which is currently debated in our legislature would have the electors alloted by totals in individual congressional district rather than state totals, if that proposal would have been in effect in 2012, Romney would have won the election by some 30 electoral votes.
Proving that the party was indeed a big tent, a couple of committee people came to the mike to show opposition to firearms legislation and defense cuts.
Posted by Mike Barer at 10:02 AM 0 comments 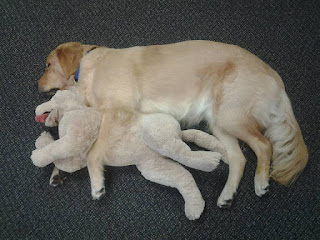 Dasher cuddles with his toy dog
Posted by Mike Barer at 8:12 AM 0 comments