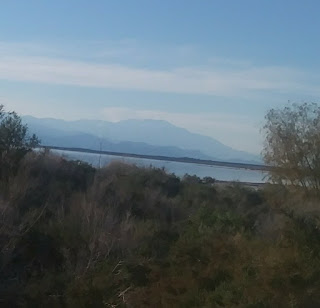 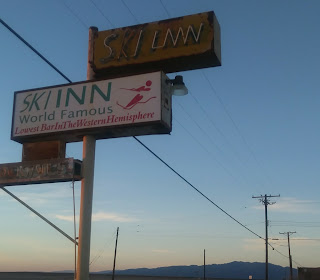 We had been coming to Palm Springs for well over a decade, but had yet to visit the Salton Sea until this year.  It is actually a salt lake, located on the San Andreas fault.  From a distance, it is very inviting, but when you get close, it is dirty and very dead, only limited species of marine life can live in the lake.
It was formed in the early 20th century when the Colorado River overflowed into an ancient lake bed.  We came to the almost deserted town of Bombay Beach.   At 223 feet below sea level, it is listed as the lowest community in the US.     We took this picture of the sign at the  town bar, oddly called the Ski Inn.  It bills itself as the lowest bar in the Western Hemisphere.
Posted by Mike Barer at 7:53 AM 0 comments 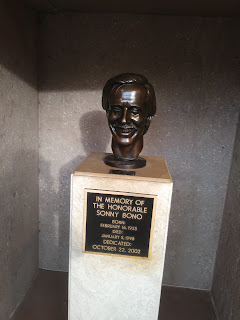 We have just returned from a three day trip to Palm Springs.  Our friends are somewhat irritated because this area is still amerced in one of the worst winters in memory.   Even Palm Springs itself suffered from uncharacteristic storms, but the weather was nice for our trip.
Above is the bust of Sonny Bono, who was the husband in the pop duo, Sonny And Cher, until they divorce in the mid 1970s.  The beautiful concourse of the Palm Springs Airport is named after him.  Bono went on be mayor of Palm Springs and eventually would serve in Congress.
Posted by Mike Barer at 7:41 AM 0 comments 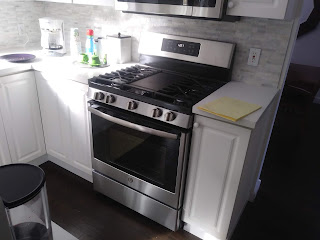 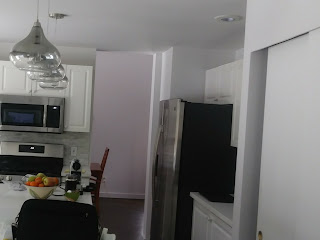 We upgraded our kitchen with a new gas oven and a refrigerator.  We have lived in our Maple Valley house now for 20 years, yet it now seems like a new home.  Thank you to Albert Lee Appliance and PMG.
Posted by Mike Barer at 8:15 AM 0 comments

In Honor Of Peter Tork 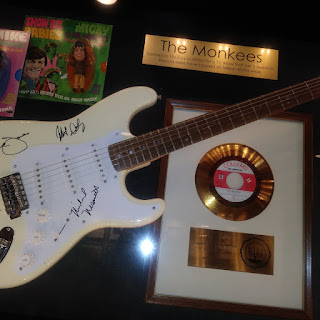 I was crazy about The Monkees when they broke out.  I was a huge Beatles fan, but about the time the Monkees TV show debuted, The Beatles were in something of a hiatus.
The Monkees were formed for a TV show, but I didn't care.  I was totally excited to get their first album.  Then their second.  I finally got "Headquarter", a birthday present.
The Monkees were a foursome like the Beatles, but could never compare.
I would take a short notice when the Monkees would tour, but had no desire to see them.  I was pretty much not a fan after the Beatle resumed releasing records.
I was saddened a few years ago to hear of the passing of Davy Jones and now Peter Tork is also gone.
I took this picture at the Hard Rock  Hotel And Casino in Stateline, Nevada.
Posted by Mike Barer at 11:42 AM 1 comments

Peter Tork Of The Monkees

Sources report that Peter Tork, the goofball bass player of the Monkees, a pop group put together for the iconic 1960s TV show has died.  He was 77 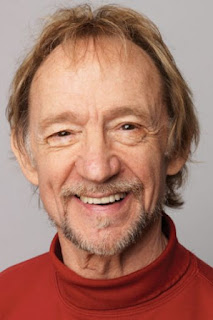 Email ThisBlogThis!Share to TwitterShare to FacebookShare to Pinterest
Labels: Peter Tork, The Monkees 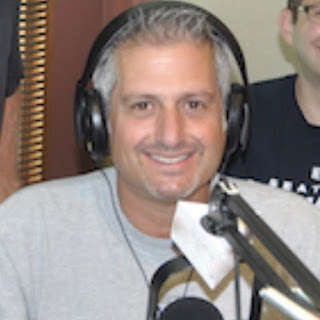 How do you know if a podcast is successful?  I don't know, but I have noticed the podcast by former KJR Sports Radio morning host Mitch Levy, Mitch Unfiltered is amazingly well produced, with sponsors like Bellevue Land Rover, Daniel's Broiler, and Zeek's Pizza.
With 2 episodes a week, usually lasting over an hour and a half, Levy has covered a lot of ground with analysis, nostalgia, and the style unique to his long running radio show.
As far as I know, this is an independent venture from Levy's living room, yet, the sound is professional.
A tip of the hat to Jason Hamilton, Levy's straight man, wing man, co-host on the venture.

Here is something you don't see everyday.  Tyler Lockett of the Seattle Seahawks plugging the Jewish summer camp Solomon Schechter.
Camp Solomon Schechter is located in Tumwater.  I attended in 1971 and again in '72.
Posted by Mike Barer at 8:10 AM 0 comments 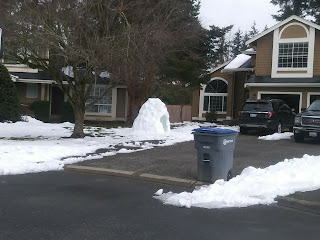 An abundance of snow and lack of school has spurred creativity in our neighborhood as the folks in one of our cul-de-sacs has fashioned an Igloo.  Snow has covered the area since the day of the Super Bowl.
Posted by Mike Barer at 10:43 PM 0 comments

The Drifters Make For A Fun Saturday Night 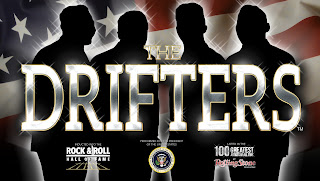 The Drifters, a legendary rhythm and blues band dating back to the early 50s, performed last night at the Northshore Performing Arts Center in Bothell.  Of course, this was not the band's original line up, but the concept of the group was carried forward as they entertained a crowd of all ages.
The band performed it's legendary hits, like "Up On The Roof", "Under The Boardwalk", and "Save The Last Dance", as well as pop standards like "Only You" and "(Sittin' On) The Dock Of The Bay".
Decked out smartly in tuxes, the band encouraged crowd participation, giving the mike to audience members to sing the chorus of "Under The Boardwalk" which they performed twice and inviting members on to the stage to dance on "The Twist".
Posted by Mike Barer at 12:22 PM 0 comments 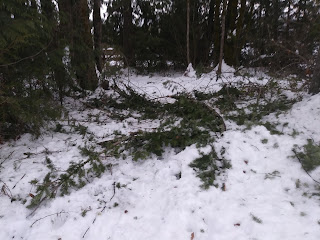 Excess snow has turned into ice. I took this picture of fallen branches that snapped off because of the weight of the ice on the trail behind Belmont Woods.  The streets have been plowed, but the pile up has made walking on sidewalks nearly impossible.
Posted by Mike Barer at 11:07 AM 0 comments 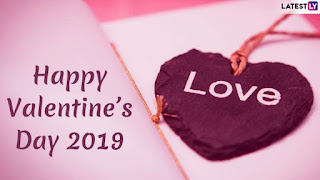 Lee Goldberg's follow up to "True Fiction" has just released and I can't wait to read it.  The book in it's many forms, is available here.
Posted by Mike Barer at 7:38 AM 0 comments 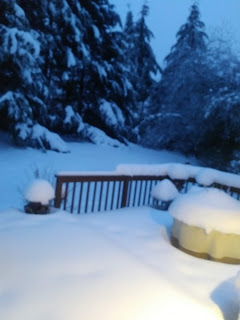 Snow continues to pile up after what has seemed to be a pretty mild winter.  This picture was taken outside our back door this morning. It's been with us for over a week and it's getting worst.
On an unrelated topic, thank you to Pugetsound.media blog for plugging two of the posts on this blog. Tracy Taylor's new podcast and Pat O'Day's Beatles feature.
Posted by Mike Barer at 7:43 AM 0 comments

Brandi Carlile - greatest singer of our time ! from Takashi Masusaki on Vimeo.
Posted by Mike Barer at 11:41 PM 0 comments 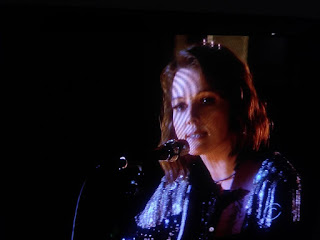 Maple Valley's Brandi Carlile won 3 Grammys in categories presented before the national telecast of the awards last night and  delivered, once again, a stirring performance of "The Joke" her anthem of hope to society's marginalized.
Carlile's performance, perhaps in front of her largest audience ever, rocked  the auditorium and lit up Twitter.
Carlile had been nominated in 6 categories, her wins were for Best Americana Album, best American Roots song, and best American roots performance. Her losses were in Record Of The Year, Song Of The Year, and Album Of The Year.  Her nominations alone in those categories were a major victory in her long career.
Carlile had just one nomination previous to this year's ceremony.  This was her first Grammy performance. 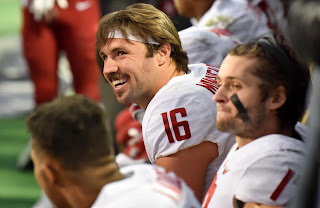 Gardner Minshew II grabbed the imagination of all Cougar fans as he led WSU to it's first 11 win season.  Now the graduate transfer quarterback from East Carolina has won Male Sports Star Of The Year at the MTR Western Sports Star Awards sponsored by the Seattle Sports Commission.  He is the first Cougar to win that award.
Minshew swept into Pullman like a new sheriff  in a western movie to lead a team rocked by the tragic death of quarterback starter apparent Tyler Hilinski after the previous season. His mustache inspired fans (both men and women) to wear fake mustaches.
Briana Stewart of the WNBA champion Seattle Storm was honored with Best Female Sports Star. 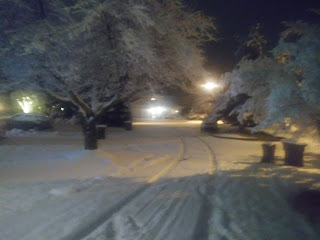 The UPS  Store in Crossroads closed early yesterday as a heavy snowfall dumped on the Puget Sound region. I was on the road by three.  It took about 45 minutes to get out of Bellevue and on to I-90. I-90 was a breeze to Issaquah, then spent about one hour on the exit to Front Street.
It was another hour to get  home as Issaquah-Hobart Road and Cedar Grove Road were very slippery. I was finally home at 7pm.
Today, the area continues to be blanketed with snow. 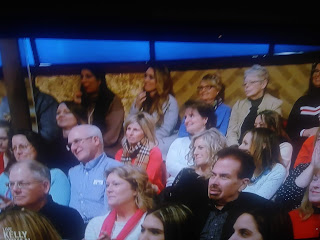 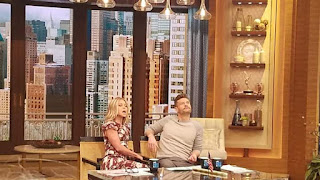 My wife (top picture 2nd row down 3rd from left) and friends went to New York this weekend and got to be in the studio audience at the Live With Kelly and Ryan talk show.  The morning show features Kelly Ripa and Ryan Seacrest (bottom picture), along with celebrity guests.  This show featured Donny Wahlberg and Kate Walsh.
Posted by Mike Barer at 9:42 PM 0 comments

Baltimore Orioles legend Frank Robinson has died.  Robinson won baseball's triple crown in 1966 and was Major Leagues first African American Manager when he was hired by the Cleveland Indians. 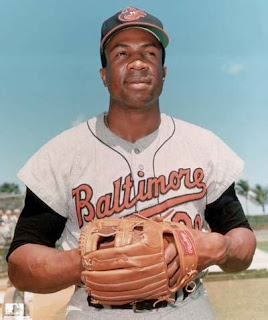 'First Beatles Record Ever Aired in USA was in Seattle!' Legendary North...

According to Pat O'Day, Beatlemania started here in the Seattle area.
Posted by Mike Barer at 6:59 AM 0 comments 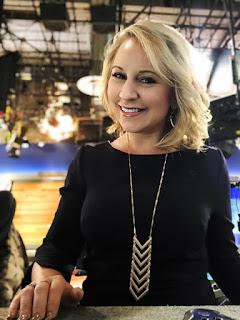 Tracy Taylor, the Seattle area traffic reporter for KIRO 7 (weekday mornings) and KIRO FM (weekday afternoons), now has a podcast.  She will talk about traffic news throughout the area along with some human interest stories.  To listen, you can subscribe at iTunes or click here.
Posted by Mike Barer at 8:18 AM 0 comments 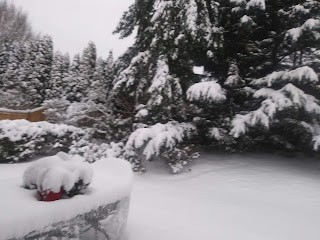 It began snowing in the area last night and by this morning, our backyard was completely covered.
Schools in the area are closed perhaps easing the commute.  I have a regularly scheduled day off so I  haven't driven anywhere, yet.  Snow effects travel times in this region much more seriously than an other places.
This picture was taken in our backyard around 7:30 this morning. 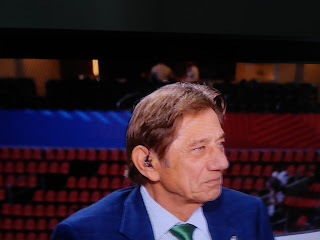 After the first two Super Bowls, it was widely thought that the NFL was vastly superior to what was then the AFL.  In 1969, even though the NFL's Baltimore Colts were favored over the AFL's New York Jets, Quarterback Joe Namath guaranteed a Jets victory.   The Jets would shock the country with a 16-7 victory over the Colts.  It's widely though that this meant the AFL had arrived.  It's  said to have spurred on the merger that brought the AFL teams into the NFL.
Since that game was 50 years ago, CBS paid tribute to Namath in it's pregame coverage of this year's Super Bowl. 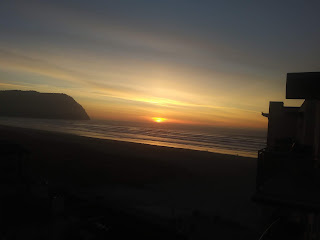 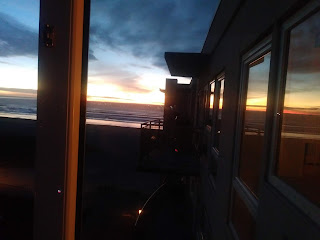 Even summer days in Seaside can be cloudy and cold, but during our winter visit last week, it was sunny and warm.  We were able to watch two spectacular sunsets.  In the bottom picture, the reflection of the sun off the window makes a great effect.
Posted by Mike Barer at 9:31 AM 0 comments 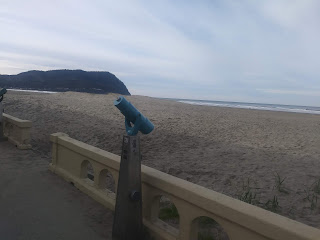 One thing I can still find in Seaside since I started visiting as a child are the telescopes along the Prom. I don't think about them or use them that much, but I sure would miss them if they were gone. 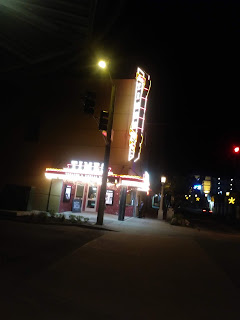 After sitting empty for almost 30 years, The Times in Seaside, Oregon has reopened as a brewpub and a single screen theatre (remember those).
The theatre, in the heart of the town, closed in 1989, giving way to a multiplex theatre on the highway. The Times turned into a "white elephant", empty for an entire generation.
The theatre is run by the owners of two area restaurants.  It shows second run features for $5, 3.50 for children and $4 for military and seniors.   It also shows live NFL football and other sporting events. The menu is basic sports bar cuisine along with beers that are brewed onsite.
Deb and I watched the movie Instant Family at the theatre last Sunday.
Posted by Mike Barer at 7:00 AM 0 comments