Kicking And Dreaming--The Story Of Heart 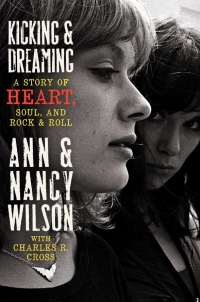 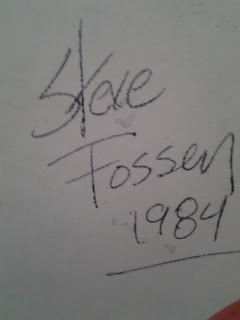 I first heard the group Heart when the song "Crazy On You" was played on the local rock radio station on the night of my high school graduation in Walla Walla.  Although it was on just a silly AM car radio, something really came through, a special kind of charisma that is heard to put into words.   That summer (1976),  I saw them again on the WSU public TV channel, the show was called Second Ending and the true talent of the group came across including Ann Wilson's ability to connect with the audience, I don't think the Second Ending was ever again able to live up to that episode. Ironically, I saw Heart perform live in concert at the University Of Idaho down the road from WSU in 1978.  Bottom picture is Heart's first album, autographed by it's bass player Steve Fossen, who I met at a Seattle after hours party.
"Kicking And Dreaming" is the latest book from Charles Cross, who has written about almost every iconic Rock act to come out of the Seattle area.  The story is actually told by  Ann and Nancy Wilson, the sisters who fronted the group.
Without giving away too much of the book before you read it, the Wilson sister were raised in a military family and moved many times, finding it difficult to make friends, the sister stuck together as a family, perhaps it was a positive for the act that they were unable to assimilate, that they would be able to carve out a niche of their own.
The family finally settled in Bellevue and Ann was a high school outcast because of her weight issues. The girls were inspired by the Beatles.  They started performing as teenagers, when they played at their family's church, they played a rock song that emptied the congregation, much like John Lennon's famous spoken faux pas.
The book chronicles the band's meteoric rise, their sudden fall, and how they were able to pick themselves back up and still today, be an act to be reckoned with.  Not always a happy story, they speak about gender discrimination by groups like the Marshal Tucker Band who pulled the plug on them while they were performing as a warm up band and heartache from broken love affairs and school rejection.  Nancy also speaks candidly about hear divorce from Cameron Crowe.
My cousin Burl Barer was listed in the acknowledgements as a contributor to the book as was my old boss Pat O'Day.
Posted by Mike Barer at 10:59 PM 0 comments

The UPS Store Featured on TV

My wife Debra and Karl Kilpatrick, who owns a UPS Store in Puyallup demonstrate packing techniques of The UPS Store on KING 5's New Day Northwest with Margaret Larson. I can be seen in the audience. Deb and I brought a wide array of packing boxes from the store to the studio for the demonstration.  We were at the studio for about an hour before to set up.  While waiting in the Green Room, we met some of the other guests including a group from Northwest Harvest, the president of Bartell Drugs, and a personal trainer.
Posted by Mike Barer at 12:29 PM 0 comments

Debra Back On TV

My wife Debra will be back on TV again tomorrow (Wednesday, November 28th) on KING 5 TV to talk about packing and shipping options for the holidays at The UPS Stores in the Seattle area.  She will be on at 11 am on Channel 5 on the show New Day Northwest.  Margaret Larson will be the host.  Unlike a year and a half when she was on she was interviewed at the store by Penny Legate on Better Northwest, she will be live in the studio.
For those who may miss the showing, I will try to get a video up soon. 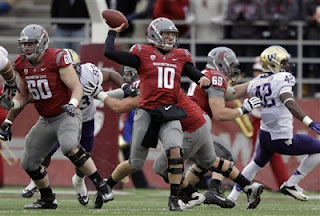 WSU quarterback Jeff Tuell passed for 350 yards as the Cougars overcame an 18 point deficit to stun the bowl bound Washington Huskies 31-28.  The Cougars, in the midst of a nightmare season seemed to be on the way to a 9th straight loss, when they scored 18 straight points to send the game into overtime.  Andrew Furney hit a 27 yard field goal to end the game.
Because of the tradition of the Apple Cup pitting the state's two largest universities, the Cougars end the season on a somewhat happy note in spite of a 3-9 record.  This season, the first under coach Mike Leach, who turned into a polarizing figure with some of his methods of handling players. 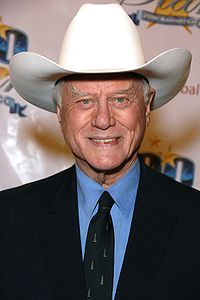 Larry Hagman, whose iconic character, JR Ewing, invoked everything people dispise about the Texas oil industry, is dead at 81.He had been suffering from cancer.   Hagman originally played astronaut Tony Nelson in the comedy, I Dream Of Jeanie.
Hagman's mother was broadway legend Mary Martin.  Hagman had recently been starring in a revival of the Dallas series, with most of the original actors, but featuring the rise of  the next generation of Ewings.  Ironically, Hagman's TV brother, Bobby is depicted in the show as suffering from terminal cancer.
Posted by Mike Barer at 11:28 PM 0 comments 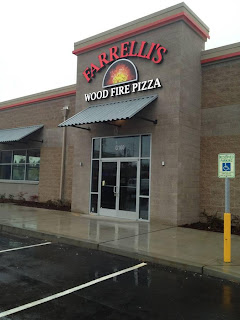 Farrelli's Wood Fire Pizza opened in Maple Valley on October 31st of this year.  It is a family fun restaurant located by the Fred Meyer at 26642 Maple Valley Black Diamond Rd. SE.  We stopped over for dinner last Saturday and sat in the bar.  Our food server was named Nic, he was well versed on the history of the chain, it was started by the Farrell family in Lacey (near Olympia), there are also locations in Parkland, Tacoma, Dupont, and Sumner The Maple Valley location is the 6th of the chain and the first in King County. We ordered beer from a vast selection that included local micro brews and wines.  Diners can pick one of the Restaurant specialties or create a pizza of their own from the multitude of toppings. Although the place was busy, the food arrived right on time.
I would highly recommend Farrelli's in Maple Valley.
Posted by Mike Barer at 9:42 PM 0 comments

Breakfast At The Testy Chef 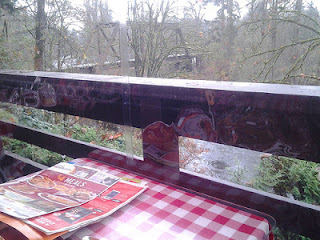 The Testy Chef on the off highway 169 is worth visiting,  breakfast on the deck offers a breathtaking view of the Cedar River.  The food and service are excellent and affordable.  It is a wonderful break from fast food and one of the last remaining establishments that give Maple Valley it's rural character.
Posted by Mike Barer at 9:40 AM 0 comments 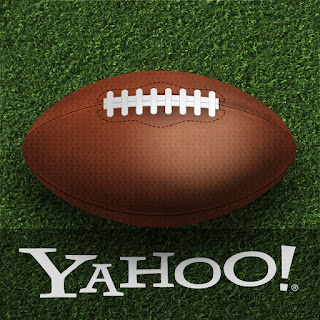 As you may know, I have participated in fantasy football leagues for a few years.  This year, my team has been pretty successful riding the coattails of Green Bay star quarterback Aaron Rodgers.  Realizing that this last weekend , Green Bay was having a bye, I went to the computer to make some last minute changes before the game.  I noticed that the site was difficult to navigate, thinking it was a computer glitch, I went to my phone with no luck.  I soon got a text from another player and I knew the problem with with the Yahoo site.
Sure enough, the next day, I  received a letter of apology from Yahoo, I assume all the players did, that the site did indeed have an outage.   Possibly players from all over the world trying to find a suitable replacement for Aaron Rodgers.
Posted by Mike Barer at 8:53 PM 0 comments 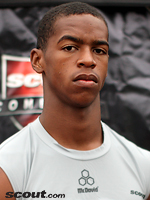 When WSU hired Mike Leach as head football coach last year, the school  was hoping to put the program on the national "map".  It now is, but definitely, not the way it wants to be.  Premier wide receiver Marquess Wilson has left the team and shocked the sports world with accusations of "physical, emotional, and verbal abuse".  Reporters were already aware of how Leach handled a loss to Utah, marching selected players into a news conference to explain what he perceived as a lack of effort.  Cougar fans are questioning whether there is a method to the coach's madness or it it just madness.  WSU President Floyd has announced an investigation into Wilson's charges.  WSU football fans have seen their share of unusual coaches, but none as polarizing as Coach Leach.  Time will tell if he is the right player to turn the program around.
Posted by Mike Barer at 6:20 AM 1 comments 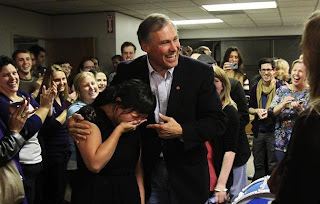 The 2012 Election cycle for Washington State has all but come to an end as Attorney General Rob McKenna has conceded to Jay Inslee in the state gubernatorial race.  Inslee becomes Washington's 23rd Governor. 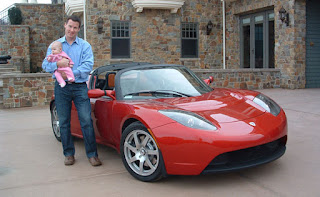 Issaquah City Councilman Mark Mullet has been a elected to the state senate, he becomes the first Democrat to represent Washington's 5th Legislative district in 20 years. Mullet, a former Bank Of America executive, is owner of  Zeke's Pizza and Ben And Jerry's Ice Cream franchises in the Issaquah Highlands.  He was written about in the Seattle Times a few years ago for being the first Washington resident to purchase a Tesla, an all electric car.
Posted by Mike Barer at 12:36 PM 0 comments

The President Meets Some Barers 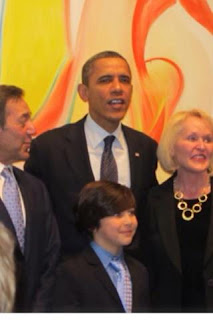 Cousins Stan, Alta, and Aaron Barer pose with President Obama.  Thank you to Anea for posting this on the "Barer" Facebook page.
Posted by Mike Barer at 6:13 AM 1 comments 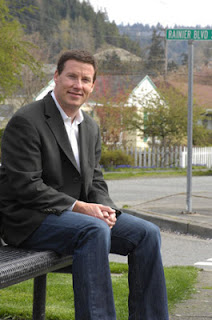 Mark Mullet is the right choice for State Senator from Washington's 5th Legislative District.  Mark is a small business owner and an Issaquah City Councilman who bill himself as a fiscal Conservative and a social Liberal, those qualities define the make up of the 5th District.  Mark has an across the board apeal that can potentially bring together all sides.  Mark's opponent Brad Toft comes across as an ideologue with no experience of bringing sides together.  He was flung into the process when incumbent Cheryl Pflug left the Senate after taking a job with the State Growth Management Board,  anger by district Republicans at Pflug's sudden departure from the race hardly cannot be seen as confidence in Toft's ability to serve in that position.
Posted by Mike Barer at 9:40 AM 0 comments 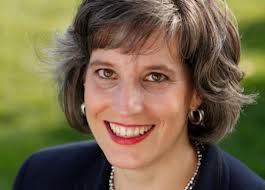 Laura Ruderman, former legislator from Washington's 45th district has been heard on Robo calls endorsing Bill Finkbeiner for Lieutenant Governor.  Ruderman is known as a staunch Democrat.  Finkbeiner was once elected to the state house in the 45th in '92 as a Democrat, but switched to the Republican party a couple years later in a run for senate, allowing Finkbeiner's Republican opponent in '92, Dr Backlund to regain his seat.  Ruderman defeated Backlund a few years later.
Imcumbent Lt Governor Brad Owens is considered by some a Democrat in name only (Dino).  Many Republicans and Democrats think of Finkbeiner as a Republican in name only (Rino).  In spite of the low profile of the office, the Lt Governor has real power.  He presides over the State Senate and can vote in case of a tie.  He also assumes the governor's position when he/she is out of state.
Posted by Mike Barer at 8:02 AM 0 comments 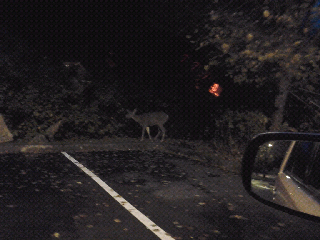 I stopped to make a phone call last Monday in Issaquah and found this creature feasting on the greenery.
Posted by Mike Barer at 10:34 PM 0 comments