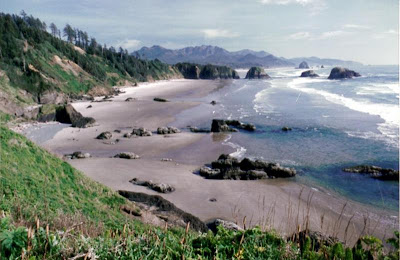 Seaside, Oregon is a family tradition going back decades. While the city has the arcades and a carnival atmosphere, nearby Ecola State Park (Above) shows unparalelled natural beauty.
Posted by Mike Barer at 10:51 PM 0 comments

Pictures Are Trickling In! 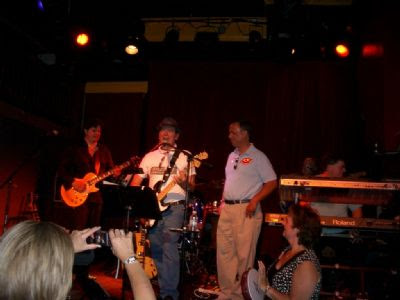 I'm starting to get some pictures from my surprise 50th party. I'm in the blue shirt on the right up on stage with the band, who I am proud to say did an incredible job, even after I decided to join them. My wife has the tambourine on my right. I'll be posting more pictures as they come in.

My Dad has been writing a series on his blog about struggles of our family through the long illness that my Mother suffered from 1970 until her death in 1997. What my Dad leaves out is how both of them kept an even keel, no sign of panic, almost to the point where we did not even grasp how serious the matter was. It is amazing looking back at my Father's life at that time. In addition to my Mother, my Grandmother Barer had a then little known disease called Alzheimer's that was progressing rapidly. My Dad's Uncle Dave, who was his business partner, was having heart problems. On top of that, my sister and I were going through the turbulence of adolescence. Oh, and did I mention my 2 little brothers?
Posted by Mike Barer at 9:55 PM 0 comments 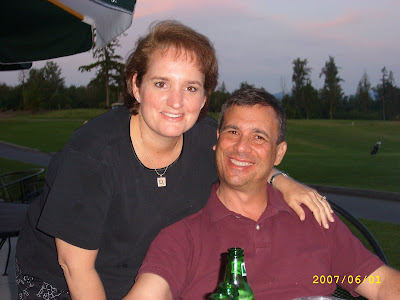 Right outside of Maple Valley, the Firecreek Grill at the Druids Glen Golf Course is a great place for an early summer evening's dinner. You can see Mount Rainier in the background.

A Great Time Was Had By All 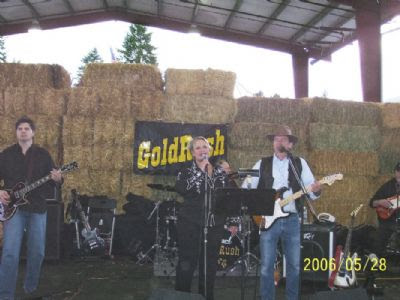 I celebrated one half century of life this past Saturday at a surprise bash at Doc Maynard's in
Pioneer Square, Downtown Seatttle. I hope to have pictures up soon but for now, I'll let my brother Steve give you the lowdown. The above picture was not taken at the party, but was the band that played there.
Posted by Mike Barer at 10:59 PM 2 comments

More Of My Dad's Writing

My Dad continues to write his touching memoir about my Mom and her illness
Posted by Mike Barer at 11:04 PM 0 comments

Brandi Carlile --From The Rafters 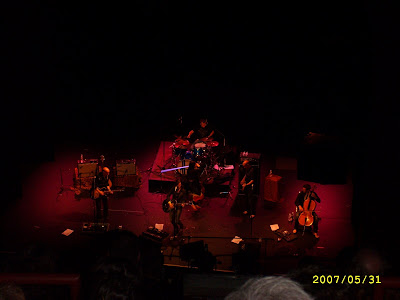 We were not close enough to get a good picture at Brandi's June 1st concert, but it was fun just the same. Brandi returns to Seattle on November 2nd when she plays the Paramount.

Rodney Tom Will Run For Congress 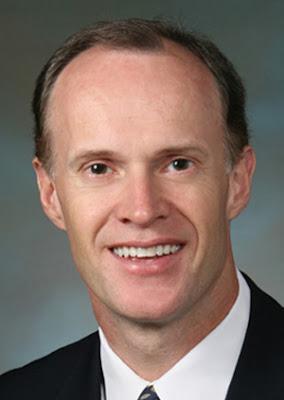 Believe it or not, before 1994, Washington's 4th and 5th Congressional District of Yakima and Spokane, respectively, sent Democratic representatives to Congress, not so for our 8th Congressional District. Since it's creation in 1990, this moderate Suburban Seattle district has only been represented by Republicans. Somehow, Rod Chandler, Jennifer Dunn, and now Sheriff Dave Reichert have shown at least the appearance of being bi-partisan. By that token, Rodney Tom is jumping into the race. Tom was a moderate Republican in the State House of Representatives, who jumped across the aisle and ran for State Senate as a Democrat, beating more strident Republican Luke Esser. Tom will now challenge Darcy Burner for the Democratic nomination. Burner last year, narrowly lost to Reichert. Tom thinks he can bring some of his supporters from campaigns past along with Democrats who think that Burner did not adequitely answer Republican charges of being too inexperienced in the public sector or who may be uncomfortable with some of her more Liberal views. I believe that the 8th Congressional District is the only one to have one party represent it thought it's entire existence (Seattle's 7th had Republican Jack Cunningham elected in a special election to replace Brock Adams in 1977), hopefully that little quirk will be changed in the next election cycle.
Posted by Mike Barer at 4:08 PM 0 comments

Ichiro is MVP At All Star Game 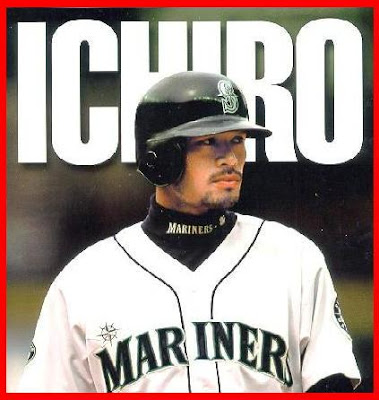 Our own Ichiro made history as he hit the first inside the park home run in All Star game history. That feat helped him win this year's game MVP award. It turned out to be the deciding blow as the American League beat the National League 5-4 in the Midsummer Classic. The game was played in San Francisco's AT&T Park. In addition the Mariners are said to be ready to sign Ichiro to a five year contract.

NBA Leaving Seattle--Closer Than You Think!

A front page story in the current Puget Sound Business Journal refutes the myth that the NBA may not want to leave the large Seattle market for much smaller Oklahoma City. The article says "two reports about the New Orleans Hornet--who played at the Ford Center in Oklahoma City for two NBA seasons after Hurricane Katrina badly damaged New Orleans Arena--suggest that the city's financial differences with Seattle aren't all that great."
The story suggest that the team, who probably would not be called the "Sonics" , would benefit by being a the one "horse" town. Observe the San Antonio Spurs. Remember a few years ago no one thought the Los Angeles Rams would leave to go to St Louis, and they had already lost an NFL team. They not only moved, but brought the town a Superbowl Trophy. That scenario could easily play out with the Super Sonics who benefit now with what could be the most exciting player to hit the NBA since Jordan in Kevin Durrant.
If you are a Sonics fan, the time to act is now. Write your legislator and ask what he/she could do to keep the Sonics and the Storm in Seattle. If they get a groundswell of support, they will have to act. Last Saturday's Seattle Times had a front page article saying tourist spent upwards 4 billion dollars in the Seattle area. Couldn't some of that money be tapped toward a new arena? Remember, Seattle's only professional sports championships are with the Sonics and Storm. Google the Washington State Legislature, I did. I wrote.
Posted by Mike Barer at 10:22 PM 1 comments

Ken Levine, the brilliant TV comedy writer who moonlighted in the early 90s as a Mariner play by play announcer will return on a fill in basis during the Mariner series against the Tigers next weekend.
Levine was added to Mariner team ironically when Rick Rizzs left for a short time to join the Tigers broadcast team. When veteran Tiger broadcaster Ernie Harwell returned, Rizzs returned to the Mariners.
Posted by Mike Barer at 4:07 PM 0 comments

My brother Steve Barer has a hard hitting editorial on the murder suicide of Chris Benoit.
Posted by Mike Barer at 10:53 PM 0 comments 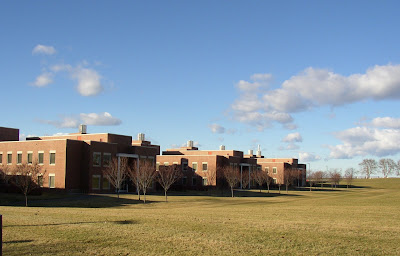 Last weekend I headed to Richland Washington to meet with fellow members of the Washington State Democratic Central Committee. Most of us stayed at the Richland Red Lion on the main drag named George Washington Way.
The Tri Cities bring back plenty of memories. When I grew up in Walla Walla, the Tri Cities of Richland, Pasco, And Kennewick were the closest ties thing to civilization. They had TV stations, rock radio, a huge mall, and all the national chains of restaurants. That was considered good back then.
On Friday nights at a political event, there are usually "Hospitality Suites" hosted by various interest groups. This one was no exception although there were only 4 that I know of.
George Fearing For Congress hosted one which was far from all of the others. That actually was a suite the opened up to the courtyard. Also hosting suites were Stonewall Democrats, Primary Democrats, and Black Caucus. My favorite was Black Caucus, even though it did not serve alcohol. The food was good and the discussion was lively.
Many Seattle area Democrats do not really care to travel to Eastern Washington. The attendance was less than spectacular and some of the smaller meetings were cancelled. I travelled down to Walla Walla and saw my brother Steve and his girlfriend, and still made it back to Pasco in time for lunch.
The meeting was called to order shortly after 1:00 that afternoon. It was short and I was able to make it back to Maple Valley by late evening.
Posted by Mike Barer at 10:30 PM 2 comments

A Salute To Larry Doby 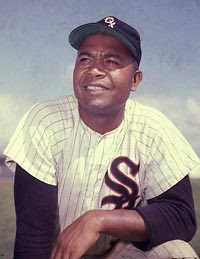 6o years ago, Larry Doby became the first black man to play in the American League and the second black man to play in Major League Baseball. He is much lesser known than Jackie Robinson, but no doubt carried many of the same burdens.
Posted by Mike Barer at 11:01 AM 0 comments

Have A Safe And Happy 4th Of July 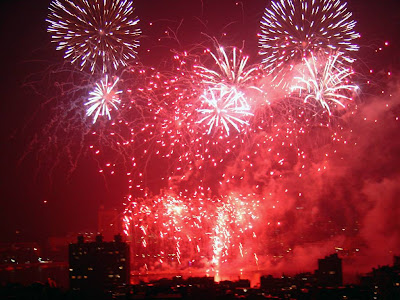 Clay Bennett has is starting to put his own stamp on the Seattle Super Sonics. He has fired the coach, picked a General manager from his part of the country in Sam Presti, and finally demoted Lenny Wilkens and fired team announcer David Locke. Star guard Ray Allen was traded on draft day to the Boston Celtics. It is clear that Bennett wants a fresh start. It is also clear he is pulling up anchor on any ties to Seattle. If the Sonics are to stay in Seattle, fans are going to have to act fast. We need to remember that at this time the Sonics and the Storm are the only professional teams to have won championships in their respective leagues and now we run the risk of losing both of them.
Posted by Mike Barer at 10:28 PM 0 comments

It was only a few years ago that KVI ruled the airwaves, Tim Eyman's initiatives always passed and the Seattle Times ran a column by ultra right journalist Michelle Malkin. Mike Webb was a Liberal talk show host on KIRO. I was happy at the time to finally hear a talk radio host who's views were somewhat similar to mine. Webb had the fire of an Ann Coulter or a Rush Limbaugh, but presented the Liberal side.
One day I was listening to Mike's show and he presented an Anti-Israel attack. I sent him an e-mail stating that I disagreed with his views. I was shocked that within minutes he sent me a very harsh strongly worded e-mail stating his disagreement. This was surprising considering I had sent e-mails to John Carlson and others who were clearly on the right and they generally sent letters back that respectfully disagreed with me. I wrote back to Mike and he sent an even stronger profanity laced e-mail. Such was Mike Webb.
A year or so ago, Webb got caught up in accusations of insurance fraud. Michael Hood's radio oriented Blatherwatch, reported Webb's outbursts in court and on the way to court. Webb was eventually fired from KIRO. This last week Mike Webb was found murdered in a crawl space under his house in the Queen Anne district of Seattle. Mike Webb was a very complicated man. It is sad to see things end the way they did.
Posted by Mike Barer at 9:22 PM 0 comments 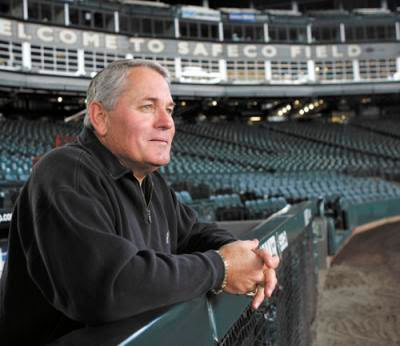