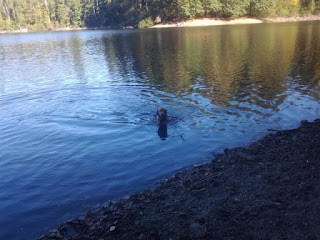 Dasher enjoys a refreshing swim as we finish our walk around the lake at Nolte State Park, near the Green River Gorge. This is our third visit to the former resort, on the last day that it will be open this season.  We discovered the park 3 years ago, when we went on a drive to look at the autumn leaves.  The park is just 8 miles from Maple Valley.
Posted by Mike Barer at 10:02 PM 0 comments 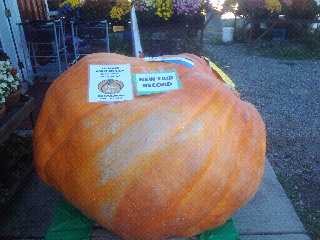 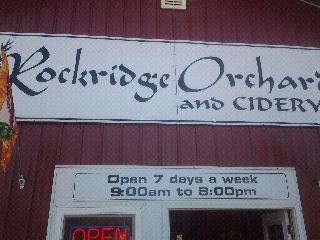 This pumpkin in front of the Rockridge Orchards  Market near Enumclaw weighs 1246 pounds according to the sign and won first prize at this year's Puyallup Fair.  Deb and I were on a Sunday Fall drive to Nolte Park and made our annual stop at the country store at 40709 264th Ave SE in Enumclaw.
Posted by Mike Barer at 7:00 PM 0 comments 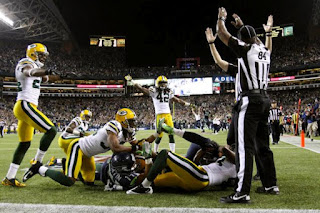 The Seattle Seahawks were not looking for controversy, they wanted to win a game in front of a Monday Night Football national audience.  The Seattle Seahawks beat one of the NFL's premier teams for the second week in a row by virtue of one  of the most controversial calls in league history. Noboby will remember the Seahawks' 8 sacks in the first half.  The Packers adjusted their offense in the second half and clearly gained control of the game.  In shades of the loss to the Cardinals in the first game of the season, Quarterback Russell Wilson could not put the ball into the endzone.  After turning the ball over, our defense came alive and made held Green Bay deep in it's own territory.  After what looked like another failure by the Hawks, Wilson found Golden Tate in the endzone and the rest is history.  Seattle 14  Green Bay 12.
Posted by Mike Barer at 6:53 AM 0 comments 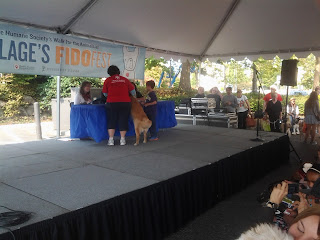 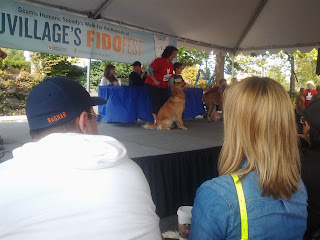 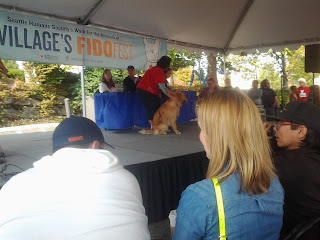 For the third year in a row, we entered a dog in the University Village Fido Fest. Our dear departed Rusty won twice in Savy Senior and last year was voted fan favorite as well.  This year, we entered Dasher in the Seattle's Top Dog contest, where he finished second among 60 dogs.  He might have finished first had the judges not noticed that we brought a rather large and loud rooting section. Congratulations Dasher, on a smashing debut!
Posted by Mike Barer at 5:46 PM 0 comments 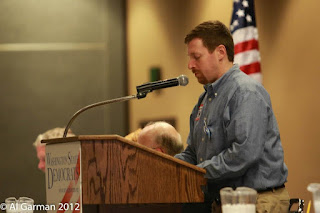 Secretary Rob Dolin (above) reads the role call as the Washington State Democratic Central Committee met in Yakima this weekend.  With representatives from every county and legislative district in the state, business was completed quickly.  The committee passed a resolution paying tribute to former state chair Charles Rolland who passed away earlier this year.  Rolland held the chair position from 1993-1995.  He was the first African-American to hold that position.
In other business, the committee formally nominated Suzan Del Bene for 1st District US House and Troy Kelley for State Auditor.
Smoke from nearby wilderfires was prevalent in the air on what otherwise would have been a perfect sunny day.
Thank you to Al Garman for the picture.
Posted by Mike Barer at 8:19 AM 0 comments

It's a lot of fun when it's our team making the other team's fans angry.  Here is a devoted Cowboy's fan sharing his disgust after the Seahawks pounded Dallas 27-7.  This video made the rounds in the Seattle media, but this is the entire video, raw and uncensored.
Posted by Mike Barer at 9:14 PM 0 comments 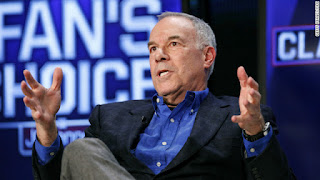 You can watch a football game on Sunday on the various networks and know the score of the game.  But watching a production of NFL Films, you'r part of the game.  Steve Sabol may not have had the best known name in professional sports, but sports fans knew his work.  Sabol and his father, Ed were the creators of NFL Films.  Most widely known for showing highlights of  games from past and present times.  While in football, players wear pads and helmets, they can seem like running robots, NFL Films had the magical ability to personalize the game.
With the deep baritone voice of John Facenda (later Harry Kalas) narrating and a symphony orchestra in the background, you could feel the cold weather as you watched the vapor coming off of the players or watch the mud  on the players' faces as the camera scanned the sidelines on a rainy day.  You would soon realize that football is a game for all seasons with no rain outs.
You soon learned that offensive lineman were more than nameless players, because slow motion could break down a play in a way that live action couldn't.  NFL Films put microphones on the players and the coaches, you could hear the players encouraging each other. Suddenly, you had an action movie.
With the vision of John and Ed Sabol, the NFL became the envy of professional sports.  Sabol was a camera man and producer.  He won multiple Emmys.  His father is in the NFL Hall Of Fame. Steve Sabol passed away this week from cancer.
Posted by Mike Barer at 8:56 PM 0 comments 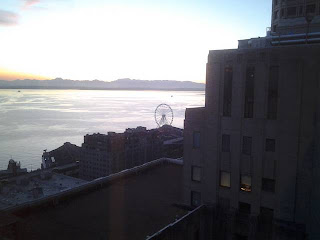 I snapped this picture from the Harbor Club on Second Street in Downtown Seattle.  We were attending a wedding.  You can see the sun setting behind the Olympic Mountains and the great wheel  on the right.
Posted by Mike Barer at 7:40 AM 0 comments 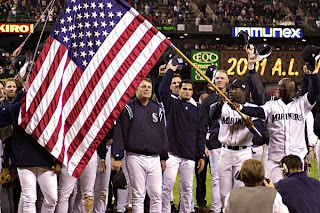 2001 Mariners had just clinched the NL West Pennent, but it was a somber occasion in the wake of 9/11.  From the Dave Niehaus Memorial Page on Facebook.
Posted by Mike Barer at 10:09 PM 0 comments 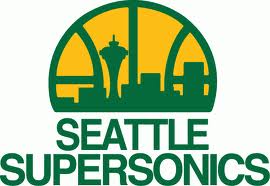 The Seattle Times reports that the Seattle City Council has come to an agreement with Chris Hansen to build a basketball-hockey arena in the Soda area in hopes of bringing the NBA back to Seattle. According to the Times, the terms of the deal will be announced today.   It did say that the deal calls for Hansen to help fund road improvements to ease possible overcrowded streets, a concern of the Port Of Seattle.   The Hansen group also hopes the arena would allow an NHL team to relocate here.
Posted by Mike Barer at 6:04 AM 0 comments

A Very Stirring Moment At The DNC

This moment where former Arizona Congresswoman Gabby Giffords lead the Pledge Of Allegience at the Democratic National Convention was so powerful, I choked up watching it in a wrap on my DVR.  Giffords survived a gunshot wound to her head just a year and a half ago.
Posted by Mike Barer at 2:01 PM 0 comments 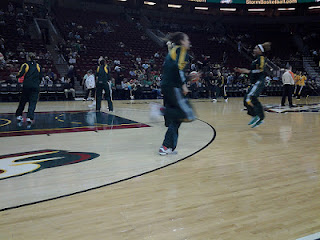 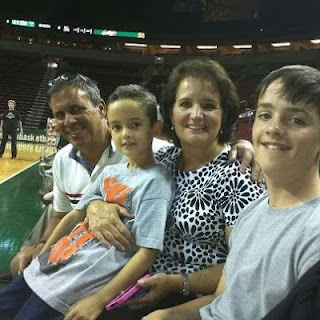 I finally attended my first Seattle Storm WNBA game. My Father-In-Law got tickets for our family to watch the game. Because tickets were acquired through a service organization, we were able to watch the players warm up from the team bench (bottom picture).  In the top picture, Sue Bird.  The players move so fast during warm-ups, it was nearly impossible to get a good pictures.  The Storm soundly defeated the Tulsa Shock 101-74.
Posted by Mike Barer at 6:39 AM 0 comments 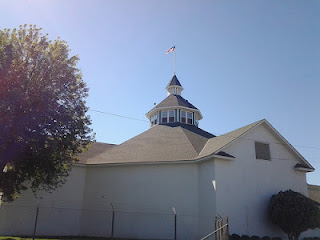 While over in Walla Walla, we were able to visit the Fair, which always takes place over Labor Day Weekend. One of the towns most striking landmarks is the Fair Pavillion.  It has dozens of exhibits, from local businesses to 4-H projects, it is a good snapshot of the city's culture.
Posted by Mike Barer at 6:01 AM 0 comments 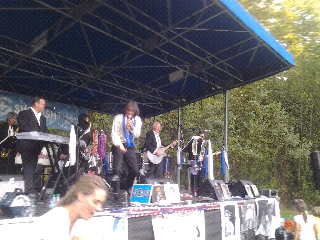 The Pine Lake Summer Concert Series came to an end last Thursday with Cherry Cherry, a band that pays tribute to Neil Diamond.  Named after one of Diamonds early hits, the lead singer, Steve Kelly sang all of the audience's favorites like Song Sung Blue and Sweet Caroline with the trademark Neil Diamond rasp.  When Kelly took a break, the band continued with a blend of blues and hits from years gone by.
Posted by Mike Barer at 11:02 PM 0 comments 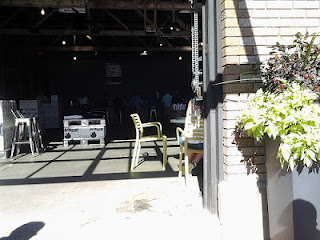 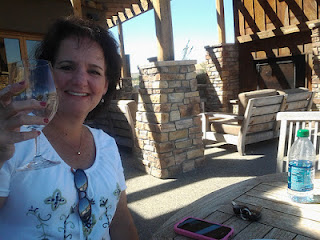 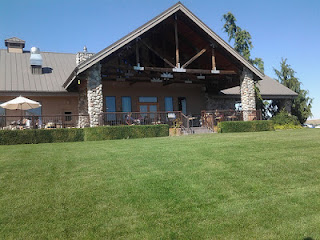 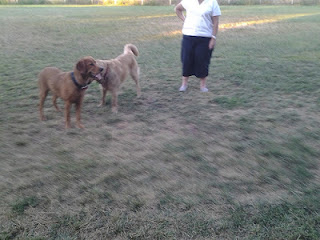 Stops at Three Rivers (second from bottom),Charles  Smith (top)  7 Hills, Waterbrook (second from top), and Bergevin Lane wineries as well as golf and visits to the fair and the Whoopemup Hollow Cafe in Waitsburg  highlighted our trip. We also took Dasher to the Fort Walla Walla leash free dog park (bottom,Dasher is on the right).
A few comments, Three Rivers has the best grounds it also includes a three hole golf course.  It's tasting room is right at the vineyard.  Charles Smith located downtown seems to be the hippest, it's clientele seem young and worldly.  I believe it is one of the newer tasting rooms.  Mark Ryan is another new tasting room, located on Main next to Starbucks.  It has had a tasting room in Woodinville for years.
Seven Hills and Bergevin Lane are old reliables that were around before wineries in Walla Walla were cool.
Posted by Mike Barer at 5:28 PM 0 comments