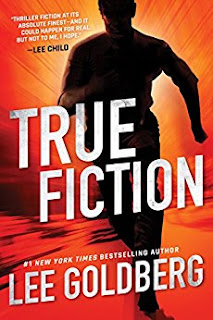 Readers can have fun figuring out what is truth and what is fiction in this crazy romp by TV writer author Lee Goldberg.  Goldberg used his former pen name, Ian Ludlow as a writer trying to escape what he believes is a government plot to destroy him and his unwitting accomplice.
Much of the action takes place in Seattle, but moves down the West Coast as Ian and Margo French try to escape their hunters.
There are inside jokes such as Ian and Margo (a Seattleite originally from Walla Walla) hiding out in a house in the Laurelhurst remarkably similar to one owned by the author's uncle.
The book seems to have a moral that today's social media and electronics can make life easier and connect us, but can also surrender our security and privacy.
There is plenty of the Goldberg observational humor employed in books by both Lee and his brother, Tod.  Both authors can see things that places and situations that most people can not.
According to Lee, the book hit the top of the  Washington Post Best Seller list.  I would highly recommend it. Click here to order.

thanks for the great review. One correction -- the book didn't hit #1 on the New York Times bestseller list, but it did hit the top of the Washington Post list.