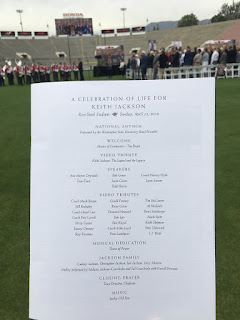 A memorial service for ABC sports broadcasting legend Keith Jackson was held in the Rose Bowl Stadium last Sunday.  Jackson, a WSU graduate and former Seattle area sports anchor, was the nation's voice of college football.  Jackson, who worked 15 Rose Bowls is credited with coining the phrase "the granddaddy of them all", describing the New Year's game.  Jackson lived in nearby Sherman Oaks.
Women's basketball great and widow of  LA Dodger pitcher Don Drysdale, called Jackson "our Walter Cronkite of sports broadcasting" of course referring to the longtime CBS Evening News Anchor  with which most of us grew up.
Posted by Mike Barer at 8:30 AM