Growing Up--Editorial Launches My First Letter To The Editor 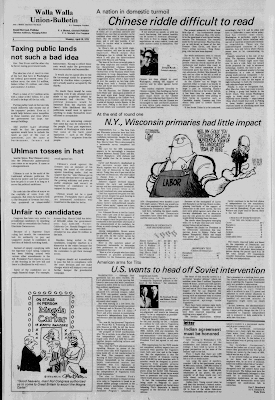 I'm still trying to find the letter, which I will eventually post. After Seattle mayor Wes Uhlman announced his plans to run for Governor of Washington, the Walla Walla UB criticized him in the above editorial, which you may be able to see by clicking on the image.
As a fan of the young mayor, I was inspired to write the letter and it was printed.  Even today, I can see holes in the editorial and feel that it fails to back up it's pretense.
Posted by Mike Barer at 6:53 AM