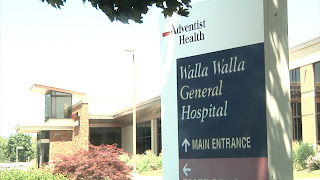 News sources have announced that Walla Walla General Hospital will stop operating on July 24th.  The hospital, run by Adventist Health, has been on South Second Street since 1975, after moving from Bonsella Street near Whitman College.
There had been a plan to transfer services to Providence St Mary, the city's other hospital, but unexpected regulatory changes would have potentially caused delays and prohibited the move.
Providence St Mary Medical Center will be the town's only hospital. It was formerly St Mary's Hospital and was my birthplace.