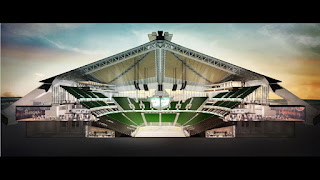 The Oak View Group has been tapped by Mayor Ed Murray to redevelop the Key in an effort to get the two major winter sports in the area.  The group, let by Tim Lieweke and Irving Azoff, was introduced at a news conference.  The leaders announced a partnership with two perspective NHLowners, most likely a deciding factor in getting the nod.  Of course, the long range goal, would be to bring back the NBA. The previous mayor Mike McGinn, partnered with Chris Hanson, in attempting to build a basketball arena in Sodo that would also house Ice Hockey.
The irony to this is that McGinn is again running for mayor, a position he lost 4 years ago.  Murray is not seeking a second term.
The Key Arena is located on the grounds of the Seattle Center, the site of the 1962 World's Fair. It was the home of the Seattle Super Sonics before the team moved to Oklahoma City to become the Thunder.
Posted by Mike Barer at 9:59 PM