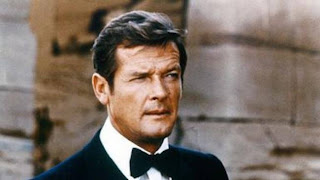 Roger Moore, who played James Bond through most of the 1970s, has passed away at 89.  Although the movie character was originally played by Sean Connery, Moore's persona was pretty much how I perceived the James Bond character. After all, the first few Bond movies that I saw, starred Moore in the lead role.
The suave British actor also played Simon Templar in the TV version of The Saint which was viewed both in America and in England.  He also played the part of Beau Maverick in American TV series, Maverick.    He did the intro to Burl Barer's True Crime Uncensored, of course Burl has written of both Maverick and The Saint.
Moore was knighted  by the Queen in 2003.