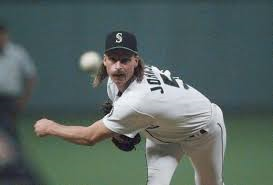 Randy Johnson, the tall dominating left hander who took the heart of area baseball fan's on his shoulders as he pitched the Mariners into the play-offs for the first time in 1995, is now a first ballot Hall of Famer.   Johnson, known as the "Big Unit" for his 6 foot 10 inch frame, pitched for the M's from 1989 to 1998. His pitching record as a Mariner was 103 wins and 74 losses.  He also pitched the M's first no-hitter.
Johnson was elected into the Hall with 534 votes the highest among this year's inductees, which included pitchers Pedro Hernandez, John Smoltz and 2nd baseman Craig Biggio, who played for the Houston Astros.
Posted by Mike Barer at 8:11 PM