5 Walla Walla Department Stores From The Past 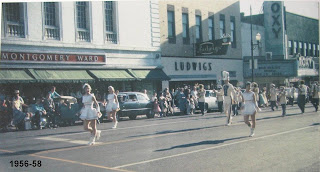 1. Montgomery Wards (picture above)--on West Main--very similar to Sears, which was down the street.  Men, Women, and Children's clothing, toys and an automotive. Also put out a catalogue, much like Sears. One of the first Department stores to leave.
2. JJ Newberrys  Standard department store offerings, a pet department and a soda fountain (common in the 50s and 60s.), I believe that it was gone by the end of the 60s.  The building was turned into a "Mini Mall" now torn down and made into a park.
3. Gardner's--locally owned, oldest department store in the state.  It was on the  corner of 3rd and Main. It carried groceries as well as the standard department store offerings.  Left in late 70s or early 80s.
4. Drumhellers--Run by a pioneer family, it had hardware, sporting goods, furniture and structural steel. On Second and Alder, it anchored the Drumheller Building, where the elevator was hand run by an attendant.
5. Griggs Stateline--I believe it was Tri Cities based. Griggs was located south of the Oregon State Line so Walla Walla residents could shop there and avoid the sales tax.
Posted by Mike Barer at 11:05 PM

I believe Newberry's was around at least through the mid-70's. I recall that it had a great toy selection. It was next to or near the building that once housed the YMCA.

It was definitely gone before the Y left. Anyone have a more factual time?

I remember going there as a child and getting a plate of fries at the counter, it was a great memory.

I don't remember when Newberry's closed, but they used to sell pantyhose in children's sizes. As a little girl, I always looked like a tiny grown-up...☺