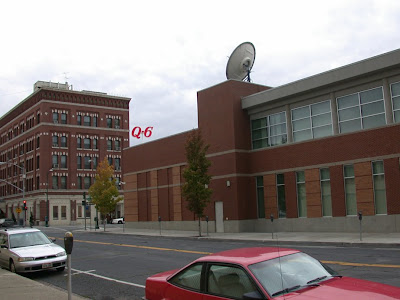 "When you need coal or oil, call Boyle..Fairfax 8 1521...Fairfax 8 1521-"
How easy is it to remember a telephone number these day. It's tough for us to remember our own numbers, let alone a company that you may never do business with. Ask anyone who lived anywhere in Eastern Washington, Oregon, or Idaho during the 1960s what the telephone number was to the Boyle Fuel Co in Spokane and they might say, Fairfax8-1521.
Many decades ago, it was not uncommon for TV stations to have local origination programming. Spokane's KHQ or Q-6 had a talent show on Saturday night, sort of a local version of the "Ed Sullivan Show". Since only larger towns had TV stations, the three Spokane stations had signals that covered the entire "Inland Empire" (there were also three TV stations in the Tri Cities). The Saturday talent show was known as Starlit Stairway and featured local amateur talent from throughout the area. The most memorable part of the show were the twins who sang the sponsor's jingle in perfect harmony.
"For every heating problem for a furnace old or new--just call the Boyle Fuel Company and they'll solve them all for you"
" When you need coal or oil--Call Boyle" Then each girl would recite the phone number
"Fairfax 8- 1521 Fairfax 8-1521." I recently contacted KHQ to see if there was any remaining film of the storied commercial. The answer , according to current KHQ producer Lee Hite, was that the show was done live--there never was a recording except from what we remember almost 40 years ago.
Posted by Mike Barer at 9:39 PM

You are doing a great service
keeping these memories alive.

Do you remember the United Paint Co.programs?

The late Nate Grossman would come out in a tuxedo and play a complex number on the piano and then walk over to a board and brush on a glob of a featured color paint never spilling a drop then return to the piano to continue his playing.

This was done live.

A couple of years ago I spoke to him and he claimed that all was not as it seemed.

KHQ just played a video of the twins singing the Boyle jingle. Maybe you can get a copy. It is Friday the 13th---2012. Cindy Thompson.

If I can find the jingle, on the net somewhere, I would like to post it. Maybe Q put it on "you tube."

It must have had something to do with Q-6 celebrating it's 60th Anniversary.

Nice job Mike! Don't know how many times I think of shows like that or other childhood memories when, "I wonder if anyone else remembers that?" We watched Starlit Stairway with my grandparents every weekend. I also remember a kid from Milton Freewater, Barnes I think, who appeared on the show several times tap dancing. I also remember them finding a new set of singing twins when the first sisters got too old or decided to step down. Boyle didn't miss a beat.

Keep up the good work,

My sister and I sang twice on the show. Our dad accompanied us on the guitar. Mom sewed our costumes. The first time we sang "Going to the Chapel". I was the bride and my sister was the groom. The second time, we sang a song dad wrote called "The River God Made". We won first place both times. We lived in Sandpoint. This was in '67 & '68 I believe. Jaylin Collins Chapman

Thanks for the entry! You're doing a great service to Spokane's television heritage keeping the memory alive.

One thing I would like to add is that the show actually was on KXLY-TV, not KHQ-TV, for most of its run: it premiered on Channel 4 in 1953, and moved to Q6 in 1966 over staffing disputes with KXLY. It remained on Channel 6 for the remainder of its run, before being canceled in 1973.

Ichecked out the link and loved it. Thank you so much. It's another blog to follow!

I also checked upon the Starlite Stairway tapes . I tracked them down to a museum in southwest Spokane. Don't remember the name of the museum or the lady I talked to, but she said the tapes were in the basement but hadn't been gone through yet since they had just moved to their new location. I plan on tracking them down to get a copy of a show for a friend when I retire and have more time.

I was searching Google to see if I remarried the old number correctly. I did. A few years ago I was singing the jingle with a Clackamas County Oregon judge. Playing remember when. He grew up in Spokane, me in LaGrande, OR. Did you post the tape

Every musician wants to do something which will hold up for a long time, and I guess we did it with stairway to heaven. See the link below for more info.

I don't know why, but for the past several days that jingle has been going through my head. My grandparents lived on a wheat farm near Ritzville. When we visited from Boise, we always watched Starlit Stairway. I wondered if Boyle Fuel was still in business so I did a web search and found your site. I just turned 70. It's amazing what you remember for years and years. Thanks for making this available. It would be great to hear that jingle replayed.

Just this morning I was thinking of this song. Actually the PHONE NUMBER!!! I did a search to see if I remembered correctly. I'm 71 and my brother sang on the program. I remember the girls singing the song. Someone said they were twins. It was my understanding that they were from two different families: one from Spokane and the second was from Montana, maybe Deer Lodge. I'm from Columbia Falls and still remember the phone number FAirfax 8 1521. Just like it was yesterday!!! :-) Thanks for posting this.

Was edward kubif a contestant on starlit stairway

My family moved from Seattle to Walla Walla in 1968. Only lived there a year, but I remember that song because my big sister would sing it over and over to annoy me!

I remember the girls and the Jingle, a bit early for me I was able to appar on the Wallaby Jack show for musical chairs.