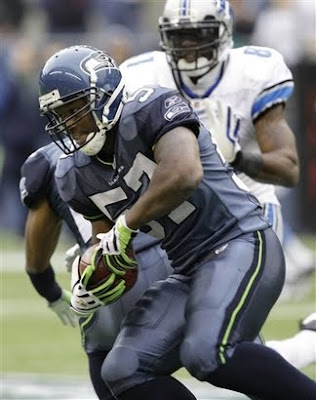 What started as a dismal day for the Seattle Seahawks down 17-0 at home facing the lowly Detroit Lions turned into a victory. The Seahawks offense started with an interception and a lost fumble on it's first two plays from scrimmage. Both times leading two Lion touchdowns.
Matt Hasselbeck, however stayed with the pass hitting 39 out 51 attempts f0r 329 yards.
Hasselbeck ended the day with the team record for career completions. The Seahawk defense had five interceptions, two from David Hawthorne, one from Marcus Trufant, one from Deon Grant and a final one by Josh Wilson that was run in for a touchdown to seal the deal.
Posted by Mike Barer at 4:37 PM