"The King And I" Playing At Issaquah's Village Theatre 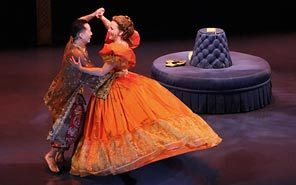 I watched "The King And I" with Deb, her parents and grandmother last Thursday at the Village Theatre in Issaquah. I had seen the Rogers And Hammerstein production as a second or third grader at the Little Theatre in Walla Walla.
The premise to the story, based on a true story, is an English school teacher coming to Thailand to teach the Royal children. It is focusing on the clash of Western and Eastern culture, however many of the issues presented in the production seem very relevant even today in American culture. The King, played brilliantly by Michael Lee is a power hungry, greedy but clumsy despot with 37 wives, lovers, etc. Ana, played by Beth DeVries is appalled by the degradation, not only of women, but of the King's subjects. She somehow also see that somewhere, the King has a heart and that sets up a wonderful production.
Posted by Mike Barer at 3:11 PM

Email ThisBlogThis!Share to TwitterShare to FacebookShare to Pinterest
Labels: Issaquah, The King And I, Village Theatre