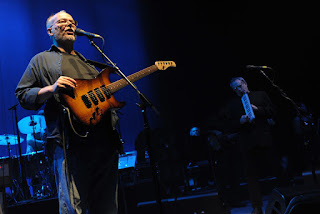 Even though the decade of the 1970s has the historical connotation of being the "Disco" decade, it really was the crossroads of popular music.  James Taylor and The Eagles introduced a soft folk type rock.  Bands like Deep Purple and Led Zeppelin brought hard rock into vogue.  Bands like Steely Dan introduced an instrument rich pleasant to listen to pop sound that would stand the test of time.  Guitarist Walter Becker, who with lead singer Donald Fagen, found Steely Dan, died this weekend of undisclosed causes.
Steely Dan played the Jazz Rock hit "Rikki Don't Lose That Number" one of my favorite songs of all time.  They brought in sounds and songs never heard before in Pop music and were a staple on progressive and underground FM radio stations.
I saw them twice in concert.
Posted by Mike Barer at 7:42 PM

Thank you for this