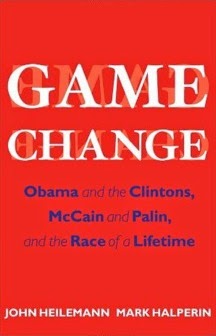 I began to read Game Change, thinking that it's focus would be on Governor Sarah Palin, the Vice President choice on the losing ticket who became well known in her own right, but really the McCain-Palin dynamic, interesting as it was, is not brought up until the last few chapters.
Game Change tells about the 2008 race, Americans have lost their faith in the Bush administration over both his handling of the Iraq War and a looming financial crisis.  The Democrats, after regaining the majority of Congress, are optimistic about recapturing the White House.  The favorites are former First Lady Hilary Clinton and 2004 VP candidate John Edwards.  Also in that race is our current president Barack Obama.  The book in it's early stages takes us to each of those campaigns and shows the personalities, not only of the candidates but each family and staff.  It shows how the Democratic establishment was not all in love with Hilary.  It shows the flaws in the Edwards campaign.  It shows how the Obama campaign snowballed into a national movement.
The book moves chronologically through the caucuses that were indeed game changers. Then at the conclusion of the Obama nomination, focuses on his VP choice and his courting of the Clintons.
It then covers the McCain campaign and the Palin choice, once thought to be the spearhead to get McCain back into the race, but what would later prove to be part of his undoing.
The McCain-Palin dynamic was the subject of the movie that was based on the book.  I hope to eventually watch that movie.
Posted by Mike Barer at 7:07 AM