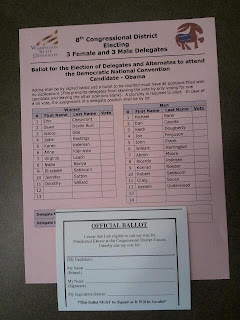 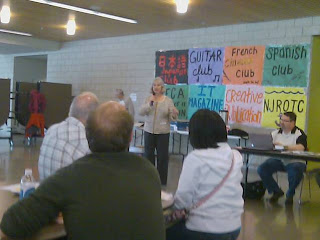 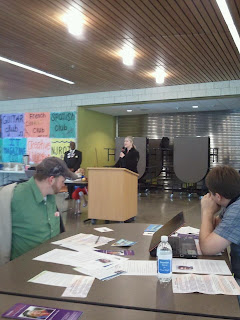 Delegates to Washington's 8th Congressional District Democratic Caucus met last weekend at Issaquah High School.  Upon parking our cars, a constant POP POP could be heard, oddly enough the Issaquah Sportsmen's Club ( a rifle range) is around the corner from the high school.
Delegates to the National Convention is Charlotte  were picked although my entry (above) fell short.  It was a great experience though and I will try again in the future.  Democratic candidate for Secretary Of State Kathleen Drew stopped by from Olympia (center), Drew represented the 5 in the state senate in the mid 90s.  Karen Porterfield, making her first run for office, spoke to us (bottom) and was nominated unanimously to challenge Republican Dave Reichert to represent the 8th district in the House Of Representatives.  Thanks go to Konrad Roeder for the top and bottom pictures.
Posted by Mike Barer at 10:59 PM