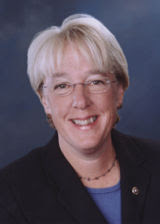 Blogger Chris Bowers has reported that Washington Senator Patty Murray may be under consideration for a spot on the Obama ticket. The three term US Senator has been a Hilary Clinton supporter throughout the campaign and the Obama camp may be thinking of her as a means to pick up support from working class women.
This is not the first time a Washington senator has been considered for Vice President, the late Scoop Jackson was reportedly promised a spot on the Kennedy ticket, but was dumped because Lyndon Johnson brought Texas and more votes into the Democratic ticket.
Posted by Mike Barer at 6:11 AM