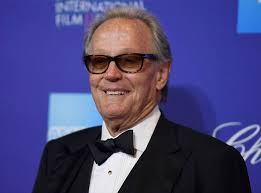 In a sad a coincidence,  in the weekend when the 50th anniversary of Woodstock was being observed, Peter Fonda, who co-wrote and starred in the movie Easy Rider, also emblematic of the counter culture and also released 50 years from last month, has died of  lung cancer, he was 79.
Fonda was from an acting family, his father was beloved actor Henry Fonda.  Sister, Jane Fonda was known as much for her protesting of the Viet Nam as for her many screen roles and daughter Bridget had a strong film career in the 1990s.

Great post Mike. I remember with fondness seeing Dirty Larry, Crazy Mary at the drive in.