Inslee To Run For 3rd Term

Hot off his unsuccessful run for President, Jay Inslee has announced that he will seek a third term as Washington governor.
The last Governor of this state to serve 3 terms was Dan Evens. Evans was elected to his 3rd term in 1972.
Inslee's predecessors, Gary Locke and Chris Gregoire, both retired from the position after two terms. 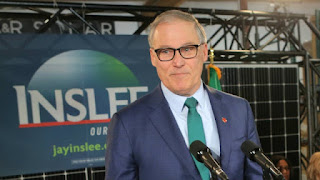 Great post Mike. I am glad he is running. He has done a great job for our state.