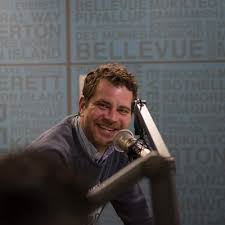 For viewers and listeners of media, sudden departures of air personalities is not an uncommon occurrence,  however, I was taken aback that Zak Burns, who hosted KIRO Nights on 97.3 KIRO left the station.  There seemed to be no indication of any trouble.
Burns started on air as a partner to Jason Rantz, a Conservative, who went solo for years in the slot after Ron And Don, the station's long running afternoon drive show.
When Rantz left to take over the morning position at KTTH, Burns became the host.  Burns seemed Liberal, but seemed more focused on entertainment and pop culture. although  news headlines were touched on.  His co-host, Gee Scott has taken over main host.
The show would begin with the sax solo in the Marvin Gaye classic, "What Goin' On".  Burns, on the show, alluded to past addictions and that his dad was  a former NHL player.
A couple inquiries to KIRO employees  did not result in finding any reason behind Burns leaving the station.
Posted by Mike Barer at 8:23 AM