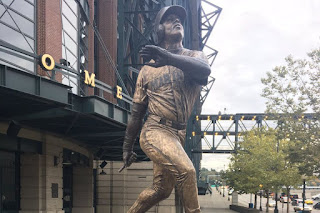 The Ken Griffey, Jr statue at Safeco Field was vandalized yesterday. The bat was snapped off in the evening hours.
Police were able to take a suspect into custody and recover the bat.  The vandal somehow took the bat from the statue, leaving the rest in tact.
Reports say that Mariner officials are in touch with the artist to find out if a seamless repair can be made.
The statue honors the Mariner Hall Of Fame centerfielder, who is credited to saving baseball in Seattle and is considered one of the best to ever play the game.