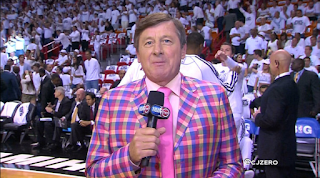 NBA sideline reporter Craig Sager died after a battle with leukemia.  A veteran with Turner Broadcasting System, he is probably remembered by most sports fans for his crazy suits.  His death came just 2 days after being inducted into the Sports Broadcasting Hall Of Fame.
My memory came from the days when Sager was anchor of a late night sports report on CNN in 1980 or 1981.  I was a senior at WSU.  I would watch the report from my Pullman apartment.  One day, I read in the school newspaper a quote by the "late" Leo Durocher.  I was sure that Durocher was still alive, so I called CNN after getting the number from 411. Remember, there was no Google.  I asked for sports and the phone was answered "sports Sager" I asked if it was Craig Sager and he said he was.  I told him how excited I was to talk to a big time sports announcer.  He said something like "let me know when you do".  He then assured me that Leo The Lip was alive and well. It goes to show just something as simple as picking up a phone can create a lasting memory.
Today, with the rise of ESPN, I don't believe there are any sports on CNN, but Sager was able to stay in the Turner Broadcasting System for 4 decades.
Posted by Mike Barer at 10:00 AM