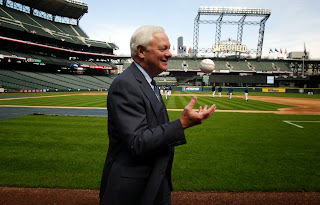 Chuck Armstrong, who many hold as the reason for the team's continued on-field woes, has stepped down from his position as President of the Seattle Mariners.  Armstrong has been running the organization since 1993 when a group of prominent local business leaders along with the Nintendo Corp Of America (headquartered in Redmond) bought the team to prevent it's relocation.  Armstrong also served as president when California real estate developer George Argyros owned the team in the early 1980s.  When Indianapolis businessman Jeff Smulyan purchased the team, Armstrong stepped down.
Armstrong ran the organization when the team set the one season win record at 116 and during the  miracle run of 1995, however, many blogs and sports talk show hosts have vilified him for not doing enough to pull the team out of a twelve year slump.
He is also credited with the team drafting Ken Griffey, Jr,  universally agreed to be the best Mariner of all time.
Posted by Mike Barer at 5:40 PM