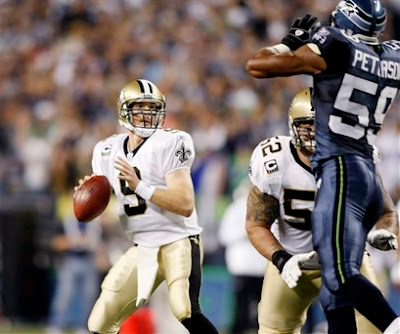 For the second straight week, the Seattle Seahawks turned in a shabby performance. However this week, it was for the home fans and a National audience as the New Orleans Saints defeated the 'Hawks 28-17.
It was clear from the opening drive that this would not be a Seahawk night when the normally reliable punter, Ryan Plackemeir dropped a snap that led to the first Saint touchdown. The game also had to be stopped for 10 minutes in the first quarter when an overhead TV camera line snapped.
The Saints were 0 and 5 before tonight's game. Next week the Hawks play another winless team at home, the St Louis Rams.
Posted by Mike Barer at 9:35 PM