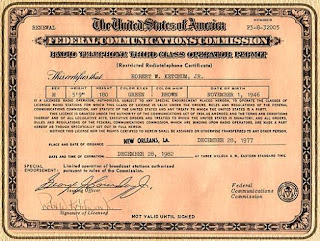 My goal as a child was to get into radio.  It may be because as I remember, the tower of KTEL, a few blocks away, was visible from the house on Leonard Street where we lived until 1965.   It could be that when we moved to a new house, I had the bedroom that once belonged to Bob Garred, who had gone on to become a national radio voice before his passing. It may have been the memory of  my dad taking me to KTEL, back when we lived on Leonard to visit Burl, who at the time, was working as a Rock And Roll DJ at night and on weekends, while going to high school during the day.
At the time, to get a radio job, you needed a 3rd Class FCC Radio Telephone License with Broadcast Endorsement.
When I started my Junior year of High School, I studied to get my license.  To get the 3rd Class License, I had to pass elements 1 and 2 which were very easy, but element 9 was rather difficult and I was not great at passing tests..
During Spring vacation, we went to the Seattle area, of course we were all in Walla Walla at the time.  We stayed at the Thunderbird in Bellevue, which eventually would become one of the two Red Lions in that town, it would eventually become the Doubletree and then, later, be torn down for high rises.  The test was administered on certain days at the Federal Communication Commission  on the 32nd floor of the Federal Building in Downtown Seattle.
Both my sister and I were dropped off at the Federal Building to take the course.  I knew that I passed elements 1 and 2, but was not sure about element 9.
I found out that I passes all three elements and received the license looking like the one above, my sister passed elements 1 and 2, but was unable to get a broadcast endorsement.  Her's looked like this 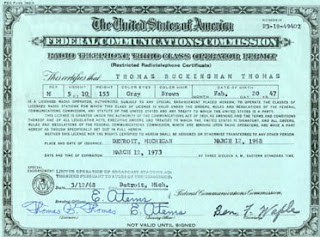 When I got my first radio gig, it was a KUGR at WSU.  The license was not needed because it was heard on the cable system, rather than the "air".  I remember that was so the station could play commercials, giving valuable experience to a radio sales force and to production engineers.
I finally got a gig at KTEL where I did need my third phone, which I proudly posted, but I was mad to find out a few months later that operator licenses where being phased out and operated were getting a permit in the mail with no test needed.  I believe today, operators at any level are not licensed.
Posted by Mike Barer at 10:57 AM