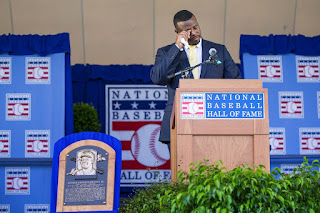 Ken Griffey, Jr choked back tears and thanked his parents, coaches, children, and teammates as he became the first player to be inducted as a Mariner. He also thanked former teammate Randy Johnson, a fellow Hall Of Fame player who entered as a Diamondback.  Not to be left out was Jay Buhner, who was Griffey's closest teammate.
Griffey was so great, that you never wanted to leave your seat when he was up to bat. Of course when he was in the field, he made spectacular catches.  He wore the number 24, the same number of another great centerfield with whom he is also compared, Willie Mays.